‘They have been wiping out the whole profession’ — Radio Free Asia 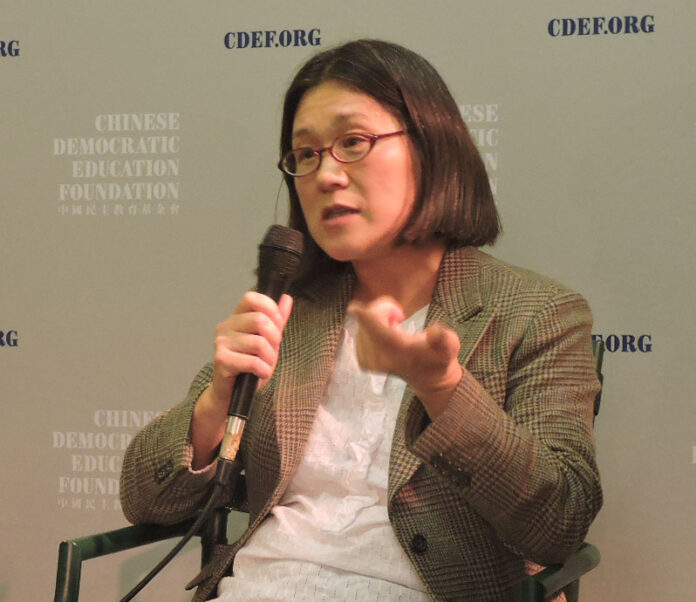 Yaxue Cao, editor-in-chief of the U.S.-based website China Change, has been tracking human rights issues in China for years. With the help of human rights attorneys in China, dissident artist Ai Weiwei, professor and film-maker Ai Xiaoming and overseas-based rights activist, she recently released an hour-long film about the crucial role played by Chinese lawyers in defending people’s basic rights. The documentary, titled “The Defenders — 20 Years of Human Rights Lawyers in China,” offers rarely-seen footage of top rights attorneys including Li Heping, Jiang Tianyong and Pu Zhiqiang to an overseas audience. Cao spoke to RFA’s Mandarin Service about the project:

RFA: How long did the film take to make?

Yaxue Cao: There were only two of us [making the documentary]. I wrote the script and collected and selected the material, while video editor cut it all together and added subtitles. Production started last year, and it took us three months in all.

RFA: This documentary spans a long period of time. How did you find all of the footage and the interviewees?

Yaxue Cao: The main point about this film is that it is based on existing footage. Half of the footage we use comes from interviews carried out for China Change, while we also collected a lot of footage, still photos and audio from news organizations and other films, including [two] made by Ai Xiaoming and Ai Weiwei’s long interview with lawyers Li Heping and Jiang Tianyong in 2011. There were also some images of lawyer Pu Zhiqiang in [another] documentary. The fact that they were willing to share this material with us was a huge help.

RFA: According to my calculations, at least 33 lawyers appear in this film in some form. What kind of people are they?

Yaxue Cao: Well first of all, there should be more than 300,000 lawyers in China, but even at the peak [of legal representation], when human rights lawyers were most active, there were only about 300 of them. But people have quit or stopped speaking out under successive rounds of repression, while others do the work but don’t want to be referred to as a human rights attorney. For example, more than 20 lawyers defended [pro-democracy agribusiness mogul] Sun Dawu, but none of them were in contact with us, or with the Chinese Human Rights Lawyers Concern Group. Nonetheless, to me, they were still human rights lawyers.

The main thing that makes human rights lawyers special is their bravery. They make up just one in every thousand lawyers [in China], maybe not even that much nowadays. These one-in-a-thousand lawyers dare to take on these cases and go to court to uphold justice according to the law, yet they are risking their livelihoods and putting themselves in personal danger, through arrest or being beaten up, to do so.

The other thing is that some people criticize them, saying they are unskilled lawyers, which is a term commonly used by the authorities. But I think they’re the most skilled lawyers of all. A lawyer who can defend their client in a country that lacks rule of law, with a number of other things against them as well, has reached a very high level, both morally and legally.

RFA: How has the situation of Chinese human rights lawyers changed in the past 20 years?

Yaxue Cao: The suppression started as soon as they started working. For example, at the beginning of my film, I mentioned the disappearance of Gao Zhisheng, who has been “disappeared” for three out of the last five years. We don’t know whether he is alive or dead. Then we have Li Heping, who was kidnapped and beaten up, then the [jailing of] Xu Zhiyong of the New Citizens Movement. He’s not a practicing lawyer, but he played an important role in the development of human rights lawyers [as a profession].

In 2008, a group of human rights lawyers who had defended Tibetans, defended families in Sichuan, or fought for direct elections to the Beijing Lawyers’ Association had their licenses revoked back in 2009 and 2010.

Kidnapping, torture, detention, and revocation of licenses has been used against human rights lawyers all along, but the turning point was the mass arrests of July 2015. Before that, it was more a question of focused and individual attacks. But in the years since the 2015 crackdown, they have been wiping out the whole profession.

This group consists both of the lawyers who were arrested during the July 2015 crackdown, and the lawyers who defended them. In all, more than 40 lawyers have had their licenses suspended or removed since 2017. The authorities want to eliminate them altogether.

There are other things that also create a chilling effect, like banning media interviews, forcing people to switch their lawyer in favor of a government attorney, and the use of non-disclosure agreements. So a lot of lawyers, while they may be working human rights cases, daren’t talk about them. There are far fewer new human rights lawyers joining their ranks now, which is the result of continual suppression ever since July 2015.

RFA: That makes records like this film all the more important.

Yaxue Cao: Yes, it does. During the production process, as the person who wrote the screenplay, I felt somewhat numb and dull about the whole thing, but just imagine how someone who isn’t really familiar with the topic, with what human rights lawyers in China do, who they are, would feel. I think it would be quite shocking.

There were many layers to this film while I was writing the script. Some lawyers liked to talk about defending clients in court; others talked more about their ideas. Jiang Tianyong talked about suffering extreme abuse in detention, and the despair he felt then. But he also said the situation was totally unacceptable. And the way to break that pattern is to make sure more people know about it.

That’s why we made this film … so more people will get to know these lawyers, to hear about what they said or did, and want to support them, at least morally.