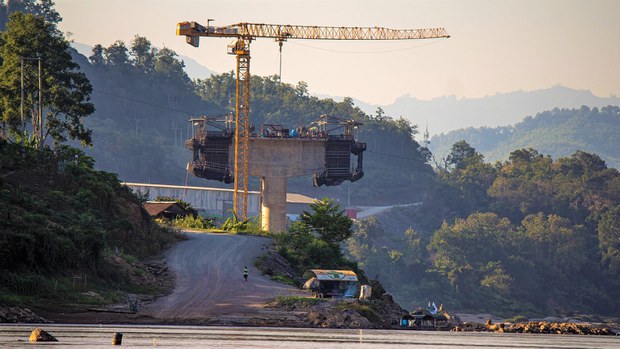 Laos is set to sign agreements with Thailand to sell electricity from three dams being built on the Mekong River, despite opposition to the projects’ construction voiced by villagers and NGOs, according to Lao and Thai sources.

The agreements between the two countries name the Luang Prabang Dam, Pak Beng Dam and Pak Lay Dam, all in northern Laos, as the power sources, sources say.

“All of these projects are moving forward,” an official of the Lao Ministry of Energy and Mines told RFA on Thursday, speaking on condition of anonymity for security reasons. “The dam developers are ready to begin construction of those dams as soon as the power purchase agreements are signed.”

The agreements between Laos and Thailand are scheduled to be signed in May this year, according to a March 15 report in the Bangkok Post.

Developers of the Pak Beng Dam are now making changes to the dam’s design, however, and the Lao government has not yet finished a Heritage Impact Assessment (HIA) required for the Luang Prabang Dam by UNESCO, RFA’s ministry source said.

Developers will provide missing or incomplete documents if work on any project is delayed, the official said. “And the Thai side will then decide when and which dam will enter their market.”

Speaking to RFA this week, Lao villagers and NGO representatives in Thailand reiterated their opposition to the proposed dams, pointing to negative effects on the region’s ecosystem and the planned displacement of thousands of villagers living downstream.

“People here are opposed to the dams, especially the large dams, said one villager living in Oudomxay province’s Pak Beng district near the site of the planned Pak Beng Dam. “They don’t want the dams because they are the ones who will be affected.

“However, here in Laos they just discuss their opposition among themselves and not with the authorities,” the villager said, speaking like RFA’s other sources in Laos on condition of anonymity.

“There will be too many damaging impacts,” agreed a villager living near the Luang Prabang Dam site in Luang Prabang province’s Chomphet district. “Most villagers here don’t want this dam to be built, because the Mekong River is the main source of food for their families. If this dam is built, all our fish will disappear.”

Hannarong Yaowalerd, chairman of the Foundation for Sustainable Water Management in Thailand, said that Thailand should wait for more studies to be completed before signing deals allowing the proposed dams to begin operations.

“The Pak Beng Dam needs to be technically improved,” he said. “And as for the Luang Prabang Dam, the most concerning issue now is the impact it may have on Luang Prabang Town, a UNESCO World Heritage Site. We don’t need to sign the agreements now.”

The Thai government is now pushing for the agreements to be signed because it wants to satisfy the interests of the dams’ developers, Yaowalerd said.

‘Not listening to concerns’

A representative of the Love Chiang Khong Group, a Thai NGO in Chiang Rai province bordering Laos, meanwhile said the Thai government is refusing to listen to the concerns of Thai people likely to be affected by the dams.

“They don’t care about cultural, historical or heritage sites. They also won’t care about damage to the ecosystem,” he said, also declining to be named. “The Mekong River is common property. Everyone depends on it.

“The government’s Procedure for Notification, Prior Consultation and Agreement (PNPCA) is only ceremonial and meaningless,” he added.

According to the website of the Mekong River Commission (MRC), a multi-nation group monitoring water flows and other conditions on the river, the Luang Prabang Dam built in Luang Prabang’s Chomphet district by Thailand’s Xayaburi Power Company and PetroVietnam Power, will cost $3 billion and displace 2,285 villagers.

Construction of ports, a workers’ camp, power lines and water supply for the project are now complete, “and all heavy equipment has been brought in and an access road now 80 percent finished,” a Chomphet district official told RFA on Friday.

The Pak Beng Dam, built by China Datang Overseas Investment, will cost $2.4 billion and affect 5,726 villagers, according to the MRC. An access road to the dam’s work site is now also in place, an official of Pak Beng district in Oudomxay province said.

And the Pak Lay Dam, built in Xayaburi province by Gulf Energy Development and a Chinese state enterprise, Power China Resources Ltd., will cost $2.13 billion and affect 4,800 villagers in the province. “A road, power line, water supply and workers’ camp are now 80 percent complete, and some heavy equipment is now in place,” a district official said.

Laos has staked its future on power generation in a controversial bid to become the “Battery of Southeast Asia,” exporting electricity from more than 50 large and small-scale dams on the Mekong River and its tributaries.

Though the Lao government sees power generation as a way to boost the country’s economy, the projects have faced criticism because of their environmental impact, displacement of villagers and questionable arrangements.