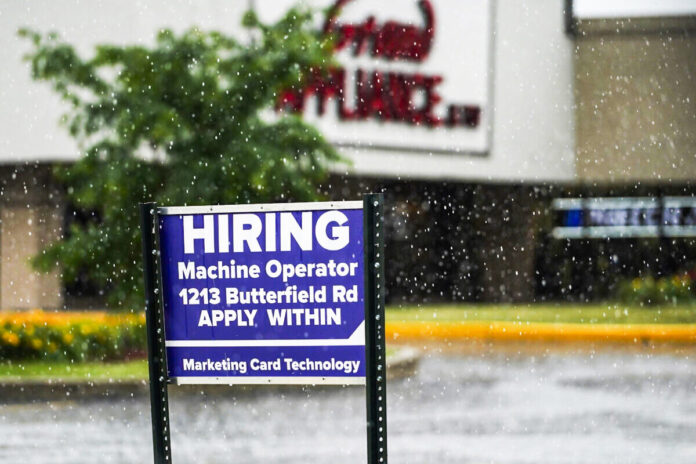 The number of Americans filing for unemployment benefits declined by 214,000 last week, reported the Labor Department on March 17, a sign that the demand for workers remains elevated amid an ongoing labor shortage.

The figures for the week ending March 12 fell from an upwardly revised 229,000 a week earlier, as layoffs continue to fall amid a strong job market rebound.

A year ago, that number was more than 4 million.

Earlier this month, the government reported that employers added a robust 678,000 jobs in February, the largest monthly total since July. The unemployment rate dropped to 3.8 percent, from 4 percent in January, extending a sharp decline in joblessness to its lowest level since before the pandemic erupted two years ago.

American businesses posted a near-record level of 11.3 million open jobs in January, which has improved many workers’ flexibility and wages, but has added to inflationary pressures.

The report comes at an increasingly uncertain time for the U.S. economy, with a new tightening plan by the Federal Reserve, lingering remnants of the pandemic, and the Russia-Ukraine war, which has threatened to push soaring inflation even higher.

“The stability of the job market stands in stark contrast with the high degree of uncertainty the world is facing with the war in Ukraine, high inflation, and the prospect of further supply chain disruptions with China’s efforts to get COVID under control,” said Mark Hamrick, senior economic analyst at Bankrate.

“Federal Reserve Chairman Jerome Powell just told us that the risk of recession is ‘not particularly elevated,’” said Hamrick.

Last week, the government reported that consumer prices jumped 7.9 percent over the past year, the sharpest spike since 1982.

The Federal Reserve announced on March 16 its effort to tame the worst inflation in 40 years, raising its benchmark short-term interest rate and signaling up to six additional rate hikes for later this year.

The Fed hiked its key rate by 25 points, which was previously stuck at near zero since the pandemic hit the economy in 2020, causing a global recession.

The move is the start of an era of higher interest rates, meaning that rate hikes will eventually mean higher loan rates for many consumers and businesses.

The rate hikes run the risk of a slower economy.

The central bank’s policymakers expect inflation to remain elevated at 4.3 percent at the end of the year, according to its quarterly projections.

Associated Press contributed to this report.