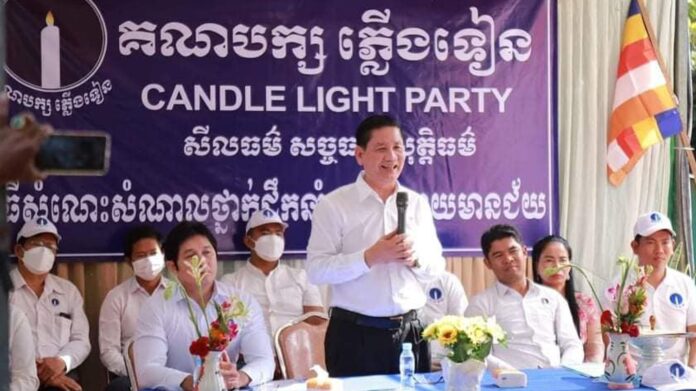 Cambodia’s Ministry of Interior Friday accepted a small opposition party’s request to try to prevent political intimidation ahead of June’s local elections, the party said in a statement.

The Candlelight Party, formerly known as the Sam Rainsy Party and the Khmer Nation party, was founded in 1995, and merged with other opposition forces to form the Cambodia National Rescue Party (CNRP) in 2012.

But in November 2017, Cambodia’s Supreme Court dissolved the CNRP in a move that allowed Prime Minister Hun Sen’s Cambodian People’s Party (CPP) to win all 125 seats in Parliament in a July 2018 election.

The Candlelight Party has been growing quickly over the past year and some believe may present a challenge to the CPP.

During Friday’s meeting between Candlelight Party Vice President Thach Setha and Ministry of Interior Secretary of State Sak Setha, the ministry accepted the party’s request to take effective measures to prevent intimidation of its members to preserve the integrity of upcoming elections, the party statement said.

The ministry will also look into the recent arrests of two party activists.

The party also requested the creation of a joint committee — to be made up of the parties registered to participate in elections, the National Election Commission (NEC), and representatives of the government — to resolve election-related disputes.

The ministry refused but said it would ask the NEC to work on election issues more effectively.

“As a result of this meeting, I can see we have similar intentions to prevent intimidation before the election,” Thach Setha told RFA’s Khmer Service. “I wanted to have direct talks to resolve this issue to prevent it from getting worse.”

The Committee for Free and Fair Elections in Cambodia (Comfrel) welcomed Friday’s meeting. Kang Savang, a Comfrel monitor, told RFA that local authorities have failed to perform their duties with neutrality.

“Some local authorities abuse their power and are not neutral so there must be measures against them,” he said.

At least three Candlelight Party activists have been arrested, and many more have been prevented from registering to compete as candidates in the upcoming election. To date, the party has registered 1,652 candidates across the country for the June election but has not decided on whether it will participate in the election.

RFA was unable to reach Ministry of Interior spokesman Khieu Sopheak for comment. But he told the local newspaper the Khmer Times that the ministry is gathering evidence connecting the Candlelight Party with exiled CNRP leader Sam Rainsy.

Sam Rainsy, 72, has lived in France since 2015 and was sentenced in absentia last year to 25 years for what supporters say was a politically motivated charge of attempting to overthrow the government.

The ministry spokesman said political party laws prevent found to have violated Vietnamese law to establish or be involved with parties.

“You can do whatever you want, but don’t break the law. Be careful the party might be dissolved,” he said.

In a Feb. 23 interview with RFA, Sam Rainsy said it was unnecessary for him to call for people to support Candlelight.

“We don’t want them to find any excuse to cause us trouble. We don’t need to talk lot about it,” he said.

Candlelight’s Vice President Thach Setha has also denied that Sam Rainsy is behind the party. He said that its members are competent enough to run the party without him.

Translated by Samean Yun. Written in English by Eugene Whong.