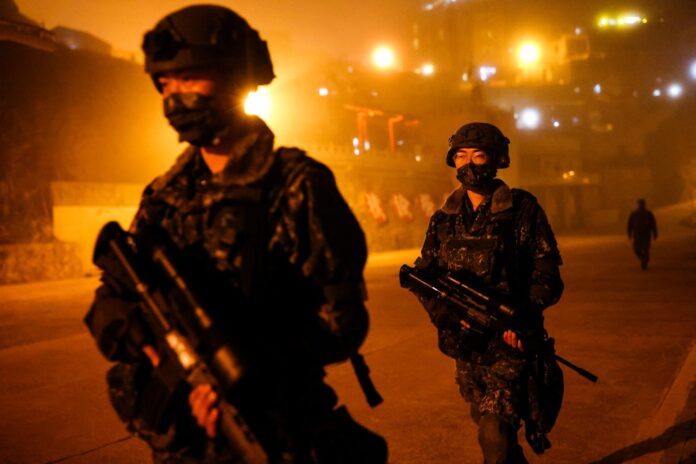 Taiwan held live-fire drills Wednesday on two of its islands not far from mainland China, part of a series of exercises to be held to boost combat readiness.

Media sources said more military drills are being planned this month by the Taiwanese military, including at the Pratas islands (also known as Dongsha) in the South China Sea.

According to the Taiwanese Ministry of National Defense, live-fire drills took place at dawn in Dongyin and Penghu – two of Taiwan’s outlying islets very close to mainland China.

Dongyin is part of the Matsu archipelago, 50 kilometers (30 miles) east of China’s Fujian province. It is about 185 kilometers (115 miles) northwest of Taiwan mainland.

The Matsu islands have been under Taiwan’s control since the end of the Chinese Civil War in 1949.

Dongyin is Taiwan’s northernmost point and the “most strategically important outlying island,” according to Sheu Jyh-Shyang, a military expert at the Taiwan’s Institute for National Defence and Security Research.

It is also important for reconnaissance as “it is close enough to China to detect aircraft and vessels,” said Sheu.

Dongyin is also vulnerable to attacks both from the west and the south due to its proximity to China. It was in fact often shelled by China during the late 1970s.

The Taiwanese defense ministry confirmed that on Feb. 5 a Chinese Y-12 light twin-engine civilian aircraft flew closely to Dongyin but did not enter Taiwan’s air space.

Ian Easton, senior director at the Project 2049 Institute, a U.S. think-tank, said at that time that the flyby was “classic political warfare.”

“Chinese authorities sent a civilian aircraft over one of the most dangerous and heavily fortified islands on the planet,” Easton wrote on Twitter.

“If Taiwan shoots, it provokes an armed response. If Taiwan shows restraint (which it did), it looks and feels weak.”

The Dongyin live-fire drills, named “Loyalty exercise,” took place amid concerns about China’s possible opportunistic moves in the region as the Ukrainian war is raging.

On March 10, Taiwan’s Minister of National Defense Chiu Kuo-Cheng warned the legislature’s Foreign Affairs and National Defense Committee that “there are similarities between the situation in Ukraine and Taiwan.”

Chiu, however, was quoted as saying that Taiwan has “a geographic advantage, as the Taiwan Strait is a maritime barrier that is risky to cross.”

According to Taiwan’s military, the drills on Dongyin included both anti-aircraft and anti-ship exercises.

Another live-fire exercise took place early Wednesday morning on Penghu island in the Taiwan Strait. Penghu is 181 kilometers (112 miles) from Xiamen, China. The drills focused on artillery with cannons and M60A3 Chariot tanks.

The Taiwanese coastguard was quoted by the Hong Kong newspaper South China Morning Post as saying that it would stage “annual live-fire drills on March 26 and 31” on Pratas island.

The Taiwanese defense ministry when asked by RFA did not confirm the event.