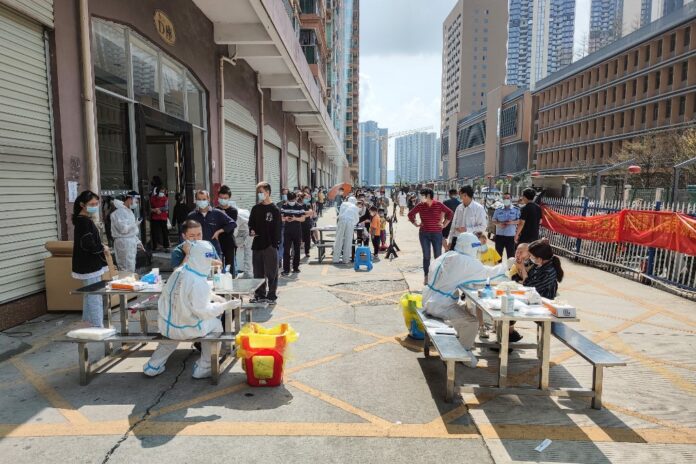 Pandemic lockdowns have prompted dozens of factory closures in the southern Chinese city of Shenzhen, as people continue to leave neighboring Hong Kong in droves amid an ongoing COVID-19 wave.

More than 60 Taiwanese-owned factories including Apple suppliers Foxconn were forced to suspend production amid a weeklong citywide lockdown imposed by the local government in the hope of containing community transmissions of the omicron variant of COVID-19.

Foxconn, which employs 180,000 workers at its Longhua plant alone, later said in a statement it had restarted production after negotiating a “closed-loop” bubble arrangement for its employees.

“Some operations have been able to restart and some production is being carried out,” Foxconn said in a statement, saying employees are still required to submit to quarantine procedures.

“This process, which can only be done on campuses that include both employee housing and production facilities, adheres to strict industry guidelines and close-loop management policies issued by the Shenzhen government,” the company, which makes iPhones as well as parts and accessories for the iPad, said.

China’s National Health Commission reported 1,952 newly confirmed cases of COVID-19 in the past 24 hours, the majority of which were community transmissions in the northeastern province of Jilin, also currently under various levels of lockdown.

Of the 59 newly confirmed cases in Guangdong, Shenzhen reported 55, with the remainder scattered across the cities of Zhuhai, Dongguan, Zhongshan and Shaoguan.

The city has seen the shutdown of an entire district of electronics wholesalers, with Huaqiangbei district now taken over by disease control and prevention officials, police cars and quarantine enforcers.

An electronics industry insider who gave only the surname Chang said shipments of Apple products could still be affected.

“They will definitely be affected, because it’s not just the suspension of production that will affect them but also [shutdowns in] the logistics sector,” she said.

“Pretty much all logistics services in and out of Shenzhen have stopped, so the impact is huge.”

“A lot factories in Shanghai have stopped production,” she said. “You won’t be able to find a precise number online, because the government is now implementing a no-trace policy, meaning that there won’t be any general public notices, but smaller local documents telling people what to do.”

“Taobao merchants are no longer shipping to Shanghai from elsewhere in China,” she said.

An online commentator surnamed Zheng in the eastern port city of Qingdao said the government doesn’t appear to be reconsidering its zero-COVID strategy, despite considerable economic losses.

“They don’t care about the economy or the people; they’re not even thinking about that,” Zheng said. “They are focused solely on their ideology and their targets.”

“They will shut down everything and make people stay home at the first sign of an outbreak,” he said. “The rest of the world isn’t really managing the pandemic, and the U.K. has opened up fully.”

Meanwhile, people are leaving Hong Kong in unprecedented numbers as the city’s government scrambles to contain a mounting COVID-19 outbreak with the highest death rate seen in a developed economy so far.

Net passenger outflows reached 71,350 in February, compared with 15,200 in January and 16,800 in December, with more than 65,300 of February departures registered as permanent residents of the city.

The figures were released as the U.S. State Department raised its travel advice for Hong Kong to the highest level: “Do not travel.”

The exodus comes as the ruling Chinese Communist Party (CCP) imposes its zero-COVID policy on Hong Kong, with inbound passengers forced to quarantine for at least 14 days, with anyone testing positive forced into supervised quarantine camps.