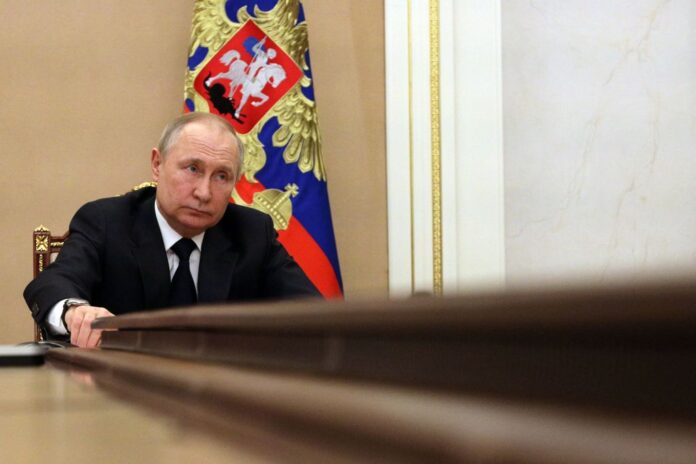 Attorney David Merideth, who listed himself as the plaintiff in the lawsuit (pdf), requested a judgment against Putin, the defendant, and relief in the amount of $10 billion, with the expectation that the International Court of Justice (ICJ) seated at The Hague in the Netherlands will address Putin, whom the lawsuit names as “the criminal.”

“Vladimir Putin (hereinafter Putin) is a ‘war criminal’ for his vicious attack on the Ukrainian people on 24 February 2022,” the lawsuit states. “This is a civil action against Putin and his cronies, John Does A-Z” (John Does yet to be determined).

To be subpoenaed, Putin “might be served deep inside a bunker, in the bowels of The Kremlin,” the lawsuit states. The lawsuit cites Putin’s invasion of Ukraine and the causalities, destruction of infrastructure, and “ripple effect” of “global chaos, instability, uncertainty, economic loss, and physical and mental pain and suffering” as the alleged facts of the case.

Merideth told The Epoch Times that he was motivated to file the complaint after seeing a photograph of a father at a train station in Kyiv holding his hands up to his daughter, who was behind a window on a train going to Poland.

“It was a profound moment to see,” Merideth said.

Merideth said he is seeking a “favorable verdict for the client” that “makes the client whole again.”

“It would be impossible [to make the client whole again] in this situation with the amount of destruction and death, because as we often say, you can’t return a life with money,” Merideth said.

Putin in the Courts

Hypothetically, if the case were to go to trial, Merideth explained that Putin would have to get an attorney in Mississippi to defend his case.

On Feb. 26, Ukraine filed an application instituting proceedings against the Russian Federation before the ICJ—the principal judicial arm of the United Nations—in relation to “a dispute … relating to the interpretation, application, and fulfillment of the 1948 Convention on the Prevention and Punishment of the Crime of Genocide (the Genocide Convention),” the ICJ announced Feb. 27 (pdf).

The ICJ press release states that Ukraine contends that “the Russian Federation has falsely claimed that acts of genocide have occurred in the Luhansk and Donetsk oblast of Ukraine, and on that basis recognized the so-called ‘Donetsk People’s Republic’ and ‘Luhansk People’s Republic,’ and then declared and implemented a ‘special military operation’ against Ukraine.”

According to the press release, Ukraine “emphatically denies” the allegation of genocide.

Like the United States, the ICJ follows a service of process procedure, which requires a representative to notify Putin that legal action has been taken against him. When reached for a more specific explanation on how that would work, the ICJ didn’t immediately respond to The Epoch Times for comment.

“There’s a formula in The Hague we have to follow, then hopefully it would—theoretically speaking—get a representative to knock on the front door of the Kremlin and put it in his hand,” Merideth said. “Wouldn’t that be something?”

A spokesperson for Putin did not respond to The Epoch Times’ request for comment.

“My father once told me that the solution to any legal problem is only limited by the creativity of the lawyer’s mind. So, if you’ve got flexible thinking on something that seems unsolvable, if you think about it long enough, you may figure out how to solve it,” Merideth said. “I’m hopeful that having done this creates a ripple effect or tidal wave of dozens and dozens of others inside and outside the United States to follow.”

Matt McGregor covers news from North and South Carolina for The Epoch Times. Send him your story ideas:
matt.mcgregor@epochtimes.us