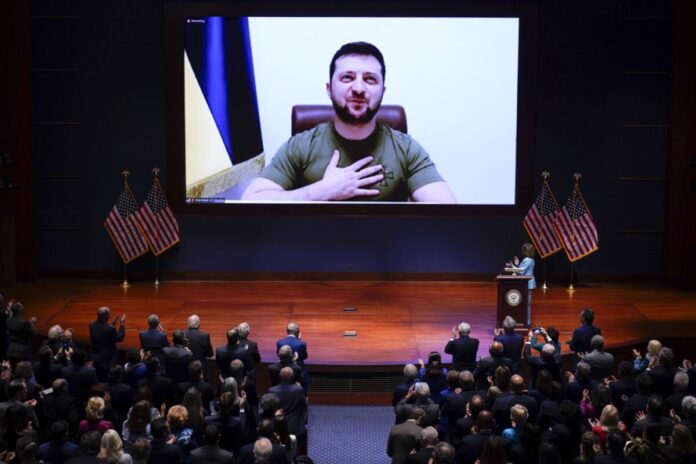 After Ukrainian President Volodymyr Zelensky on Wednesday morning delivered a speech to Congress, members from both parties praised his speech, but remained conflicted on what kind of military and financial aid should be given to Ukraine.

Senate Minority Mitch McConnell (R-Ky.) said after the speech that the Ukrainian president “didn’t mince words,” and added that the speech had “steeled the resolve” of the international community.

McConnell said that the speech showed that Zelensky was in the “master class” of leaders.

Though he called it an “incredibly effective speech,” McConnell said that “the message to President [Joe] Biden is that he needs to step up his game.”

Since the Ukraine crisis began, McConnell has pushed for heavier U.S. involvement in the conflict, increasing military and financial aid to Ukraine, and imposing ever-stricter sanctions on Russia.

During the speech, Zelensky made a reference to the 1941 attack on Pearl Harbor and the Sept. 11, 2001 terrorist attacks, the most catastrophic attacks on U.S. soil.

Senate Majority Leader Chuck Schumer (D-N.Y.) said afterwards that he thought the feeling conveyed by the speech was reminiscent of the way Americans felt in the wake of the 2001 terror attacks.

Speaker of the House Nancy Pelosi (D-Calif.) called the speech “quite remarkable,” and added that the United States is “grateful that [Zelensky] was grateful to United States for all that we have done and what President Biden has done.”

Lawmakers on both sides of the aisle, however, were antsy about providing too much military or financial aid to Ukraine, which they said threatens to raise already-high tensions between the United States and Russia. While Zelensky called for the imposition of a NATO no-fly zone, the White House has opposed the course as a nonstarter.

Sen. Lindsey Graham (R-S.C.), who has pushed for heavier aid to Ukraine since the Russian invasion began, said that he opposed the imposition of a no-fly zone.

However, he did urge the Biden administration “to facilitate the transfer of aircraft, such as MiG-29s, and air defense systems to Ukraine” after Zelensky’s speech.

“While I oppose a NATO no-fly zone, I support enthusiastically sending MiG aircraft from Poland to Ukrainian AF so they can be more competitive in the skies and missile systems in abundance that could neutralize Russian air advantage,” Graham said.

Sen. Roy Blunt (R-Mo.) agreed with Graham on the no-fly zone, opining that it could dramatically increase the risk of an escalation in the conflict.

“President Biden should be doing everything he can to provide lethal aid to Ukraine,” Cruz wrote on Twitter. “Last year, Biden withheld lethal aid twice from Ukraine and has been blocking fighter jets Ukraine needs. Biden is inviting war through weakness.”

Sen. Mark Kelly (D-Ariz.) argued that the United States should neither impose a no-fly zone nor provide aircraft to Ukraine, a move that he indicated would be an inefficient use of resources. Rather, Kelly called for the United States to impose even tougher sanctions on Russia—whose economy has plummeted since the invasion began—and to focus on providing defensive equipment to Ukraine, particularly surface-to-air missiles.

After the speech, Rep. Jason Crow (D-Colo.) simply said that he believes Congress needs “to push for more security assurance” in Ukraine, but he did not elaborate on what that security assistance should be.

Rep. Mike McCaul (R-Texas), the top Republican on the House Foreign Affairs Committee, said: “We need to help Ukraine, give them everything they need to fight this war, and the video we saw was very reminiscent of Nazi Germany.

“History will judge us if we don’t act now and if we don’t act strongly,” McCaul said. “This is not a time for partisan rhetoric; this is a time to unify the nation behind Ukraine against one of the most evil forces we have seen since my father’s war—and that’s World War II, Adolf Hitler.”