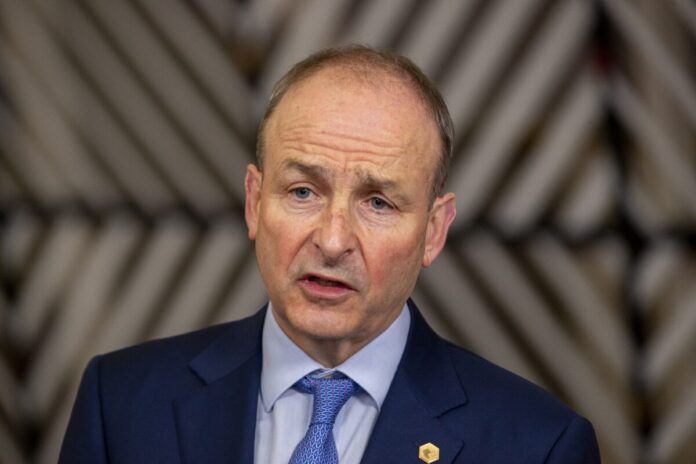 Irish Prime Minister Michael Martin tested negative for COVID-19 on an antigen test on Wednesday afternoon but was tested a second time after a member of his delegation tested positive, according to the Irish embassy. The second test, a polymerase chain reaction—considered more reliable than the antigen version—returned positive.

Photographs showed Martin sitting next to Pelosi at the Ireland Funds Gala and Biden spoke at the event.

The White House and Pelosi’s spokeswoman didn’t respond to requests for comment.

Pelosi is the second in line in the presidential line of succession behind Harris.

The president, who praised Martin during his remarks, was scheduled to meet with him in the White House’s Oval Office on Thursday. They were then both scheduled to participate in a luncheon hosted by Pelosi before a Shamrock presentation at the White House.

An updated schedule has not yet been circulated.

Doug Emhoff, the husband of Vice President Kamala Harris, tested positive for COVID-19 on Tuesday. Harris tested negative but skipped an event at the White House that day out of an abundance of caution.

It’s not clear whether Harris has been tested since then or when Biden has last been tested.

COVID-19 is the disease caused by the CCP (Chinese Communist Party) virus. Most cases are asymptomatic or mild but Biden, 79, and Pelosi, 81, are both in a high-risk category due to their advanced ages. Approximately three out of every four deaths attributed to COVID-19 have been among those 65 or older, according to federal data.

Biden has received three shots of the Pfizer-BioNTech COVID-19 vaccine and recent data suggest the third shot restores much of the waning effectiveness against severe disease, though the effect of the booster also wanes over time.

Biden received the booster in September 2021.

Pfizer and its partner asked U.S. regulators this week for emergency authorization for a second booster for all Americans 65 and older because of the waning protection.

Martin, 61, the Irish prime minister, is staying at the Blair House, according to the Irish government.

“He is feeling well and is currently self-isolating on public health advice,” the government said in a statement on Thursday. “We are exploring alternatives to the in-person program of events.”