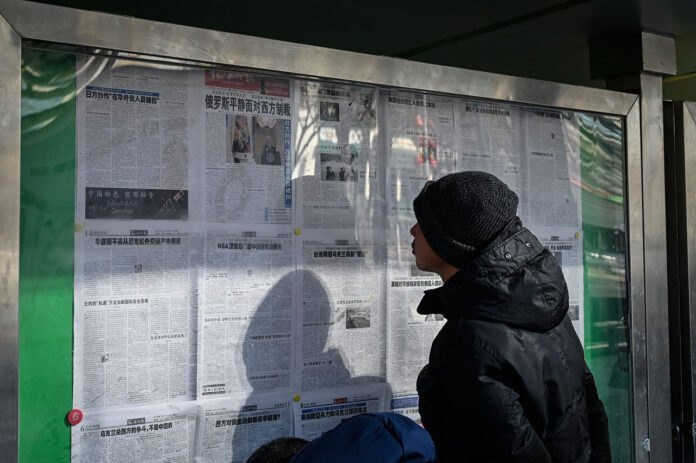 In defiance of CCP propaganda directives banning anti-Russian content from Chinese social media platforms, the Weibo account Ukraine Super Chat on Thursday reposted a subtitled video clip of a Ukrainian man warning Russians not to come and join the war, following the death of his 23-year-old son in Kharkiv.

“Boys, don’t come here,” the man says, facing to camera, addressing Russians. “You will die. You killed my son. I will kill your son.”

The Weibo user who posted the video commented: “A father’s heartbreak … That’s why nobody should start a war casually; there is no way to control the monster once it is out of the box.”

User @Xiaoqiwj commented on the repost: “Shouldn’t we be condemning the aggressors and murderers [not] the other people who are staying in their homes to protect their homes!”

@Jun Weitonghui added: “Curse the evil spirit[s] who started and instigated this war!,” while @Yueying_R wrote: “Kill the common thief.”

“Justice must prevail! Ukraine must win!” @Willing 07621 wrote, while @Ping_Ping_An_Jing_Jing_Huang_Huang wanted to know if Russian president Vladimir Putin would be prosecuted at the International War Crimes Tribunal, asking: “When does Putin go to The Hague?”

Internet censors in China ordered news outlets and social media accounts to avoid posting anything critical of Russia or favorable to NATO after Russia began moving troops across the border into Ukraine last week.

All copy about the war is to be approved by the CCP’s propaganda department prior to posting, while social media platforms are required to delete “inappropriate” comments about the situation in Ukraine.

“A large number of people are applauding the invader Russia,” Jiang said. “They are ridiculing and even gloating over the Ukrainian people who were invaded, which made me very sad to see.”

Some are establishment intellectuals who should know better, Jiang said, while the rest are just following the crowd.

“There is a group who don’t know much, and just follow the guidance of the government to root for Russia,” he said.

Former journalist Zhao Ping said he was taught that most journalism is biased, but should still be truthful.

“Someone once said when I was a journalism student … [that we] report the truth, but only the truth that we choose to report,” Zhao said. “This was a saying that was very popular in journalism training back then in China.”

“But that meant that we were still reporting the truth, even though we were choosing it. Nowadays, we don’t report the truth at all,” he said. “Now, even the official media is tampering with the truth.”

He said state media in China had cut out certain qualifiers from Ukrainian president Volodymyr Zelenskyy’s remarks regarding NATO membership.

“President Zelenskyy said [Ukraine] would have to face up to the fact that it can’t be a member of NATO in the near future … but [Chinese state media] cut the part about the near future out,” he said.

“Chinese news is basically a joke.”

At risk of greater isolation

Wang Jiahao, a doctoral student at the Moscow State Institute of International Relations, said whether or not Beijing actually provides Russia with military aid as reportedly requested, will depend on how the situation develops.

“If Russia is successful in taking Kyiv, it would show that they are capable of completing military operations without China’s help, so the logic would be that China doesn’t need to provide assistance to Russia,” Wang said.

“But if Russia fails to capture Kyiv, there will be a situation of relative stalemate,” he said, adding that China would then have to figure out whether its help would reverse the situation.

Wang said China, in making its allegiance to Moscow, risks greater isolation in the international community.

“If Sino-Russian ties continue to get closer, it will get linked with anti-Russian sentiment, and the European Union will take tougher measures against China,” he said, warning that the war could undermine CCP leader Xi Jinping’s international infrastructure and influence project.

“This will have a huge impact on Chinese investments in Europe, including the Belt and Road initiative,” Wang said.

“Chinese leaders at the National People’s Congress annual session [earlier this month] were very nervous about the impact of the situation in Russia and Ukraine on global economic recovery,” he added.

Chinese journalist Lu Nan said China is unlikely to rethink its relationship with Russia, however.

“Their position isn’t going to change, regardless of whether they support this war implicitly or explicitly,” Lu said. “The Chinese government and Russia are in this together, with this unlimited cooperation agreement, which includes military cooperation.”