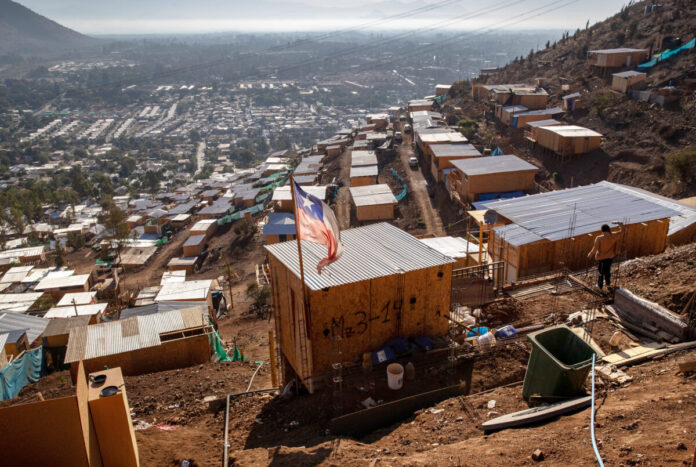 “The state of exception will allow collaboration between the armed forces and the police with two focuses: combat drug trafficking and migrant trafficking,” Minister of the Interior, Rodrigo Delgado explained.

Additionally, regional prosecutor Raúl Arancibia released the findings of a study on crime trends conducted by the public ministry in the Tarapacá region, which showed a 183 percent increase in homicides between 2020-2021. The spike in crime coincides with a significant surge in illegal migration in the area.

“The situation is getting worse and worse,” Arancibia said.

Chile’s Tarapacá region in the north is the epicenter of the migration crisis, which provides an easy crossing for illegals at the Chile-Bolivia border due to the extreme remoteness and a lack of patrols.

President Piñera’s declaration came after the murder of a 25 year old Chilean truck driver named Byron Castillo Herrera, who Venezuelan migrants threw from a freeway overpass after an altercation on Feb. 10. According to the prosecutor’s report, the incident happened when at least two migrants, who were walking along the side of the highway, threw rocks at Herrera’s truck and the driver stopped to confront them.

Herrera’s death triggered three days of road blockades and protests by fellow truckers and sympathizers throughout the country amid demands for solutions to the nation’s spiraling migration crisis.

Nearly 500,000 Venezuelan immigrants live in Chile, which is an astounding increase from only 5,000 eight years ago. Most of the migrants are concentrated around the Santiago metropolitan area, but many entered through the increasingly dangerous Tarapacá region.

Another violent clash occurred earlier this year on Jan. 26, when four Venezuelan migrants attacked and hit a police officer in the face after being asked to show identification on the waterfront in the city of Iquique.

Earlier in January, criminals kidnapped and murdered a 67 year old merchant from Iquique after demanding a ransom be brought to the Bolivian side of the border near Colchane, Chile.

Socialist president elect Gabrial Boric condemned the incident against the police, calling it “unacceptable” and claimed the migrant issue needs to be a “security priority” in the country.

In response to the death of Herrera, Piñera’s government also announced the militarization of four provinces in the Antofagasta and Arica regions on Feb. 12 to help combat the surge in illegal immigration.

Conflicts between migrants and residents since September 2021 have fueled rising anti-immigration sentiment throughout the country, which has become a battle cry in the northern cities.

During a protest in Iquique on Jan. 30, over 4,000 demonstrators marched through the city brandishing signs with slogans saying “Close borders now” and “Stop victimizing criminals.”

“The crime in our city is outrageous now. There are tent camps everywhere,” Iquique resident Agustin Soto told The Epoch Times.

Soto says the city’s beautiful beaches are being turned into migrant camps and there are parts of the city he won’t let his wife or daughters travel alone, like the area around Plaza Brazil, due to an excess of Venezuelan migrants who are known to occasionally harass locals.

Minister Delgado directly accused Bolivian officials of a lack of collaboration on border security on Feb. 2, saying, “Bolivian authorities do not seem to be interested [in working together], there is a lot of apathy regarding this.”

Further, Delgado said he believed police on the Bolivian side were helping coyotes, a common term used to describe human traffickers, in their efforts to smuggle migrants across the border into Chile.