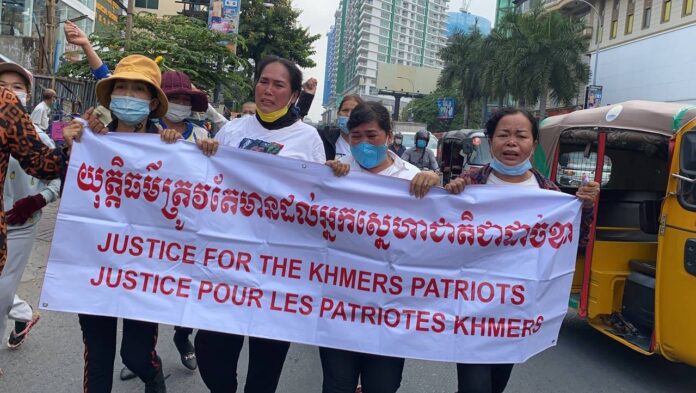 A Phnom Penh court on Thursday convicted 20 members of the banned-opposition Cambodia National Rescue Party (CNRP) of incitement and conspiracy after a mass trial that rights organizations said was politically motivated.

The defendants, seven of whom are living in exile, received sentences between five and 10 years in prison.

Cambodia’s Supreme Court banned the party in November 2017 for its supposed role in an alleged plot to overthrow the government, controlled by Prime Minister Hun Sen and his ruling Cambodian People’s Party (CPP).

The move to dissolve the CNRP marked the beginning of a wider crackdown by Hun Sen on the political opposition, NGOs and independent media outlets that paved the way for the CPP to win all 125 seats in the country’s July 2018 general election.

Since then, the government has brutally cracked down on former CNRP members, causing many to flee the country. Cambodia canceled many of their passports and barred them from returning.

Prosecutors argued during the trial that the defendants were part of a “secret network” that wanted to seize control of the government, citing as evidence an alleged CNRP plot for its exiled leaders to return to the country.

Additionally, government prosecutors blamed the opposition for the European Union’s 2020 to revoke an exemption from certain tariffs and restrictions for exports to EU-member countries.

In truth, the EU Commission made that decision because of the Cambodian government’s poor civil and political rights record.

“I am not interested and did not pay attention … to the verdict,” he said. “This verdict was not meant to serve the people with justice.”

Both Eng Chhai Eang and Mu Sochua have said they wanted to return to Cambodia to appear in court.

“Please revalidate our passports so we can go to Cambodia and serve our prison terms,” Mu Sochua, who lives in California, told RFA. “I want to end this case. I will stay in prison to end the case.”

The defense lawyer in the case, Sam Sokong, told RFA he would appeal the convictions.

Outside the court, four people were injured during clashes between CNRP supporters and authorities.

RFA attempted to contact the court spokesperson Y Rin, but he could not be reached for comment.

Rights groups condemned the verdict, saying that it was unfair to convict the accused without their participation in the trial.

“There were so many loopholes, including that the defendants were stopped from participating,” Ny Sokha, director of the Cambodian Human Rights and Development Association, told RFA. “It is not a surprise. This is a politically motivated case since the beginning.”

Cambodian American rights advocate Theary Seng was outside the court Thursday with the wives of the CNRP members on trial as the verdict was read. She told RFA that the cries and suffering of their families was “heartbreaking.”

“We are living under a dictatorship who sees the people as the enemy and thus uses violence to suppress them,” she said, adding that the verdict drew similarities to the Khmer Rouge era, referring to the brutal 1975-1979 reign of Pol Pot.

“Since Cambodia has a system of democracy, we should never see such mass trials like this. Justice requires court to try [each defendant] individually so that an accused person can have an opportunity to explain and testify for himself and herself to the court,” she said.

Charles Santiago, the chair of the ASEAN Parliamentarians for Human Rights, a group of former lawmakers that promotes democracy in Southeast Asian countries, called the verdict baseless in a statement.

The trial was “the latest example of the complete erosion of democracy and pluralism in Cambodia under the iron fist of Prime Minister Hun Sen, and further evidence that he will do whatever is in his power to remove all forms of opposition to his rule,” Santiago said.

“Hun Sen and his political party, which currently holds all 125 National Assembly seats, have used Cambodia’s courts to pursue their agenda of maintaining complete control of a country where no dissenting voices are allowed,” he said.

Santiago said that the silence of members of the Association of Southeast Asian Nations (ASEAN), which is chaired by Hun Sen, weakened the credibility of the regional bloc.

New York-based Human Rights Watch (HRW) said the trial was part of a witch hunt that discredited Cambodia and its courts.

“Foreign governments, the United Nations, and donors should call out this attack on the political opposition and Cambodia’s remaining vestiges of democracy,” Phil Robertson, HRW’s deputy Asia director said in a statement.

“Cambodia’s politicized courts have facilitated Prime Minister Hun Sen’s effort to destroy the last remnants of democratic freedoms and civil and political rights in the country. … Concerned governments should do all they can to reverse this assault on the Cambodian people.”

Translated by Samean Yun and Sum Sokry. Written in English by Eugene Whong.