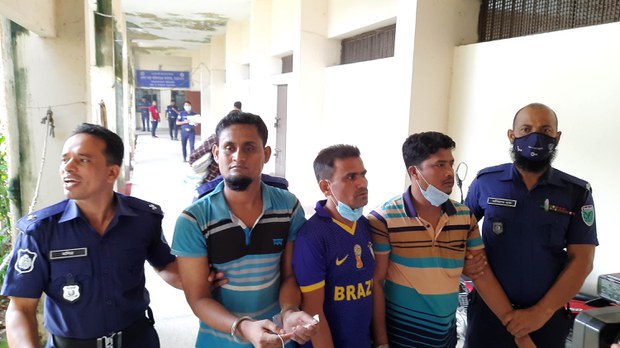 Four of 15 people arrested by Bangladesh police in recent months on suspicion of ties to the murder of Rohingya leader Muhib Ullah have confessed to the crime and say they belong to the ARSA insurgent group, police told BenarNews on Wednesday.

However, Home Minister Asaduzzaman Khan Kamal and the police are continuing to insist that the Arakan Rohingya Salvation Army has no presence on Bangladeshi soil although, in mid-January, local authorities arrested the brother of the rebel group’s leader from a refugee camp in Cox’s Bazar. The brother is not among the 15 suspects in the Muhib Ullah case.

“This case [of Muhib Ullah’s killing] has been under investigation. Thus far, we have arrested 15 suspected people in this connection. Four of them have given confessional statements [with regard to the murder] at the court,” Gazi Salahuddin, the officer-in-charge of the Ukhia police station, told BenarNews, an RFA-affiliated online news service.

ARSA is a Rohingya insurgent group whose 2017 attack on government outposts in Myanmar’s Rakhine state led to a brutal military crackdown against the stateless Rohingya Muslim minority, causing about 740,000 of them to flee to neighboring Bangladesh.

Unidentified gunman burst in and fatally shot Muhib Ullah, a refugee and internationally known Rohingya activist, in his office at the Kutupalong camp in Cox’s Bazar on the night of Sept. 29, 2021.

Salahuddin, the local police official, said he believed that ARSA leader Ata Ullah Abu Ammar Jununi may have ordered Muhib Ullah’s killing, but he said police had no evidence to prove the existence of the insurgent group in the refugee camps.

“Actually they [some arrested people] claim to be ARSA members. But we have not got anything that substantiates the claim,” he said.

ARSA is also blamed for criminal activities at the Rohingya camps in Ukhia and Teknaf, two upazilas (sub-districts) of Cox’s Bazar, a southeastern district near the border with Rakhine state in Myanmar.

When asked to comment Wednesday about the Muhib Ullah case, the home minister again denied that ARSA has a foothold in Bangladesh. But, he conceded, operatives from the rebel group have crossed the Bangladesh-Myanmar frontier back and forth.

“We have no sympathy for, or link with, ARSA. ARSA originated in Myanmar and sometimes some of their members infiltrate into Bangladesh territory to commit a robbery and go back,” Khan told BenarNews.

“Whenever we get intelligence, our law enforcement agencies catch them. But there are no organized camps or presence of ARSA on Bangladesh soil, and we will never allow them.”

However, security analyst Mohammad Ali Shikder told BenarNews that the presence of ARSA at the Rohingya camps was not “unusual.”

“The family members of Muhib Ullah alleged ARSA killed him. Again, four arrested persons confessed at the court that they are ARSA members,” the retired Army major general told BenarNews.

“So, the government must take the issue seriously as Bangladesh maintained zero tolerance for terrorism of all forms and manifestations.”