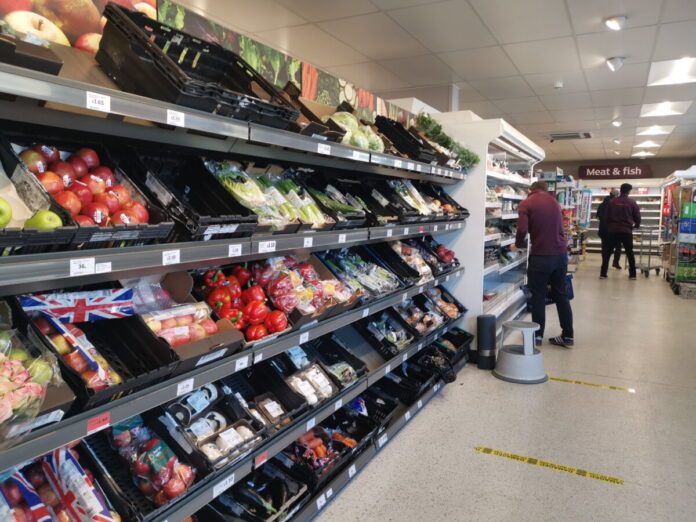 U.S. retail sales rose 0.3 percent in February, but at a slower pace than expected, as inflation seemed to impact consumer spending, according to a Commerce Department report on March 16.

Economists had previously estimated that consumer spending would hit 0.4 percent, but rising gasoline and food prices have forced many households to cut back spending on goods like furniture, electronics, and appliances, which could restrain economic growth in the first quarter.

“People are spending more in these categories, but they’re not getting more value,” he said.

Retail spending was up 17.6 percent compared with the same time last year, as fears of the Omicron variant faded, said the Commerce Department.

Retail sales are mostly made up of goods and are not adjusted for inflation.

Price inflation increased by 0.8 percent in February, hitting lower-income households the worst, according to the Labor Department.

However, January spending was revised up to an increase of 4.9 percent, which is stronger than the initial estimate of 3.8 percent.

Consumers at the end of 2021 were cushioned with financial reserves of up to $1.4 trillion in savings, though the personal saving rate, currently at 6.4 percent, has fallen steadily since the pandemic.

Companies dealing with a near-record 11.3 million job openings at the end of January are boosting wages and allowing some workers to pick up extra shifts to augment their income.

Demand has been higher for goods over services, and supply has struggled to keep up, fueling inflation rates of 7.9 percent on a 12-month basis, the fastest pace in over 40 years.

The massive surge in gas prices is a prime mover of inflation; prices at the pump rose about 7 percent in February alone.

Gas station sales are up 5.3 percent in February and 36.4 percent from 2021, according to the Energy Information Administration.

The average price of gas has since surged to a record high above $4 per gallon since the start of Russia’s invasion of Ukraine on Feb. 24.

The three-week conflict has impacted food, fuel, and metals prices and is expected to put more pressure on already strained global supply chains.

Consumers are spending more on clothing as well as on sporting goods, hobbies, musical instruments, and books.

“The 31 percent year-over-year gain for clothing and accessories also fits into the reopening trend,” said Rossman, with consumers building up their wardrobes as they “return to the office and social gatherings.”

Bar and restaurant sales showed strong gains for the month; the only services category in the retail sales report.

The hospitality industry saw a 2.5 percent increase and is up 33 percent year-over-year, but health and personal care stores saw a 1.8 percent decline.

Furniture stores were down 1 percent, and motor vehicles and parts dealers rose 0.8 percent, while receipts at electronic and appliance stores dropped 0.6 percent.

Autos sales were up 0.2 percent, well below the expected 0.9 percent increase, indicating that the rapid pace at the start of the year is slowing down.

The rise likely reflected higher prices amid shortages, as motor vehicle manufacturers reported a decline in unit sales in February.

Meanwhile, online spending had pulled back sharply, with sales down 3.7 percent.

The Federal Reserve on March 16 raised its policy interest rate by 25 basis points, the first hike in more than three years, in order to combat inflation.

The Fed laid out an aggressive plan to push down borrowing costs by next year.

The move could further dampen spending by consumers and businesses.

The central bank said that Russia’s war against Ukraine was “likely to create additional upward pressure on inflation and weigh on economic activity.”