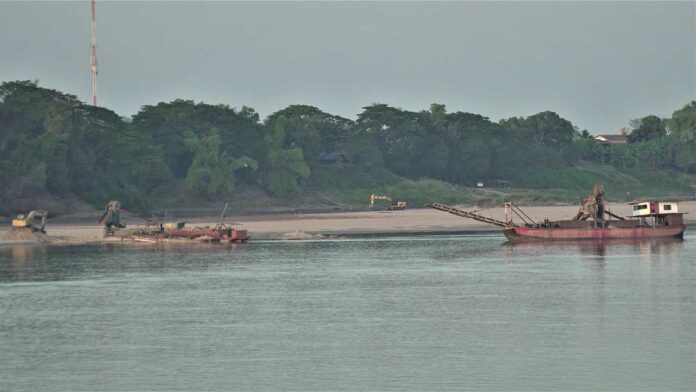 More than 100 families in the Lao capital Vientiane are calling on authorities to investigate a sand dredging company after their activities in the Ngeum River allegedly caused landslides that damaged several houses, sources in the capital told RFA.

Sand is a hot commodity in Southeast Asia, needed to support a booming construction industry. But digging it up from the bottoms of rivers can be disastrous for the environment, accelerating erosion and leading to landslides that destroy buildings near riverbanks.

The families, from Thasommor village the city’s Xaythany district, say that the company has been taking the sand without reinforcing the riverbank.

“There were some landslides near my mom’s plot of land because of the sand dredging,” a resident of the village told RFA’s Lao Service March 11. “The landslides even affected my brother’s house, which had to stop construction.”

Residents of the village petitioned the authorities to rectify the problem in the past, but they say that they received no response. They say they desperately need an embankment to protect their land and homes along the Ngeum.

Another villager told RFA that the problem with the company has been going on for years, with authorities never taking the villagers’ concerns seriously.

A third villager said that although his house is not near the river, he frequently hears complaints from other villagers about landslides caused by dredging. He said that prior to the dredging, damage to homes from landslides never happened.

“There is no embankment around here. It is a private company that does the dredging. The company may have a concession to operate like this, but I don’t know much about that,” he said.

An official from Xaythany district’s Natural Resources and Environment office told RFA that if the Thasommor residents are experiencing damaged homes due to landslides, they should ask their village chief to write a letter to the office so that authorities can investigate.

The Vientiane administrative office and Vientiane energy and mines sector have, however, not authorized any Lao company to operate a sand dredging business along the Ngeum, the official said. There is therefore no information regarding which company’s sand dredging ships are allegedly causing the problems, he said. The official added that frequent flooding in the country is the main cause of landslides.

In order to prevent landslides along the Mekong River and its tributaries, the Ministry of Natural Resources and Environment said companies with sand dredging concessions can operate only seven months per year, from December through June. When the rainy season starts, all the companies must stop their work. But some companies do not follow these instructions, RFA has confirmed.

In 2018, the Ministry of Public Work and Transport and the Ministry of Natural Resources and Environment proposed that the Lao government stop issuing dredging concessions along the Mekong and its tributaries to Lao companies.

Sand dredging is a problem in other riparian communities along the Mekong. RFA has reported on the environmental damage from dredging in Cambodia, Myanmar and Vietnam, in addition to Laos. Though the region’s governments have attempted to regulate the practice, high prices for sand fueled by high demand in places like Singapore often lead companies to ignore restrictions.