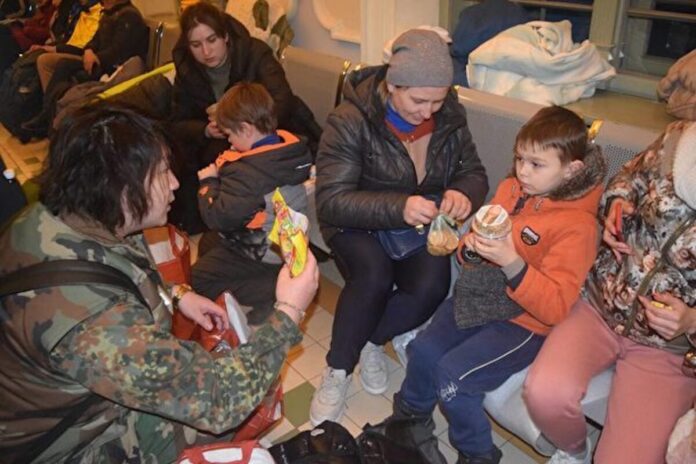 With the Russia-Ukraine war still ongoing, volunteers from more than 52 countries have joined the Ukrainian international legion.

A well-known Chinese writer and a critic of China’s ruling Chinese Communist Party told the Chinese language edition of The Epoch Times that he had applied to join the legion on March 10 and was leaving for Kyiv on March 14.

Yi Qiwei shared his experience from volunteering in the Polish town of Medyka at the Ukrainian border while waiting to leave to Kyiv to join the fight.

Yi Qiwei (a.k.a. Wu Dizhao), a descendant of a Manchu royal bannerman, published his first novel “Redemption” at the age of 14 in 2011. At the time, mainland Chinese media called him “China’s most talented young writer.” He claimed that his maternal grandfather was a high ranking Chinese communist official whose name he’s reluctant to publicize. In recent years, Yi has become a vocal critic of the communist regime. He usually resides in Japan.

Yi and his group of nine friends were traveling from the Netherlands to Germany on March 7 when they decided to buy some supplies, clothes, and food to drive them to Medyka and volunteer.

Yi said that after arriving at the border to help the refugees, he felt the reality was very different from what he imagined. It was really hard to be a volunteer.

He witnessed a lot of refugees coming from Ukraine, all who had a look of desperation on their faces. “You could see that those people were very helpless. There was no place for the children to sleep, it was super cold,” he said.

“They had no food at all and they were very helpless. Most of them can’t speak English or Polish. Many children are the same age as my daughter, which makes me sad. We provide them with food and water as much as possible.”

Yi said he also provided some financial help to some Ukrainian refugees he met, as their Ukrainian currency and cards were not accepted in Poland.

He said: “We also hope that more people will see and help them. We want to let these refugees see that there are so many people coming to help them to give them hope.”

Yi said he saw many Ukrainian refugees sleeping in train stations, McDonald’s, and other public places after crossing the Polish border. He helped some refugees stay in hotels.

Yi criticized the Chinese regime’s propaganda and its support of Russia’s war, which he said is claiming that “national interests are above everything else.”

He said that what the common people want is a good life, and a nation should protect its people—not the other way around.

“If this happened to them, they would not say such things,” Yi said of the Chinese who echo the regime’s talking points.

“There is no so-called ‘national interest.’ What the people want is very simple—to live in peace and stability. The people can only develop the country’s economy if they are alive. If you talk about those slogans with disregard of people’s lives, who would still follow you?”

Zhao Fenghua and Gu Xiaohua contributed to the report.