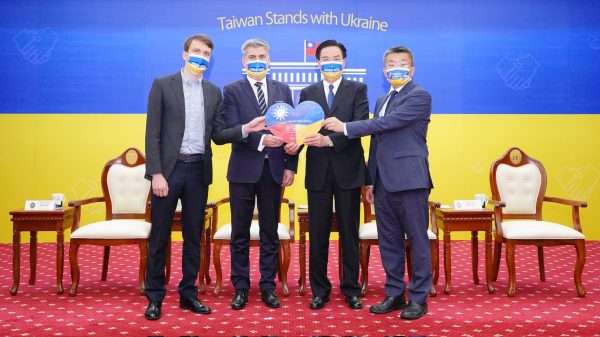 While the sky over Ukraine is covered by smoke and fire, the atmosphere in Taiwan is the exact opposite. For weeks, big crowds took the streets every night to watch fireworks and fascinating drone shows in celebration of the Lantern Festival – and Taiwan’s recent diplomatic success. Over Kaohsiung, the southern port city, more than 1,500 lighting drones displayed an unambiguous political message: a giant computer chip – Taipei’s strategic diplomatic asset – and the flags of Taiwan’s best international friends: the United States, Japan, Poland, Slovakia, Czechia, and Lithuania.

Self-ruled Taiwan, which the People’s Republic of China claims as part of its rightful territory, is portrayed as Ukraine’s Asian counterpart by Western media: a liberal democracy fighting a David-versus-Goliath struggle against a threatening, autocratic neighbor. Based on these assumptions, Taipei constructed its own war narrative. When Russia began its full-fledged invasion of Ukraine, Taiwan’s government and local scholars warned that comparing the situation in Ukraine and Taiwan is inappropriate.

But as Russia’s presumed blitzkrieg turned to a protracted war, the mood in the island has changed. Taiwanese President Tsai Ing-wen’s government strongly criticized Russian aggression against Ukraine multiple times. Taipei said it would join serious sanctions against Russia, including export restrictions on $20 million-worth of semiconductors, and moves to block Russian banks from the SWIFT international payments system. In Taiwan, the war in Ukraine is no longer seen as an armed conflict between two states, but as a struggle between liberal democracies and evil autocracies. During a recent visit by U.S. officials Tsai announced that Taiwan would join the collective effort of democracies worldwide to deter any military aggression that threatens the democratic way of life.

Solidarity among Taiwanese is also on the rise. The blue and yellow colors of the Ukrainian flag can be seen in every major city; in Taipei hundreds marched to show support for Ukraine on Sunday. The government has raised humanitarian aid worth over $20 million to help displaced Ukrainians. The humanitarian support will be provided to Poland – a host country for over 1.5 million refugees and Taiwan’s increasingly good friend in the Central and Eastern European region.

Taiwan’s Ukraine policy is the latest development of the island’s recent diplomatic offensive. In view of rising dependence on China, the Tsai-government launched the New Southbound Policy in 2016 to build stronger ties with fast-developing South Asian and Southeast Asian nations. But the strategy had its limitations. “The Southeast Asian countries are caught between great powers’ rivalry. Balancing between China and the United States is their main strategic goal,” Marc Cheng, executive director of the EU Center in Taiwan, located at National Taiwan University, told The Diplomat.

Expanding its quest to diversify international relations, Taiwan has turned to Europe, especially its partners in the Central and Eastern European region. “There are many similarities between our countries,” Cheng said. Taiwan and the CEE countries are close in geographic size and economic development, while they also share similar experiences in dealing with greater powers. Good timing was also important: Growing disillusionment over China’s 17+1 cooperation in the region and the COVID-19 pandemic paved the way for success.

Building on these arguments, Taiwan has successfully targeted the region with a charm offensive. Three out of the Visegrad Group’s four members – Poland, Czechia, and Slovakia – donated vaccines and sent high-level delegations to the island. Taiwan’s Foreign Minister Joseph Wu paid an official visit to the region in October 2021. Earlier that year, Lithuania announced the establishment of a new “Taiwanese Representative Office,” causing diplomatic turmoil. Beijing considered Lithuania to be in violation of the one China principle and posed serious sanctions accordingly. In response, the European Union initiated dispute consultation at the World Trade Organization, and Taipei established a $200 million fund for investment in Central and Eastern Europe.

The diplomatic offensive was built on a long lasting and fast-evolving EU-Taiwan relationship. Last October, the European Parliament approved its first-ever report on bilateral relations by an overwhelming majority. The rapporteur of the EP on EU-Taiwan relations, MEP Charlie Weimers, is urging the European Commission to boost political and economic ties with Taiwan, including a bilateral investment agreement between the two parties. There are likely more development to come in 2022, after Tsai addressed stronger EU-Taiwan relations in her New Year’s Day speech.

“Like-minded” is the key concept in the post-pandemic world order, and Taiwan became aware of this trend early on. The COVID-19 pandemic has proved that the world is too reliant on China for global supply chains, while the war in Ukraine showcases the dangerous dependence on Russian gas in Europe. These lessons divided the world into polarized multilateral alliances, parallel financial systems, and exclusive supply chains. The government of Taiwan would prefer to join the Western community and is planning its foreign policy accordingly. Consequently, deepening ties with the EU goes beyond vaccine diplomacy; it involves economic relations, security, and ideology.

According to the Ministry of Economic Affairs, the total value of trade between Taiwan and the European Union reached a record high last year, with an over 20 percent increase compared to 2019. Last October Tsai announced that investment from Taiwan to the EU has also reached historic high, with 4.5 billion euros in less than a year. At the same time, Europe’s accumulated foreign direct investment (FDI) in Taiwan now exceeds $49 billion, making the European Union Taiwan’s largest source of FDI.

“Security in the Taiwan Strait has an impact on EU’s economic prosperity,” Cheng-yi Lin, former deputy minister of the Mainland Affairs Council, told The Diplomat.

This was confirmed by the EU’S “Council Conclusions on an EU Strategy for cooperation in the Indo-Pacific,” adopted in 2021. While the document does not mention Taiwan directly, it emphasizes the importance of regional stability and identifies the Indo-Pacific as the new strategic focus for the EU’s foreign policy.

“Taiwan serves as reliable partner for the EU in the region. The two share common values of freedom, democracy, human rights and the rule of law,” Lin said.

The president of the European Commission, Ursula von der Leyen, initiated a “geopolitical Europe” when she was elected by the Parliament in 2019. Stronger political ties to Taiwan would contribute to this agenda, but as EU policymakers underline, there is a narrow margin for the Commission in terms of common diplomacy, especially in the case of Taiwan, despite, the fact that pro-sovereignty conservative, progressive, and liberal groups all voted in favor of the European Parliament’s first report on EU-Taiwan relations last October. Among others, the report urges the Commission to sign a bilateral investment agreement (BIA) and acknowledge Taiwan as a major partner in the Indo-Pacific region.

Senior EU officials who spoke with The Diplomat said the document is more important symbolically for Taiwan, as it strengthens Taiwan’s sovereignty and legitimacy. The official added, however, that the Commission is reluctant to follow the recommendations of the report, mainly due to fear of China’s reaction. The BIA is the most sensitive point, as an investment agreement could be seen as a move toward recognizing Taiwan as an independent country, which is a major red line for China.

China has its say on the issue. The 2022 EU-China Summit is scheduled for April 1, with the intention to calm the recently escalating trade and geopolitical tensions between the two. But as Song Luzheng, a researcher at Fudan China Institute underlines, the EU tends to see China from a geopolitical point of view that poisons the relationship. “It is normal to diversify economic relations,” Song argued, “but it is not normal to add the ‘like-minded condition’ to it.” Song says a focus on ideology in trade relations is not just against China’s interests but challenges the WTO’s main principles: inclusiveness and equal treatment.

“Unlike the West and Russia, which often use force, China has always relied on diplomacy and economic relations to deal with conflicts,” he continued. Song argued that this is the case with Taiwan as well: “Of course, if the EU does not break through the bottom line of the one-China principle, Beijing will not oppose it.”

But for the EU, the Taiwan issue is not just an economic matter, and China cannot accept the development of government relations with Taiwan and diplomatic breakthroughs under the political slogan of “like-minded.”

“As the Ukraine crisis shows, the nature of great power rivalry is changing. Russia, Europe, and the United States confront each other, while China stays out of it. No matter which side wants China to be involved, Beijing will ask for the price,” Song continued.

Consequently, Beijing is not worried. “China has plans with the 16+1 Cooperation and looking forward for the EU-China Summit,” he said.