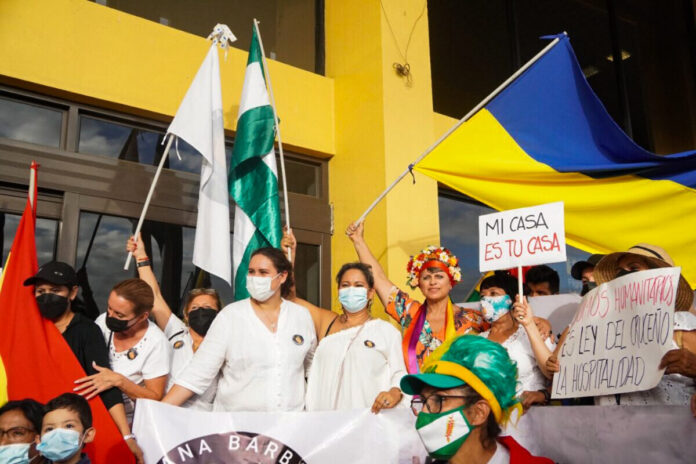 SANTA CRUZ, Bolivia—Near the exit door of immigration at the Viru Viru International Airport, a crowd of Bolivian and Ukrainian supporters gathered during a March 13 demonstration to celebrate the arrival of two refugees deported the day prior by immigration officials.

Ukrainian citizens Mykhailo and Oksana Karpenko arrived at the same port on March 12 and Bolivian immigration authorities detained the couple for roughly 15 hours, despite having the correct paperwork, including a formal letter of invitation from a Ukrainian expatriate and Bolivian citizen who’s lived in the country for 45 years.

After the lengthy detention, officials denied the refugee couple entry and deported them to Argentina.

The couple’s host in Bolivia, Ludmila Kundenko, told The Epoch Times the Ukrainian consulates in Brazil and Argentina were also involved in the effort to return her displaced countrymen.

“The most important thing right now is their lives. They [the refugees] are my countrymen, the children of my brothers,” she said.

Kundenko is no stranger to flight from persecution. In 1976, she arrived in Bolivia as the first refugee to flee the Soviet Union and seek asylum in the South American nation.

Since then, she created what she called a “beautiful life” for herself in Bolivia in the Amazonian department of Santa Cruz.

In the spirit of paying it forward, she offered to help others seeking refuge from Russia’s war in Ukraine.

“I opened a door for more Ukrainians and Russians to come here. It’s wasn’t just people from Ukraine [fleeing the Soviet Union],” she added while waving a colorful banner displaying the colors of the Ukrainian flag.

Since Russia launched a full-scale military invasion of Ukraine on Feb. 24, Bolivia has maintained a neutral stance on the conflict.

Representatives from the country abstained on the United Nations General Assembly votes to reprimand Russia for the ongoing bombardment and also the establishment of an official human rights council inquiry.

Bolivian officials haven’t outwardly spoken in favor or against the actions of Russian President Vladimir Putin since the onset of the war with Ukraine.

However, officials from socialist President Luis Arce’s administration moved quickly after the immigration debacle on March 12 and invited the deported refugees to return from Argentina on a government-paid airline ticket, along with issuing a formal apology.

During a press conference held at Viru Viru airport on March 13, the general director of immigration Katherine Calderon formally welcomed the young couple back to Bolivia.

“The [regional] director of immigration in Santa Cruz and three other employees involved [with the deportation] were already fired because it was against the law. The national government doesn’t support their actions,” Calderon told reporters when asked why officials sequestered the refugees.

Furthermore, the director said the couple has been granted refugee status for “as long as they want.”

She also invited Ukrainian citizens from all over the world to come to Bolivia, claiming they will be granted immediate refugee status, going forward.

After the press conference, Ukrainian refugee Oksana Karpenko told The Epoch Times, “We’re so grateful to be here.”

When asked if they thought others would also flee the conflict in Europe and seek asylum in Bolivia, Mykhailo Karpenko said, “I doubt it. It’s very expensive to come here.”

The Karpenkos declined to elaborate after being questioned about what happened during the initial 15-hour session with immigration authorities on March 12.

This was a point of concern for human rights groups and supporters of both nationalities outside the terminal since Bolivia has a history of illegal detention and solicitation of bribes both from immigration authorities and police officers.

“It isn’t the first time they’ve done this,” one of the crowd supporters who asked to be called Juan said about Bolivian government officials.

Law 251 pertains to the handling of displaced people from other nations and has existed on the books in Bolivia since 2012. It states the government must grant asylum regardless of country, race, religion, or monetary disposition, if asked.

Though Juan noted historically, the Bolivian government has granted refugee status to criminals and terrorists, who enter at the discretion and convenience of the socialist government.

“So why not people fleeing a war?” he asked rhetorically.

“I’m glad those [immigration] officials were fired. Bolivia could be punished by international organizations for this offense,” he said regarding the deportation of the Ukrainian couple.

Bolivian lawyer Luis Flores echoed this sentiment, explaining to The Epoch Times, “It wasn’t legal, what they did [immigration officials]. The Ukrainians had to be granted refugee status when they arrived, simple at that. It’s the law.”

It Takes A Village

Consuelo Medina is a member of the Bolivian human rights group Ana Barba. She stood outside immigration in the terminal with other members of the organization for more than two hours before the refugee couple arrived, brandishing a sign that read “my home is your home.”

Medina told The Epoch Times, “I don’t agree with the war. I’m here as a Bolivian citizen to support the people of Ukraine.”

A band played music and the crowd of supporters cheered as the Karpenkos finally exited airport security on March 13.

Kundenko embraced them while wearing a traditional Ukrainian style floral crown, which has become a symbol of national pride.

“It’s a celebration for Ukraine and for Bolivia,” Kundenko said.

She added that were it not for the overwhelming demand for clemency by the Bolivian people and pressure from multiple Ukraine consulates, the refugee couple would likely still be stuck in Argentina.

Clutching a bouquet of flowers one Bolivian supporter handed her outside immigration, Oksana Karpenko said, “It feels so good to be here.”