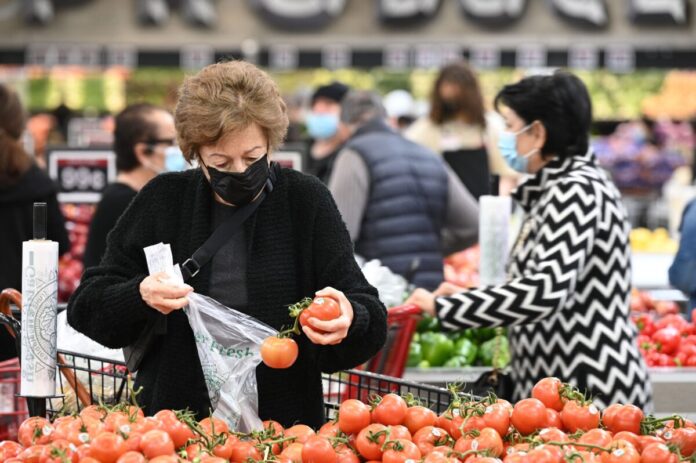 The Russia-Ukraine conflict could push U.S. inflation into double-digit territory, according to Allianz chief economic adviser Mohamed El-Erian, who cited the disruptive impact of the war on supply chains, shipping, and commodity prices.

El-Erian, who also serves as president of Queens’ College, Cambridge, told CBS’ “Face the Nation” in a recent interview that he believes there’s more upside for inflation in the United States before it peaks around summertime.

“I estimate that at 7.9 percent, we will probably get very close or above 10 percent before we come down,” El-Erian said. “That difference will be all because of the disruption that Putin’s war implied for commodity prices, supply chains and shipments.”

Inflation in the United States rose at a blistering pace of 7.9 percent in the year through February—the fastest pace in 40 years—data released last week by the Bureau of Labor Statistics showed.

Prior to Russia’s invasion of Ukraine, Treasury Secretary Janet Yellen projected inflation would ease in the second half of 2022. She’s since revised her prediction, citing the impacts of the war.

“It is exacerbating it,” she said of the Russia–Ukraine conflict, in remarks last week on CNBC’s “Closing Bell.” “I think there’s no doubt about it. We’ve seen a very meaningful increase in gas prices and my guess is that next month, we’ll see a further evidence of an impact on U.S. inflation of Putin’s war on Ukraine.”

Yellen now believes that economic uncertainty driven by the Russia–Ukraine war means Americans should brace for inflation to remain “uncomfortably high” throughout the year.

What the Kremlin calls a “special military operation” to “demilitarize and denazify” Ukraine has prompted Western nations to impose punishing sanctions on Russia, while a bevy of major brands have cut their business ties with Moscow.

Oil prices spiked to around $130 per barrel in the wake of the invasion, though they’ve since fallen to around $100 per barrel. Prices of key minerals, fertilizer, and food products like wheat, have also surged. The price of urea, a key nitrogen fertilizer, has more than tripled over the past 12 months.

Ukrainian ports have been unable to export grain since the outbreak of hostilities, while the sanctions on Moscow are leading food traders to avoiding purchases from Russia, pushing up prices.

The United Nations recently warned that the Russia-Ukraine conflict could push international food and feed prices up by as much as 22 percent.

Russia and Ukraine together account for 19 percent of the world’s barley supply and 14 percent of its wheat. Russia is also a leading exporter of fertilizer.

Inflation and the economic impacts of the Russia-Ukraine conflict are sure to be front-of-mind for Federal Reserve policymakers as they meet Tuesday for a two-day session that markets expect will bring the first interest rate hike since 2019.

“All signs point to a quarter-point interest rate hike from the Federal Reserve when their meeting concludes Wednesday,” Bankrate Chief Financial Analyst Greg McBride told The Epoch Times in an emailed statement.

“The questions revolve around how many more are to come and how quickly. The war in Eastern Europe gives the Fed reason to act more cautiously, but they will still be working to corral what is already the highest inflation in 40 years,” he added.

While the Fed’s tightening of monetary conditions will have a cooling effect on demand and so on inflation, rate hikes will do nothing to address supply-side logjams or factors like import bans on Russian energy.

“Spiking oil prices will add further to inflation pressures, but that isn’t the type of demand-driven inflation the Fed can fix,” McBride said.

“Rising oil prices will siphon more money from consumers’ pocketbooks and slow the economy, having the same effects as an interest rate hike but more immediate,” he added.

Inflationary expectations have risen among Americans, who upped their outlook for where inflation will be a year from now and in three years time, according to a survey released on Monday by the New York Federal Reserve.

U.S. consumers expect 6.0 percent inflation a year from now and 3.8 percent three years from now, and they expect to spend substantially more on food, gas, and rent in the next 12 months.

Wholesale prices, meanwhile, which reflect costs incurred by businesses that are likely to get passed along to end users in the form of consumer price inflation, jumped in February at their fastest over-the-month pace on record while matching January’s record for the highest over-the-year pace.

The Producer Price Index (PPI) rose in February by a monthly 2.4 percent and an annual 10 percent, according to the Bureau of Labor Statistics.