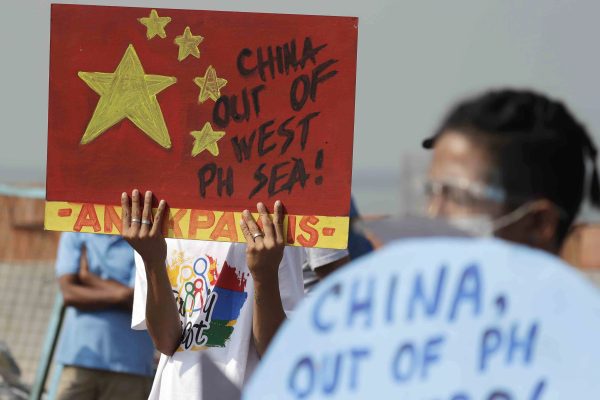 According to conventional thinking, foreign policy is a marginal concern during elections. As James Carville, a key figure in Bill Clinton’s successful 1992 U.S. presidential campaign, memorably put it, “It’s the economy, stupid.” Despite his numerous foreign policy successes, most notably the liberation of Kuwait during the 1991 Gulf War, incumbent President George H. W. Bush was trounced by Clinton’s bread-and-butter campaign.

In the Philippines, a besieged democracy where a majority live on the edges of poverty, one would expect foreign policy to be a non-issue during elections. After all, surveys consistently show that gut issues – inflation and employment — remain as the top priority of average voters.

Upon closer examination, however, it’s clear that foreign policy concerns, particularly China’s encroachment into Philippine waters, are a hot button issue not only now during elections, but will be fore years to come. Whoever becomes the next Filipino president will have to contend with profound structural factors which will shape Philippine foreign policy for the foreseeable future.

In particular, the South China Sea disputes are highly resonant precisely because of their centrality to Philippine food security and territorial integrity, deep-seated anti-China sentiments among vast majority of Filipinos, and the resilience of institutional linkages with traditional allies, namely the United States.

Last month something remarkable happened in the Philippines. Candidates, including the outsized frontrunner, Ferdinand Marcos Jr., spent almost two hours discussing the most pressing international security issues, including the Quadrilateral Security Dialogue (Quad), during a presidential debate. (I couldn’t help raising this amusing fact during exchanges with Quad foreign ministers at the Munich Security Conference.)

The candidates faced tough questioning by a panel of experts, with prominent academic Clarita Carlos almost schooling the presidential contenders on the nuances of foreign policy. The highlight of the debate, however, was Marcos’ bolt-from-the-blue hawkishness on China when asked about the South China Sea disputes. Seemingly drenched in patriotic flourish, the former senator promised to deploy Philippine warships to “defend” the country’s fishermen as well as sovereign rights in the South China Sea.

The ex-dictator’s son maintained that “putting military presence” in the area is crucial to “show China that we are defending what we consider our territorial waters.” By all accounts, this marked a major departure from Marcos’ generally quiescent, if not defeatist, stance on China. It also represented a significant shift from the policy of the incumbent President Rodrigo Duterte, who has tirelessly pursued cordial ties with Beijing, his ultimate strategic patron. As Marcos put it months earlier, the incumbent’s “policy of engagement… is the right way to go. Because whatever we do, we can’t go to war… Certainly, we don’t want to go to war with China.”

So what explains the sea-change in rhetoric, if not policy orientation, of the leading candidate to replace Duterte?

Let’s be clear: No one in their right mind would take Marcos Jr.’s words at face value. After all, the ex-dictator’s son is notorious for “alternative facts,” including the surreal claim that the Philippines was en route to becoming a giant Singapore had his singularly corrupt father not been deposed during the 1986 “People Power” revolution. Marcos also continues to insist that he graduated from the University of Oxford contrary to all evidence, including a public announcement by the august university’s administration.

Among the presidential candidates, Vice President Leonor “Leni” Robredo and boxer-turned-senator Emmanuel “Manny” Pacquiao have advocated for a tougher stance against China through reassertion of the Philippines’ arbitral tribunal award at The Hague as well as revitalized defense relations with traditional allies such as the United States. More centrist candidates such as Manila Mayor Francisco “Isko” Moreno and Senator Panfilo Lacson have tried to square the circle by welcoming joint exploration agreements with China in the disputed areas while emphasizing military modernization as well as the Philippines’ treaty alliance with the U.S.

Notwithstanding the radically divergent positions of different candidates, three structural elements will shape and constrain the strategic options of the next Filipino president.

First, China is deeply unpopular in the Philippines. China’s net trust rating among Filipinos was only positive in nine out of 53 total surveys conducted over the past two decades, according to the Social Weather Stations (SWS) polling agency. In 2019, China’s net trust rating reached -33 percent, a pitiful number compared to the United States’ (+72 percent) extremely high trust rating throughout the years.

China’s expanding footprint across Philippine waters has clearly been a major driver of anti-Beijing sentiment among Filipinos. Ordinary Filipinos are particularly moved by reports and images of marooned Filipino fishermen facing constant harassment by Chinese coast guard and fishing vessels.

Second, the South China Sea issues are increasingly a gut issue to majority of Filipinos, who have realized the importance of the contested waters for the Philippines’ economic wellbeing and food security. China has prevented the Philippines from exploring and exploiting untold amount of fisheries and energy resources in the area, including the hotly contested Reed Bank.

What also alienated many Filipinos is what can be best described as Beijing’s “pledge trap,”  namely largely unfulfilled promises of large-scale infrastructure investments made in exchange for Duterte’s geopolitical acquiescence (I have been warning about this phenomenon since 2018).

Finally, the next Filipino president will have to also contend with a powerful defense establishment and strategic elite, which is committed to robust defense relations with the United States and remains deeply skeptical of China’s intentions in the region. As I have argued throughout the years, Duterte hasn’t been able to colonize the Armed Forces of the Philippines (AFP), which has consistently emphasized its commitment to defend the country’s sovereign rights and territorial integrity.

This largely explains why six years into Duterte’s term, the AFP hasn’t, among others, signed a single major defense deal with China. If anything, the AFP has actually expanded defense ties with the U.S., while rapidly improving its external defense capabilities.

Back in 2018, I and colleagues at the National Defense College of the Philippines conducted a preliminary survey among next-generation commanders in the Philippine military. We found out that majority of respondents value bilateral defense ties with the United States; while welcoming engagement with Beijing, they continue to view the Asian powerhouse as a primary external security concern.

Thanks to the abovementioned reasons, whoever becomes the next Filipino president will come under growing pressure to assert the country’s sovereign rights in the South China Sea, maintain robust defense ties with the West, and, accordingly, approach bilateral relations with China with greater strategic finesse and maturity than the incumbent.