Cargo Ship Stuck in 24 Feet of Water in Chesapeake Bay 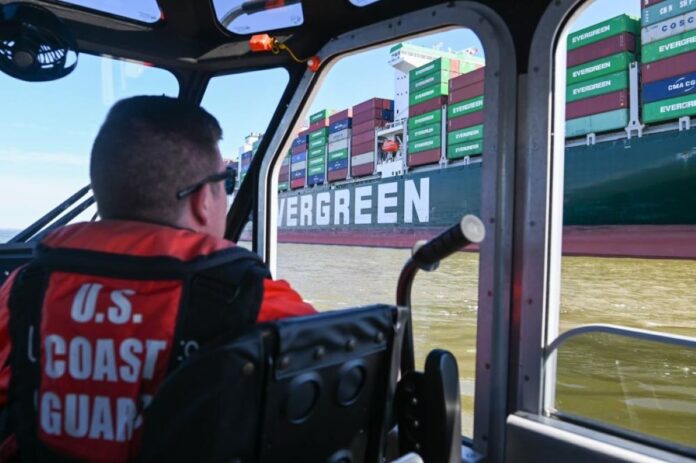 A fully loaded cargo ship is still stuck in the Chesapeake Bay.

“On Sunday March 13, at approximately 9 p.m., we received a call from the vessel, the Ever Forward, stating that they had run aground,” Coast Guard Public Affairs Specialist Petty Officer 3rd Class Breanna Centeno, told The Epoch Times. “We do not know the reasoning as to how it happened, however once the vessel is refloated, we are going to do an investigation to figure out possible causes.”

It was leaving Baltimore, Maryland, and headed to Norfolk, Virginia. The vessel is carrying general dry cargo and although the Coast Guard does not know exactly what is in the containers, it was able to confirm the cargo is not made up of hazardous materials.

The plan to move the ship is not defined yet. The Coast Guard and the Maryland Department of the Environment are in the process of putting together a refloat plan, Centeno said.

The Coast Guard issued a Captain of the Port order directing the vessel’s crew to conduct a sounding every four hours to check the levels of liquids in any tanks and bilges to guard against leaks or breaches. This practice is a safety measure. There are no reports of leaks as of Tuesday afternoon.

“As of right now, there are no reported injuries or pollution reported due to the grounding,” Centeno said, adding that other ships can still get through the area. “The vessel is aground outside of the channel so there’s no hazard to navigation.”

The Ever Forward is 1,095 feet long. Its home port is in Hong Kong.

Evergreen Marine Corp. is based in Taipei City, Taiwan. It owns more than 150 container ships, including the Ever Given, which got stuck in March 2021 in the Suez Canal for six days.

The company sent The Epoch Times the following statement.

“At 20:40 on March 13, EDT, Ever Forward, a 12,000 TEU ( Twenty Equipment Unit) container ship deployed on Evergreen Line’s Asia-US East Coast. Service ran aground when departing the Port of Baltimore. The incident has not caused a fuel leakage. Evergreen is arranging for divers to conduct underwater inspections to confirm any damage to the vessel, and is coordinating with all the concerned parties to refloat the ship as soon as possible. The incident did not block the navigation channel or disrupt traffic entering or leaving the port. The cause of the incident is under investigation by the competent authority.”

On March 7, the company issued a statement about how it is navigating the conflict in Ukraine.

“Due to the recent developments in Ukraine and Russia, we regret to inform that our operations in the area are disrupted and our ability to complete the carriage of consignments to some destinations is, or is likely to become, obstructed,” the company said in a statement.

The company, at that time, was evaluating solutions for cargo that was on the water.