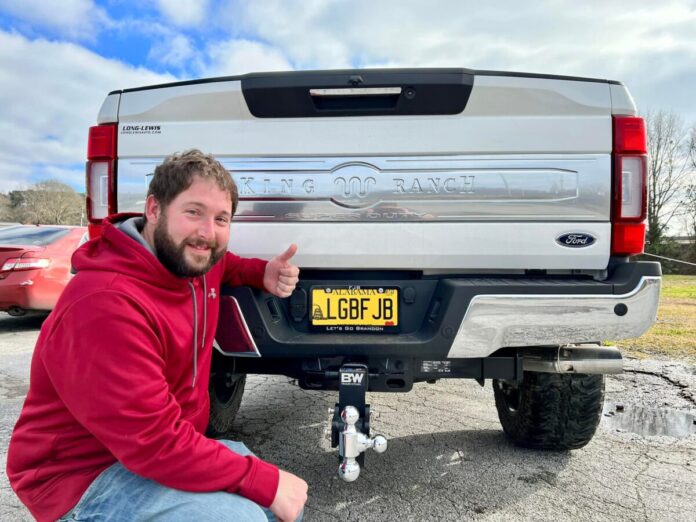 PUNTA GORDA, Fla.—An Alabama man who personalized his license plate with “LGBFJB” on a state-issued “Don’t Tread on Me” yellow license plate that the state found “objectionable” now says he can keep it.

Nathan Kirk, Blount County resident and owner of Blount County Tactical, a store that sells firearms and ammunition, received a letter from the Alabama Department of Revenue dated March 9 stating that the license plate would “not be recalled.”

“The state had telephoned me [on March 11] and told me that they would not be recalling the plate and that a letter would be forthcoming,” Kirk told The Epoch Times in a telephone interview. “I wanted to make sure and verify with that letter that it was real.”

Kirk believes the amount of attention his story garnered was the reason behind the state changing its mind.

“Jefferson County Sheriff David Clarke tagged the governor [Kay Ivey] about what was happening to me,” he said. “Then, before you know it, I was getting a telephone call and now a letter. I don’t think they wanted the backlash.”

Kirk said his advice to anyone who is getting “bullied” by government officials is to “not lay down.”

“Unless it’s something bad or vulgar in expressing your opinion, it’s nobody’s right to tell you you can’t do something,” he said. “America in general needs to start standing up.”

Kirk said that he is meeting with legal counsel soon to discuss his options and said that litigation is not off the table.

“I will listen to what they have to say,” he said. “As long as they don’t mess with me any longer—it shouldn’t have ever happened and my main thing was shutting it down, and I’ve accomplished that.”

In October Kirk received his new Ford truck that he had ordered a couple of months prior. He registered the vehicle in his wife’s name and ordered a specialty plate, sometimes called a “vanity plate,” displaying in bold black letters “LGBFJB” against a yellow background with the Gadsden coiled snake logo for his new silver Ford F-150 King Ranch pick-up truck from the Alabama Department of Revenue, Motor Vehicle Division.

“I wanted to do something ‘goofy’ with the tag,” Kirk told The Epoch Times in a telephone interview. “Being in the firearm industry and knowing how [President Joe] Biden feels about firearms, yeah, it’s derogatory against Joe Biden, I’ll admit that.”

Kirk said in Alabama tags “normally” arrive within two weeks of ordering them, but “not this one.”

“The paper tag that I had on the truck was expired and I called the tag office and they told me that there was an aluminum shortage at the courthouse where I ordered the tag—that was news to me because everyone was still drinking out of aluminum cans,” he continued.

On Jan. 21, Kirk said he received his tag in the mail, put it on his truck, took a picture of it, and posted it on his Facebook account.

Then on Feb. 25 he received a letter telling him that the tag was “inappropriate and “objectionable.”

“That doesn’t sound right to me,” he said of the letter. “I thought somebody had seen it and then reported it, but that turned out not to be the case.”

He said he received a telephone call “a few days” after receiving the letter and told him the “exact reason” why they found Kirk’s tag to be “objectionable.”

“They told me they have ‘reviewers from the review department’—that’s the exact terminology they used,” he said. “The reviewer said they thought the “F” meant the explicative word.”

But Kirk said the letter “F” that has “everyone’s feather’s ruffled” doesn’t stand for that, it stands for the word “forget.”

Kirk said he issued a challenge to the department by telling them he would surrender his tag if they “revoked every single license plate in the state of Alabama that has the letter ‘F’ in it.”

“They said they’re not going to do that,” he laughed. “Then I said you’re probably not going to get mine either.”

Kirk said while researching license plates throughout the state he came upon something “very interesting.”

“I found out just a year ago, the state was issuing tags for the Freemasons, the Masonic Lodge, and you’ll never guess what the first three letters were on the tag—FJB 001, FJB 002 and the numbers go up from there,” he said. “But my “F” tapping is offensive?”

Florida attorney Charles Heekin said that if the state of Alabama had carried through with its plan of revoking Kirk’s license plate he had a “good case” against the state.

The anthem of “Let’s go Brandon” reportedly has cemented itself into the vernacular of American citizens who do not particularly care for the sitting president originated from a cheer that broke out at Alabama’s Talladega Speedway in May 2021 when a reporter mistook the crowd’s cheers of “[expletive] Joe Biden” for a cheer of “Let’s Go, Brandon,” referring to the NASCAR driver she was interviewing, Brandon Brown, after he won the race.

The phrase subsequently caught on like wildfire on social media, with numerous public figures, from rappers to politicians, using the term, including Sen. Ted Cruz (R-Texas) and Florida Gov. Ron DeSantis, who signed legislation ending mask and vaccine mandates in Brandon, Florida.

First amendment rights and expressing oneself came at a price for Kirk and his family, however, as they, and even their pets, have received death threats because of his gun store and now his license plate dispute with the state.

He said that he gets calls from “private numbers” saying “awful things” about his wife and her salon business.

He said he does not think that it is anyone local, he believes it is someone who has seen the story on “other media outlets” and has gone to great lengths to obtain his and his wife’s cell numbers, and the calls are “relentless.”

He said that people will call and say derogatory things about his wife, and his children were singled out by telling him they were “going to find them and slap them.”

“They called my wife and said the same things,” he said. “They even said I wasted my money on a car tag when I could’ve gotten my wife a facelift and a boob job.”

“It can’t be anyone from around here,” he said about his hometown. “They’re not the same breed of people. I would never do anything like that to someone no matter their political views—it’s just a smear campaign and they tried the cancel culture thing and failed.”

Kirk has also had an issue with Facebook canceling his page in an attempt to “silence his opinions” and “hurt his firearm business.”

“I have had four profiles that I’ve had to make because of my affiliation with a firearm store,” he said. “They will either take them down or say I am violating their community standards.”

Kirk said he has lost his Facebook pages due to advertising sales that he has in his store and that Facebook is violating its advertising policies on the Marketplace site located within the Facebook domain.

“They said that a brick-and-mortar firearms store can post things for sale at your store,” he said. “But they cancel it anyway—and they have moved my feed to where nobody can see it—I’m basically irrelevant.

Kirk said his personal Facebook page has been banned because of comments he posted during the pandemic involving vaccines.

“I got banned from Facebook for 30 days because I called a woman a liberal, but she wished death on me and my family—even my dogs—and she gets to keep her page,” he said.

Kirk is now seeking the advice of a constitutional attorney to not only take on the state of Alabama over his license plate, but Facebook as well.

“I want Mark Zuckerberg to know who I am,” he said.

According to the department’s website, In Alabama, “every motor vehicle operator who operates a motor vehicle upon any city street or other public highway of or in this state shall at all times keep attached and plainly visible on the rear end of such motor vehicle a license tag or license plate as prescribed and furnished by the Department of Revenue at the time the owner or operator purchases his license.”

“Anyone violating the provisions of this section shall be guilty of a misdemeanor and shall, upon conviction, be punished by fine not exceeding $500.00 and, in addition thereto, shall be prohibited from driving a motor vehicle in Alabama for a period of not less than 60 days nor more than six months,” the website says.

The Alabama Department of Revenue responded via email to The Epoch Times that the “matter is now closed.”

Jannis Falkenstern is an Epoch Times reporter who covers the state of Florida.