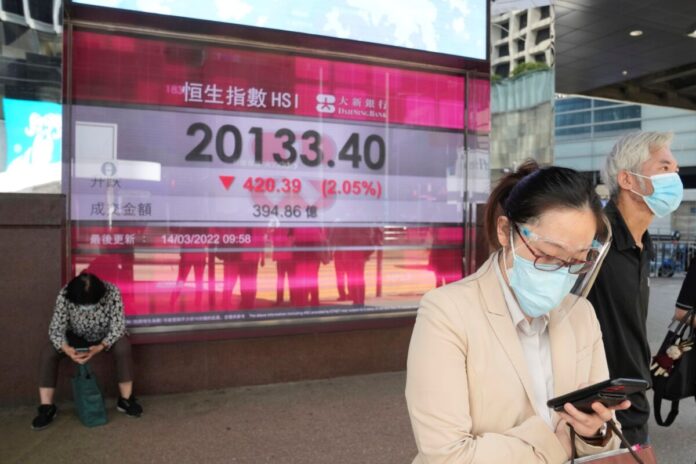 BANGKOK—Shares rose in Europe after a mixed session in Asia on Monday, where Hong Kong’s Hang Seng index sank 5 percent after the neighboring city of Shenzhen was ordered into a shutdown to combat China’s worst COVID-19 outbreak in two years.

Benchmarks rose in Frankfurt, Paris, and Tokyo and U.S. futures were higher. Oil prices retreated against the backdrop of uncertainty from the war in Ukraine.

The future for the Dow Jones Industrial Average rose 1 percent, auguring a positive start for the week’s trading. The S&P 500 future was 0.7 percent higher.

The spreading virus outbreaks in China are compounding worries over supply chain disruptions both from the pandemic and from the war.

Foxconn, supplier to Apple and other electronics brands, said it had suspended factory lines in Shenzhen due to the shutdown. In a notice to Taiwan’s stock exchange, its listed company Hon Hai Precision Industry, the world’s largest contract manufacturing company, said it did not expect the suspension to have a major impact on its business.

Infection numbers in mainland China are low compared with other countries and with Hong Kong, which reported more than 32,000 new cases Sunday. But Beijing’s “zero tolerance” strategy has led to lockdowns of entire cities to find and isolate every infected person.

The Ukraine crisis and central bank efforts to fight inflation remain the focus for most markets.

Russia’s military forces were keeping up their campaign to capture Ukraine’s capital as residents of other besieged cities held out hope that renewed diplomatic talks might open the way for more civilians to evacuate or emergency supplies to reach them.

A fourth round of talks began on Monday between Ukrainian and Russian officials.

On Friday, the S&P 500 fell 1.3 percent, and the Dow industrials lost 0.7 percent. The Nasdaq composite index gave up 2.2 percent and the Russell 2000 index of smaller companies slipped 1.6 percent.

World markets have been rocked by dramatic reversals as investors struggle to guess how Russia’s invasion of Ukraine will affect prices of oil, wheat, and other commodities produced in the region.

That’s raising the risk the U.S. economy may struggle under a toxic combination of persistently high inflation and stagnating growth. The Federal Reserve is expected to raise interest rates at its meeting this week as it and other central banks act to stamp out the highest inflation in generations, while trying to avoid causing a recession by raising rates too high or too quickly.

U.S. stocks are about 10 percent below peaks hit earlier this year, while crude oil prices are more than 40 percent higher for 2022.

Brent crude oil, the standard for international pricing, declined $5.40 to $107.27 per barrel.