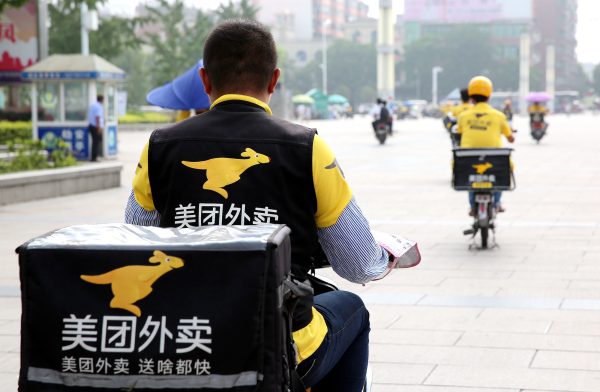 Food platform delivery drivers have emerged as a symbol of exploitation since the beginning of the pandemic, and China is no exception. But in the world’s most populous nation, they face a set of very specific hurdles due to their identity as rural migrants.

In September 2020, the popular magazine Renwu, or People, published a long-form work of investigative journalism that blew up the Chinese internet. By giving voice to couriers struggling in the face of an algorithmic regime that prioritizes speed and efficiency above all else, “Delivery Workers, Trapped in the System” sparked wide online condemnation of the industry’s labor practices.

The investigation centered on the role of Meituan and Ele.me, the two monopolies that dominate China’s booming food delivery business. Both employ “real-time intelligent delivery” systems featuring cutting-edge AI that dramatically reduces the duration it takes for orders to be delivered.

“Our slogan is ‘Meituan delivers everything fast,’” boasted Wang Xing, the founder of the company, in 2016. “The average arrival time is 28 minutes – it’s great.” But for the delivery drivers themselves, the investigation uncovered a world in which anxiety, fear, loss of pay, threat of injury and even death are normalized.

After the report was published, both Meituan and Ele.me issued public apologies, promising to improve labor conditions by reducing penalties, increasing delivery times, and improving worker safety. In February 2021, however, Ele.me became mired in further controversy after Weibo users claiming to be delivery drivers accused the company of deceptive and exploitative practices.

A month earlier, the company had faced online backlash after news emerged that the family of one of its subcontracted employees killed in a road accident would receive compensation of just 2,000 yuan ($315). Ele.me promised to increase the amount only after public outcry. In the same month, one of its drivers self-immolated after going unpaid, with videos of the incident shared on social media.

In April 2021, Meituan also faced public scrutiny after state-run television aired a documentary about the experience of a government official who worked undercover for the company, further exposing the hardships couriers face to the wider public. Just a few months prior, the company had promised to improve working conditions after one of its drivers killed a supermarket employee, sparking online debate about the stresses they face on the job.

Turning Against the Billionaires?

The growing awareness of the struggles delivery drivers face comes amid broader resentment in China about how tech firms exploit their employees. Since 2019, there has been growing popular backlash against “996,” the name given to a culture that sees staff work extremely long hours: from 9 a.m. to 9 p.m., six days a week. When the billionaire Jack Ma told young people in 2019 that working 12-hour shifts, with only one day off a week, is a “huge blessing,” he was widely mocked and derided on Chinese social media.

In October 2021, “Worker Lives Matter,” an online campaign challenging the grueling 996 work culture, was born. It began as a spreadsheet started by a few young graduates that allows employees to publicly upload the name of their company, the hours and days they work, and their salary. Later changing its name due to political sensitivities, the project went viral, bringing attention to the realities young white collar workers face and how their experiences differ from the tech sector’s public promises of reform.

But only two months after Worker Lives Matter emerged, in the early hours of December 29, 2021, a 22-year-old female employee of e-commerce giant Pinduoduo collapsed and died on her way home from work. The case caught the attention of local authorities who launched an investigation into possible labor malpractices.

Less than two weeks later, an engineer for the same company took his own life, and another employee was allegedly fired after publicly criticizing the company’s work culture. Earlier in February, an employee for the video platform Bilibili died from a brain hemorrhage amid allegations of a punishing work schedule. The story again sparked outrage online.

The frustrations of young Chinese are reflected in new buzzwords. “Involution” and “lying flat” express malaise at the professional and social pressures young people face – to the point that Chinese President Xi Jinping has publicly identified them as serious social problems. The monopoly power of big tech has triggered explicit anti-capitalist language used online and even nostalgia for the Maoist past.

But while the exploitation of young white-collar workers and food delivery drivers share obvious similarities, there are fundamental differences.

Despite owning 94.6 percent of total market share between them, the aggressive business model pursued by Meituan and Ele.me is not exactly sustainable. The labor-intensive nature of the service and regular “price wars” put downward pressure on profit margins. Locked into intense competition, the priority up until very recently has been about grabbing market share and cementing their status as monopolies rather than making money.

This highly aggressive and competitive business environment is experienced first-hand by the couriers. From the lopsided power of customer feedback to the “black box” of algorithms, technology forms a nexus whose sole function has been to constantly look for ways to increase the rate of exploitation by driving down wages.

Research by Jenny Chan indicates salaries have in some cases been slashed by half in recent years. Figures from Ele.me for 2018 show 40-60 percent of their couriers earning between 4,000-6,000 renminbi ($630-950) a month despite working very long hours, sometimes as much as 10 hours a day seven days a week due to fluctuating pay levels imposed by the algorithms. Most rely on the platforms as their main source of income.

Such severe levels of exploitation would not be possible were if it not for the identity of the delivery drivers and the structural position they occupy in Chinese society. An official report from Ele.me published in 2020 indicates the average age of its couriers is around 31 years old, while a majority come from a rural background.

Surveys conducted by both Ele.me and Meituan show the vast majority of couriers are male. Over three-quarters – 77 percent – have a rural hukou, the name for China’s internal “passport” system, and 70 percent are rural migrants. For decades, those born in rural China have been all but guaranteed to become a cheap, exploitable and disposable part of the labor force if they move to big cities.

Back in 2016, the U.N. Human Rights Commission described the hukou system as the “major pillar” behind the “sustained and systemic discrimination” against rural migrants, who are denied the same health care, education, housing, social security, and employment standards as their urban counterparts. Meituan and Ele.me take advantage of this precarity, profiting from a labor pool that lacks the same rights as urban residents.

As the Marxist feminist Holly Lewis argues, the marginalization and devaluation of any one social group is always more than a case of “hurt feelings.” Oppression and discrimination have material outcomes: they justify lower wages, allowing certain populations to benefit at the expense of the cheap labor of others.

In other words, economic exploitation and institutional discrimination feed into each other, determining the life chances of hundreds of millions of people by reinforcing vast structural inequalities that Meituan and Ele.me are only part of.

Not long after the investigation by Renwu was published, President Xi called on food delivery drivers to have their rights protected. Only months before, in May 2020, Chinese Premier Li Keqiang had publicly decried how 600 million Chinese are still forced to subside on 1,000 RMB ($157) a month.

In the time since, common prosperity has become one of the Chinese leadership’s central mantras, with Meituan among the biggest companies hit in the ongoing crackdowns on tech.

“The recent new regulatory environment change reminded us of our role in society and compels us to innovate and better contribute to society at large,” Meituan’s founder, Wang Xing, said last September. After regulators targeted the company for monopolistic practices, he donated billions to philanthropic purposes and has reassured the public that common prosperity is built into Meituan’s “genes.”

But if the past couple of years are anything to judge by, delivery drivers are also taking matters into their own hands.

The measures didn’t fall out of the sky, but followed a marked uptick in grassroots activism led by delivery drivers that coincided with growing public awareness on the back of the Renwu investigation.

Earlier in 2021, Chen Guojiang, founder of the activist group Drivers’ Alliance, was arrested for organizing fellow takeout drivers through a number of WeChat groups and providing them with support against their employers. China Labour Bulletin, a non-profit based in Hong Kong, recorded a spike in strikes and protests in 2019 compared to previous years.

Since 2014, Beijing has also initiated wide-ranging hukou reforms, especially for smaller cities. Official data suggests at least 100 million people have been granted urban hukou in the time since. Legal protections for labor were vastly strengthened in 2008, though implementation remains a problem. With rural migrants effectively second-class citizens, the same laws that apply to urban residents often exclude them.

The gig economy has flourished in China under both Xi and the previous Hu Jintao administration. Like in other countries, the explosive growth in the Chinese tech sector over the past decade has forced millions of people into new and increasingly precarious labor regimes.

With China still very much committed to capital accumulation, the question going forward is twofold. First, how far is Beijing willing to go to strong arm the billionaires who have made a killing on the backs of rural migrants? Recent events may look promising, but assurances have been made to capital also. The second, and perhaps more fundamental, question is whether genuine equity and justice can be achieved without truly empowering China’s new working class.

Common prosperity marks a step in the right direction, but expect more labor scandals inflaming Chinese social media over the coming months and years. In a vast country of 1.4 billion people where workplace violations are rife, paternalism is only likely to go so far. Before long, the leadership in Beijing may find it has to put more power in the hands of workers to struggle against capital from the bottom up.