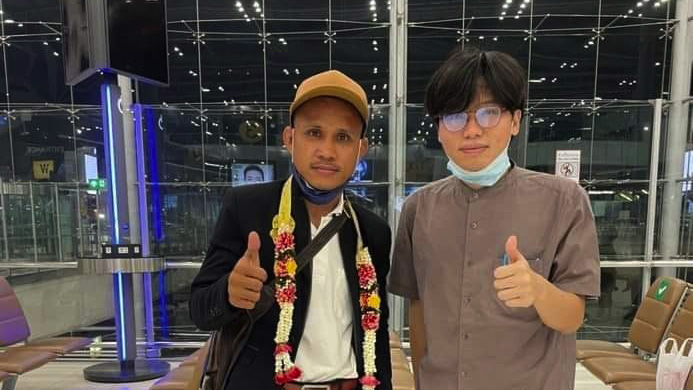 A Lao human rights activist who was living in Thailand under threat of deportation to his communist homeland has arrived in Canada where he will seek asylum with the support of the United Nations refugee agency and human rights groups.

Khoukham Keomanivong, a U.N.-recognized refugee, was convicted on Jan. 31 in a closed-door Thai trial of overstaying his visa and had been held pending deportation to Laos, where he faced arrest for his advocacy work he says he has refrained from for more than two years.

He was later released on bail and was finally allowed to leave Thailand on Thursday for Canada with the assistance of rights groups and the UNHCR. Khoukham arrived in Vancouver on Friday after transiting in South Korea and was undergoing quarantine procedures for COVID-19.

Prior to his departure from Bangkok’s Suvarnnabhumi Airport, Khoukham had vowed to “continue fighting for my life in Canada.”

“I am not safe in Thailand, therefore I have to step forward,” he told RFA’s Lao Service in a text message before boarding his plane.

A founding member of the rights group Free Laos, set up by Lao workers and residents in Thailand to promote human rights and democracy in their home country, Khoukham said last month that he had ended his political activities long before his arrest as one of the conditions of his recognition by the U.N. as a refugee. He said at the time that he would be willing to travel to a third country, although he preferred to stay in Thailand.

Netiwit Chotiphatphaisal, a democracy activist in Thailand, told RFA that he was relieved his friend was able to travel to Canada because “he earlier had fallen into crisis status and was almost sent back to Laos.

“Earlier there were some Lao people in Thailand who were sent back to Laos so he was terrified and could not sleep,” said Netiwit, who went to see Khoukham off at the airport.

“His life has been a struggle. He had been fighting for more than a month, even while fighting for the freedom of the Lao people.”

“I’m happy that he was allowed to go but unfortunately he never should have been detained in the first place when he had done nothing wrong,” he said. “He’s not a criminal, he’s only a man who fights for human rights, and he did not deserve to be arrested and jailed.”

Robertson added that Lao human rights and democracy activists living in Thailand are increasingly unwilling to gather because they fear being sent back to Laos.

Laos deals severely with dissidents who call for democracy and respect for human rights in the one-party communist state, and Lao dissidents living abroad have been harshly punished after returning or being forced back to Laos.

Human rights groups, however, criticize Thailand’s authoritarian government for recent cases in which it returned refugees and asylum-seekers to China, where they face torture, persecution and other rights abuses.

Last November, Thai authorities arrested and deported to Cambodia two activists from the banned political opposition after Cambodia’s Prime Minister Hun Sen ordered the arrest of one of them over a poem criticizing the strongman ruler on Facebook.

In early 2019, Vietnamese blogger Truong Duy Nhat was arrested by Thai Royal Police and handed over to Vietnamese police, who took him across the border into Laos, and from there back to Vietnam.

Nhat, who had been a weekly contributor to RFA’s Vietnamese Service, was sentenced in 2020 to ten years in jail for “abusing his position and authority” in a decade-old land fraud case.

Reported and translated by RFA’s Lao Service. Written in English by Joshua Lipes.