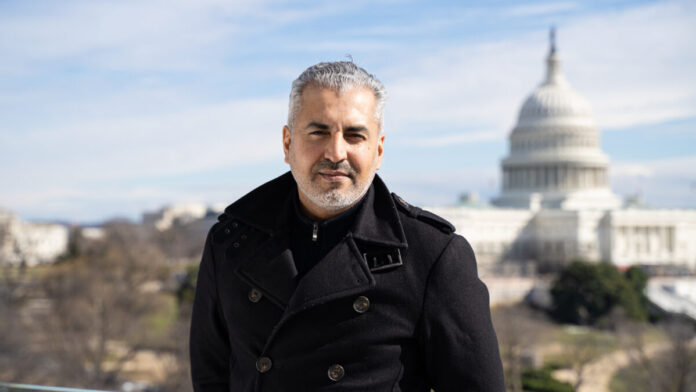 Maajid Nawaz knows what it’s like to be radicalized by outside influences, because it happened to him.

Nawaz, a former Islamic extremist and author of the book “Radical,” said recently that he’s seeing the elites in power using the same tactics his extremist organization used to undermine people’s belief systems with specific narratives.

“I do believe we, as citizens of open democratic societies, are in a war,” Nawaz told Jan Jekielek, host of American Thought Leaders, during a March 10 interview.

“Call it ideological warfare, call it information warfare. It’s a war over narrative,” he said. “And the reason is that I believe whoever gets to define narratives around world events gets to define how those world events are perceived, and therefore how we respond to them.”

“You have to destroy before you build. So, you undermine the belief system that the person already has, to a point where they don’t know who they are anymore, and then you package an alternative for them.”

Nawaz explained how the process of radicalization manipulates people’s feelings of unfairness.

“It relies on a grievance, you have to have something that the person is so agitated by, and they want a solution to, to be able to demonstrate that the status quo doesn’t solve the problem.”

Nawaz said his anger about the way he was treated as a Muslim in the U.K., and his grievance about the killings of nearby Bosnian Muslims, were exploited to recruit him into an extremist Islamic group when he was 16.

“That’s what enraged us. We felt that if, you know, if we had been there, we could have defended the community,” he said. “So, we had to organize, and that was the beginning of that journey of anger, seeking an alternative paradigm because the current paradigm, we felt, failed us.”

He said the people who recruited him and his friends fed them news and information about the Bosnian genocide of Muslims, which heightened their anger.

“That’s part of the recruitment process. We were, you know, given this information, given the news, and we were able to verify that all of that was true. Of course, it being true doesn’t mean your conclusion is true, and that’s where narrative comes in.”

Nawaz said the most effective narratives aren’t based on lies, but rather on truth. In his autobiography, he calls them “half-truths,” and said the way the truth is packaged serves an ideological agenda.

Now, he sees governments and the leaders of various thought disciplines pushing a specific narrative to gain more control over people.

Traditional disciplines such as science, academia, geopolitics, and journalism have been weaponized in the elites’ pursuit of power, Nawaz said.

“That’s the purpose of it, so that we’re all confused and in disarray, and we don’t know where the truth lies anymore. And if you look to the genius of George Orwell, in 1984, he perfectly demonstrates why that serves tyranny.”

Nawaz continued, saying there is a concerted effort among those in power to convince the public that there’s no such thing as objective truth.

“If you have succumbed to this concerted effort … that there’s no such thing as truth, then there’s no point in pursuing truth,” he said. “Everything is relative and is defined by the material circumstances that you find yourselves in.”

When people have legitimate grievances, and those grievances are not addressed or remedied, they will be vulnerable to radicalization because of their anger and frustration.

“We need to work out where our mistakes have been to make sure that we don’t perpetuate those grievances, because then you end up with this reciprocal radicalization process,” he said. “And that’s what we call the cycle of violence.”

Infiltration and the World Economic Forum

Nawaz explained that when he was a member of an Islamic extremist group, his group actively recruited members of the military and high-ranking government officials, who would carry out the work of the group from the inside.

On a global scale, Nawaz said the worldwide COVID-19 lockdowns and vaccine mandates were rolled out simultaneously in an attempt to consolidate power, as outlined by Klaus Schwab in his book, “COVID-19: The Great Reset.”

“Well, the great reset is actually this process in action. It’s why I have been able to recognize it. That’s why I warn against it. If you’ve got the World Economic Forum (WEF) saying that we need this opportunity in this global crisis and the COVID emergency, for a great reset, that’s the destroy part, because a reset is, let’s get rid of it and start again,” Nawaz said.

Schwab, founder and chairman of the World Economic Forum (WEF), has boasted in the past about the fact that members of his Young Global Leaders program, who are ideologically aligned with the WEF, have penetrated the cabinets of several countries around the world, including Canada, Argentina, and New Zealand.

“This is why they’re telling us to ‘Build Back Better’ after the chaos,” Nawaz said. “To build order from chaos, you need control … and that requires centralization.”

The phrase “Build Back Better,” an alternative phrase for the great reset, has been used repeatedly by President Joe Biden to describe his economic plan, but other world leaders, including Trudeau, British Prime Minister Boris Johnson, and New Zealand Prime Minister Jacinda Ardern.

Nawaz said groups like the Canadian truckers, who surrounded Ottawa beginning in late January 2022 and demanded an end to vaccine mandates across the country, are being falsely labeled as extremists because they are pushing back against the WEF narrative.

“They just didn’t want mandates. If you look, the majority of those truckers were vaccinated,” Nawaz said. “It’s not anti-vaccine, and definitely not a racist thing either.”

Trudeau accused the truckers of being a radical right-wing racist group, and he ordered the police to crack down on the trucker protest. The prime minister also instructed Canadian authorities to financially sanction those who took part in the trucker protest in Ottawa by freezing their bank accounts.

“That’s how you get total control over society,” he said.

Nawaz said governments and global leaders are losing control of the narrative because of widespread access to the internet and decentralized cryptocurrency, so protests against government overreach are being met with violence and false labels.

But Nawaz said Trudeau and his allies may have gone too far, too fast.

“I think they overplayed their hand, and they underestimated the power of these truckers and people power,” he said.

Nawaz said governments like Trudeau’s will continue to push for centralized power with banks and digital currency so they can consolidate power. He said citizens of the United States are fortunate to live in a society that has founding documents ensuring basic civil liberties such as free speech and states’ rights, something other developed countries don’t guarantee.

Nawaz praised the United States’ religious freedoms, and said that religious communities were at the forefront of opposing mandates because they know their rights come from God or a higher power.

Nawaz criticized big governments, “because that machine only ever grows that monster, the more you feed it, the bigger it gets.”

“And we need community leaders with strong moral compasses. And individuals that have their relationship with their higher moral hierarchy, who can guide people to good as opposed to relying on government,” he continued.

Having a higher moral guide, he said, can counter the government’s attempt to mislead us.

“What I really care about is that there’s a moral hierarchy you believe in some higher purpose, right? If you take that away from society, then you end up in a situation where there’s a void, and the state fills that void, and your moral hierarchy becomes the state, and you’re blindly following the moral compass the state sets for you.”