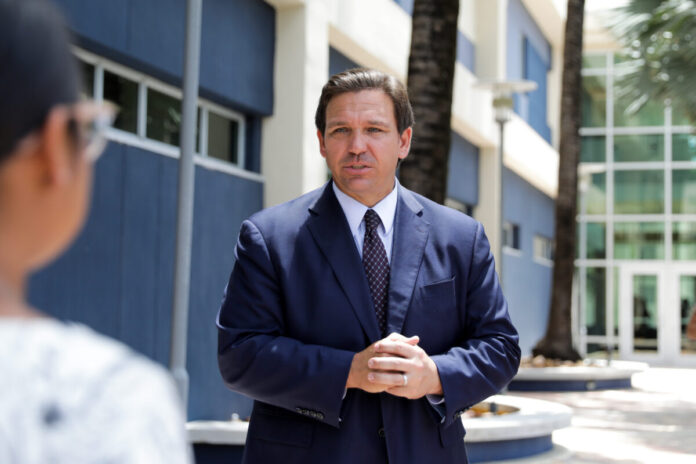 DeSantis made the comments during a roundtable discussion at a church in Doral, Fla. with Lt. Governor Jeanette Nunez and Venezuelan-American panelists.

All spoke passionately about their objections to buying oil from the South American country.

Biden banned U.S. imports of Russian oil on March 8 in retaliation for the invasion of Ukraine. Since then, U.S. diplomats have scrambled to find other energy supplies.

U.S. officials met with Maduro in the Venezuelan capital of Caracas on March 5 for the first bilateral talks in years. Venezuela has been under Washington oil sanctions since 2019.

He noted that gas prices have been climbing since Biden took office in January 2021, dealing a “huge blow” to families’ budgets.

The governor predicted, “We could end up with $5 or $6 gas before you even know it.”

“Biden’s answer is to prop up Nicolas Maduro,” DeSantis said. “So we’re saying here today, ‘No, we do not accept the fact that you are legitimizing a murderous tyrant.’

Above the roundtable stage was a large picture of Pres. Biden and Maduro greeting each other with wide grins. To the left was an image of a smiling Biden shaking hands with Russian President Vladimir Putin, and on the right was an image of Biden in a friendly greeting with China’s President Xi Jinping.

Maduro has been president of Venezuela since 2013. Some U.S. lawmakers have criticized the recent outreach to Maduro who is under sanctions for human rights abuses.

After DeSantis spoke, Nunez told of how her parents fled Communist Cuba to the United States, while other family members went to Venezuela, now led by Maduro, “a murderous thug.” They then had to flee Venezuela as it descended into the chaos of socialism.

They made “their life there, they were able to establish careers and raise their children,”Nunez said. “And sadly, they had to lose their homeland, not once, but twice, and they’ve had to move to other countries. So for me, it’s personal.”

Negotiating with Maduro is an insult to Venezuelans here, and those fighting for their freedom in that country, she said.

What’s more, she added, the Biden administration’s negotiations with Maduro “is a sign of weakness to our enemies across the globe” and “breathes new life into [Maduro’s] reign of terror.”

Florida has more immigrants from Venezuela than any other state, she added.

Congressman Mario Diaz-Balart (R), who represents a chunk of South Florida, said that by negotiating with Maduro for oil, Biden is “betraying the people of Venezuela” and the “Venezuelan cause of freedom.” And he’s hurting the national security interests of the United States, Diaz-Balart added.

Panelist Carines Moncada, a Venezuelan journalist in Miami, said, “My concern is very simple. Why would you take the business from buying oil from one dictator and give it to another dictator?

Under the Biden administration, the people of Venezuela are further away from freedom than they were under the administration of President Donald Trump, she said.

Juan Fernandez, founder of Gente del Petroleo, said the United States used to import two million barrels of oil per day. Oil-rich Venezuela could be a safe, secure supplier of energy again for America again, he said, but only if Maduro is gone.

It’s wrong to replace Russian oil by buying from Venezuela now, he said, because Maduro is allied with Russian, China, and Cuba.

Oil prices have bounced up and down since the Russian invasion of Ukraine. On March 8, it hit $128 per barrel. On March 11, it was trading at $112 per barrel. The United States had been importing 670,000 barrels per day from Russia in 2021.

Refiners in the U.S. Gulf Coast that had been importing Russian oil could process Venezuelan oil if a deal with Maduro moves forward.

California-based Chevron is the last U.S. oil producer still operating in Venezuela. The company has been barred from shipping oil from its joint ventures since 2020 and has pushed to overturn the ban.

Correspondent Natasha Holt and Reuters contributed to this report.