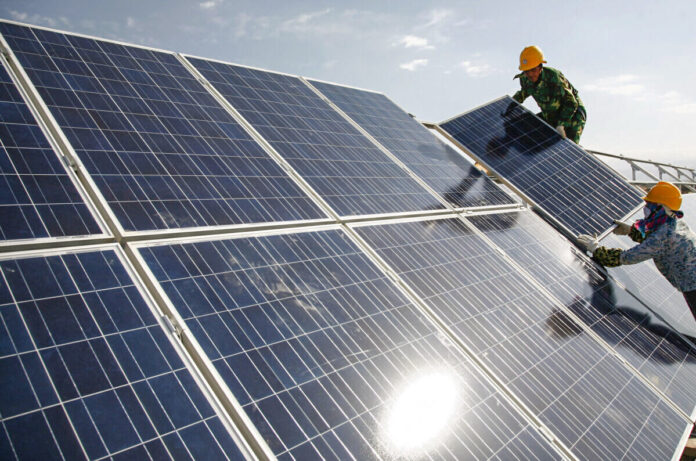 A March 9 Hudson Institute conversation has drawn renewed attention to the role of Uyghur forced labor in the Chinese-dominated supply chain for solar panels and related technologies.

Nury Turkel, a Hudson senior fellow, spoke with Laura Murphy, who co-authored a 2021 report, “In Broad Daylight,” that shed light on the solar energy industry’s great vulnerability to forced labor.

Murphy, a professor of human rights and contemporary slavery at the UK’s Sheffield Hallam University, wrote in the report that China’s Xinjiang region is the source of 45 percent of the world’s polysilicon, material that’s used in 19 out of 20 solar modules.

According to the report, China’s polysilicon industry shifted to Xinjiang roughly five years ago, lured in part by cheap coal energy but also because of financial and tax incentives, including subsidies for the use of coerced “surplus laborers” of Uyghur ethnicity.

“All polysilicon manufacturers in the Uyghur Region have reported their participation in [labor] transfer [programs] and/or are supplied by raw materials companies that have,” a summary of the report states.

“We must examine what corporations implicated in China’s forced labor practices can do to extract themselves from the complicity in this human rights crisis,” Turkel said in his introduction to the conversation, which came two days after a watchdog report alleged that multiple Amazon suppliers rely on Uyghur forced labor.

“This is an unprecedented system of forced labor that I don’t think we’ve ever seen before in the world, and that we’re just learning how to address,” Murphy said. “The only way to do a responsible thing as a corporation today is to pull out entirely from that region.”

“There’s been a slow rolling out of oppressive policies, including this conscription of labor—but also other coercive strategies that the government has used, including taking away everyone’s passport, refusing people the right to pray or to fast, [and] restricting people’s movement,” Murphy said.

“All these things have been slowly unfolding with the world not paying attention.”

Turkel, who was one of four U.S. religious freedom officials sanctioned last year by Beijing, asked Murphy why corporations that quickly pulled out of Russia after its invasion of Ukraine have been so slow to act in pulling out of Xinjiang.

“White, powerful CEOs identify with white people—and that’s a problem. But the other problem is that the Chinese government has essentially captured the market on so many of the goods we consume around the world,” she replied. “They’ve been really cowards—absolute cowards.”

In a previous Hudson event, experts discussed how the Chinese Communist Party (CCP) exerts influence on the U.S. economy as well as national security through China’s dominance of the supply chain for defense-critical batteries.

“Has the issue of batteries and supply chain tripped over that wire to where we’re now moved from ‘normal’ economic competition to economic coercion and into economic warfare?” said Anthony Vinci, an adjunct fellow with the Center for a New American Security who served as chief technology officer for the National Geospatial-Intelligence Agency under President Donald Trump.

“I would propose that we’re not quite there yet, but we’re in a state that I would call ‘preparation of the battlefield.’”