‘China may have thought this would be a quick-fix war, a surgical strike.’ — Radio Free Asia 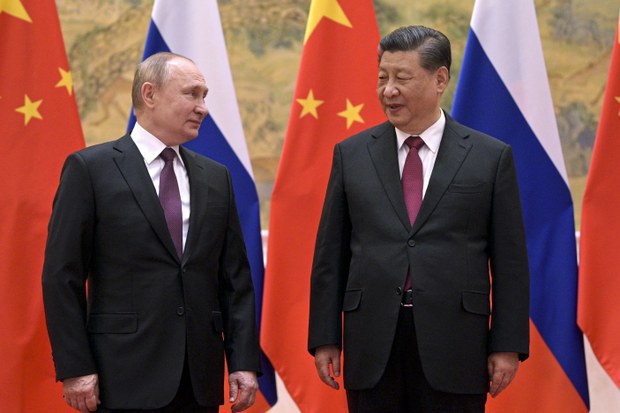 Chinese Communist Party (CCP) leader Xi Jinping has referred to Russian president Vladimir Putin as his best friend. But Russia’s invasion of Ukraine has cast doubts on whether Beijing is a more opportunistic partner wrong-footed by the global backlash against Putin, or a long-term cast-iron ally of the Kremlin. The bilateral relationship is complicated by the fact that China imports a good deal of grain from both Russia and Ukraine, and is facing a poor harvest of its own this year due to heavy rains. Rita Cheng of RFA’s Mandarin Service spoke to Tong Zhao, a senior fellow in Carnegie’s Nuclear Policy Program, about the strategic implications of Russia’s war for Beijing:

RFA: It’s said that Putin and Xi Jinping have similar personalities, and the relationship between China and Russia is largely determined by the personal friendship of the two leaders. What is your observation?

Zhao: Russia’s political decision-making mechanism is similar to China’s. That’s to say, there is a strong core leader whose authority is basically absolute and rarely questioned. Those who work for them express strong personal support for them. It’s hard for them to understand the concept of different voices, and hard for them to hear ideas different to their own. There are also similarities in the way domestic public opinion works in China and Russia, in that it’s carefully managed by the authorities and state media.

RFA: Did Putin say anything about his plans to invade Ukraine when he met with Xi Jinping in Beijing at the start of the Winter Olympics? To what extent has China misjudged its strategy?

Zhao: My personal belief is that China was likely worried at the outset. It may have believed that this would be a low-intensity, small-scale military operation. But most people in China know that Putin wields geopolitical influence with the build-up of troops, and uses soldiers to achieve his diplomatic and security goals.

China may have … thought this would be a quick-fix war — more of a surgical strike. I don’t think they can have predicted this full-scale invasion, let alone the strong reaction from the international community, nor how badly things would go for the Russian forces.

RFA: How will the Russian-Ukrainian war affect China’s strategic environment? Have its diplomatic and security circles reached any kind of view on that?

Zhao: I am guessing that Chinese foreign and security policymakers haven’t reached any consensus at all, and that they are still engaged in heated debate about what to do. No one can predict the outcome of the war, nor what kind of impact it will have on the political situation in Europe, let alone the rest of the world.

Some experts believe that the longer the war goes on, the more Russia and the West will be dragged in and consumed by European security issues, which will give China much more strategic space in the Asia-Pacific region.

But there are also concerns that this war has had a huge and negative impact on China’s international image, and that China is being dragged down by Russia, and that this will make Western countries even more concerned about China. Those of this school of thought say China’s economy is very large — Russia’s isn’t even as big as that of Guangdong province —  and its hostility to the West is at least as deep as Russia’s, so there is even more potential threat there. They think this could make the West even more determined to contain China.

I don’t think China will make significant adjustments to major strategic issues and foreign policy in the near future, because they have yet to make a final judgement on the way this war will turn out.

RFA: But are there channels open for these kinds of policy debates, when China and the West are basically living in parallel universes when it comes to the fundamental facts of this war?

Zhao: The channels through which Chinese citizens get their information are different from those in the West. The Chinese government carefully manages their access to information, and living in such a society will definitely put their academics under pressure, too. Anyone whose thinking or suggestions sound too much like the Western point of view won’t have their opinions conveyed upwards, and will also face social pressure as an individual.

Everyone wants their suggestions to be seen and given recognition by the country’s leaders, so academics lack incentive to make policy suggestions that are inconsistent with the CCP line. They will also fear being regarded by higher-ranking officials or the general public as biased towards the West, if they don’t speak out for China. So this kind of pressure reduces the diversity of public discourse. It will have a systemic impact, although there are certain risks [to China] in the long run.

RFA: What sort of risks?

Zhao: Well, in the event of an international dispute, it’s quite possible that the international community would regard a decision made by the Chinese leadership as unpredictable and incomprehensible, although it might be very popular within China. So the risk of mutual misunderstanding is quite high.

RFA: The late former Chinese ambassador to France, Wu Jianmin, once said that whenever China sees events in the world wrong, its domestic policy will also go wrong. Permitted opinion in China right now is one-sided support for Russia, perhaps more for Putin than the Russians, and they’re not talking about past Soviet aggression against China. What do you think of this phenomenon?

Zhao: These historical facts exist objectively, but when the mainstream narrative in society is systematically managed, and the government obviously does not want everyone to examine this history too much .. they’re not going to make much of an impact.

The mainstream consensus in Chinese society at this stage is that Western countries pose a strategic and all-round challenge to China’s national rejuvenation and national rise. On this issue, there is no doubt that Russia is China’s strategic partner, and Russia can provide China with strategic support; they are seen as like-minded brothers.

Mainstream thinking in China believes that there are no permanent partners, only permanent interests, and the interests of China and Russia in this regard are highly consistent. They are ‘abandoning past suspicions, not looking back on the past, and consolidating current strategic tasks.’ So it doesn’t seem as if China is willing to look back at past Soviet aggression.

RFA: What kind of lessons can Chinese policymakers learn from this war?

Zhao: Well, the outside world has been speculating about whether China will take advantage of the West’s focus on Eastern Europe to take unexpected action against Taiwan. I think this is looking less likely, though, because the Russian war in Ukraine has shown everyone how war is never that simple. China will rather want to think about how to run Taiwan after a military invasion. This is more of a constraint on Chinese military action, because if a quick solution can’t be achieved, the international community has time to intervene. Military aid and economic sanctions, over time, all take their toll, and possible trigger socioeconomic problems inside China. That’s the thing the Chinese government is most worried about. A possible challenge to the security of the CCP regime would be a far worse outcome than not invading Taiwan. So I think there are a number of considerations that will very likely make China recalculate, and rethink its strategy on Taiwan.

RFA: Based on the current situation, do you think Russia’s invasion of Ukraine is the beginning of World War III? How likely is it to turn into a nuclear war?

Zhao: Personally, I don’t think it’s appropriate to use World War III to describe the nature and potential violence of this war. It is confined to Eastern Europe, and Russia’s current strategic intention is not to provoke a larger all-out war with Western countries.

The only risk is that Russia faces a huge setback in this war, whether it be the conventional battlefield or the economic system, or even political stability at home. When Putin, as a strongman, is forced into a corner, will he escalate the war in an unexpected way, or even introduce a nuclear factor? I think this risk cannot be completely ruled out, but at present the absolute value is not high. Putin is still a rational man; it’s just that his cost-benefit calculations are different from other people’s.

He has placed Russia’s nuclear weapons to a state of high alert. From his point of view, that was to deter military aid and economic sanctions from Western countries, not to initiate the use of nuclear weapons. I don’t think he intends to create a nuclear leakage crisis at a nuclear power plant to escalate into a nuclear war. He is still relatively rational. But I do worry that as the war turns more and more unfavorable for Putin, he will start to make unexpected moves.

RFA: Ukraine, the United States and the European Union have all called on China to exert influence on Putin. Could China play the role of mediator?

Zhao: I think that would be pretty hard for them to do, for reasons of self-confidence and resources. It’s not clear whether China has enough resources to wield that kind of influence. What it has said it will do is provide a certain amount of support within its capacity, such as humanitarian aid. But that’s a long way from playing mediator.

China’s views on Russia are complicated. For a long time, China has viewed Putin with admiration and adulation, calling him ‘Emperor Putin.’ He is regarded as a powerful geopolitical master with great strategic means and is lionized by the Chinese people. China has played the role of younger brother in the Sino-Russian bilateral strategic relationship for a long time. And while that relationship is changing rapidly, particularly with the war … Beijing doesn’t seem to think it can exert influence on Russia, particularly not a figure like Putin, via the bilateral relationship.

China doesn’t actually seem to understand what kind of strategic goals Putin was hoping to achieve in the war in Ukraine. How could they then put any pressure on Putin or mediate in any way?