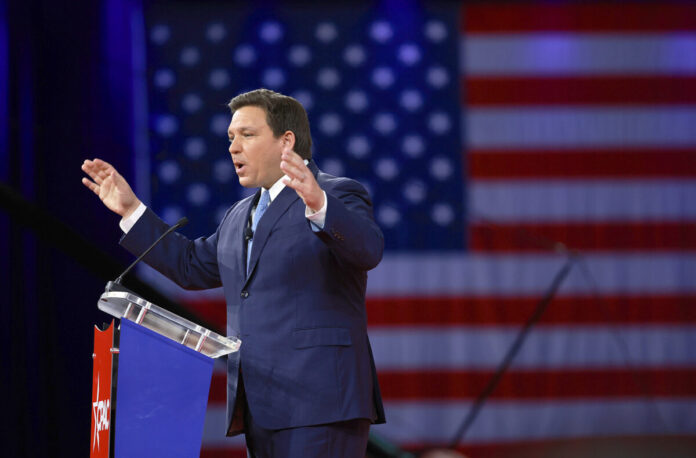 The Florida legislature has just passed a set of congressional maps. Governor Ron DeSantis, however, insists that he will not approve them, just days before the current session of the legislature is scheduled to end.

“I will veto the congressional reapportionment plan currently being debated by the House. DOA,” DeSantis said in a tweet. The state’s House and Senate voted in favor of a new congressional map on March 4. The proposal was approved by a 67-47 vote in the House and 24-15 in the Senate, with some Republicans voting in support.

DeSantis had earlier proposed a map that would create 20 GOP districts and eight Democrat districts. In comparison, the latest map approved by the House and Senate will create 18 red districts and 10 blue ones.

The Senate had passed a map in January that would retain the GOP’s 16 congressional seats. However, DeSantis asked the state Supreme Court to determine whether black Representative Al Lawson’s (D-Fla.) seat, which combines the two black neighborhoods of Jacksonville and Tallahassee, was constitutional. After the court declined DeSantis’ request, the governor made it clear that he would veto any map that retained Lawson’s seat.

The newly approved map released by the House last week removed Lawson’s seat, and replaced it with a seat in Jacksonville that Republicans say will guarantee a black candidate is elected. The legislation also includes a second map that retains Lawson’s seat in case a court strikes down the first proposed map.

Though some GOP members call the legislature-approved map constitutional, DeSantis said that he will continue to be against it due to legal concerns. “I don’t bluff. What makes you think when I say I’m going to do something that I’m not going to follow through?” DeSantis said at a press conference. “I don’t make declarations lightly.”

The Florida governor insisted that he will not be signing any congressional map that has an “unconstitutional gerrymander” in it. Gerrymandering involves manipulating the boundaries of an electoral constituency to favor a specific class or party. Ryan Newman, DeSantis’ lawyer, called Lawson’s congressional district an “illegal gerrymander.”

Lawson slammed the new map, calling it unconstitutional as it violated the Fair Districts provision of the Florida Constitution and the Voting Rights Act of 1965. The maps dilute the voting power of minority communities, diminishing the ability of African Americans to choose a representative they want, he stated.

“The primary map adopted today by the Florida Legislature was drawn with the clear intent to create additional seats for one political party at the expense of Black voters,” Lawson said in a statement.

Carey Baker, a former Republican state Senator, called DeSantis’ congressional map, “both fair and constitutional.” Speaking to Breitbart, Baker pointed out that the current state map was drawn by Democrats and adopted by a liberal court.

“There are easily 100 different ways to draw a constitutional redistricting map. I hope the legislature takes into count the Governor’s concern,” Baker said.