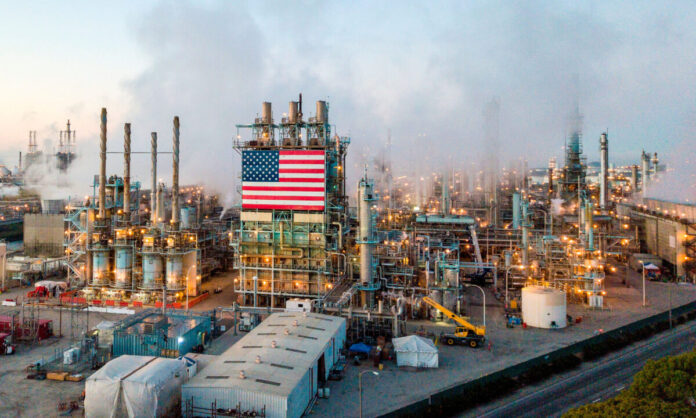 The United States and the rest of the world face a conundrum.

Crude oil prices are above $100 for the first time in nearly eight years amid tight market conditions and Russia’s invasion of Ukraine.

If the West were to impose embargoes on Russia’s oil and gas exports, which are an immense source of revenue for the Kremlin, energy prices would spike.

JPMorgan Chase analysts estimate that the cost for a barrel of oil could average $110 in the second quarter, should the Ukraine-Russia conflict escalate further. But other Wall Street firms forecast that West Texas Intermediate (WTI) and Brent crude prices could easily top $120 barrel if the situation in Eastern Europe intensifies.

“We’re not going to do anything which causes an unintended disruption to the flow of energy as a global economic recovery is still underway,” Singh recently said at a White House news conference. “This is the one area where Russia has systemic advantage in the global economy.”

But while some Ukrainian lawmakers urge countries to ban Russian energy products, global leaders have been apprehensive, choosing instead to impose sanctions on Putin, state-owned firms, the Central Bank of Russia, and the Ministry of Finance.

Others purport that the United States could accelerate crude production to inject more supply into global energy markets. Industry observers aver that this would effectively bring down crude prices and hurt the Russian government’s pocketbook.

White House press secretary Jen Psaki dismissed this recommendation, telling ABC’s “This Week” that the proposal is a “misdiagnosis.”

“We need to reduce our dependence on foreign oil, on oil in general, and we need to look at other ways of having energy in our country and others,” she said, adding that the United States needs to generate more solar and wind power.

Biden warned the American people before the invasion that they would likely endure higher gasoline prices as a result of defending freedom in Kyiv.

The national average price for a gallon of gasoline is $3.62 as of March 1, according to the American Automobile Association (AAA).

Currently, the United States produces approximately 11.5 million barrels per day (BPD) of crude. This is down from the pre-COVID peak of 13.1 million BPD.

Energy analysts purport that oil and gas firms have been hesitant to turn on the taps because of regulatory uncertainty stemming from the president’s green energy agenda. Other companies also want to maintain a strong balance sheet.

Over the last several months, the White House has pursued other methods to diminish consumer pain at the pump.

One of Biden’s strategies has been to demand the Organization of the Petroleum Exporting Countries (OPEC) and its allies, OPEC+, to increase output. The cartel rejected this request, maintaining its post-pandemic modest approach to production.

U.S. officials are negotiating with Iran to establish a new nuclear agreement. If approved, sanctions could be removed, and Tehran could pump millions of barrels of oil into global energy markets.

The U.S. Department of Energy also released 50 million barrels of oil from the Strategic Petroleum Reserves (SPRs) late last year. In January, the federal government tapped another 25 million barrels from reserves. Reports suggest that the administration is considering repeating this action.

However, industry observers have scoffed at these measures because EIA figures highlight that the country consumes between 17 and 20 million barrels a day.

Even if a ceasefire agreement is established between Moscow and Kyiv, the bombardment of financial and economic sanctions on Russia and the fragility of Ukraine “will keep the energy crisis stoked and oil well above $100 per barrel in the near-term and even higher if the conflict escalates further,” says Louise Dickson, a senior oil market analyst at Rystad Energy, in a note on Monday.

Is it time for the White House to give the go-ahead to “drill, baby, drill”?