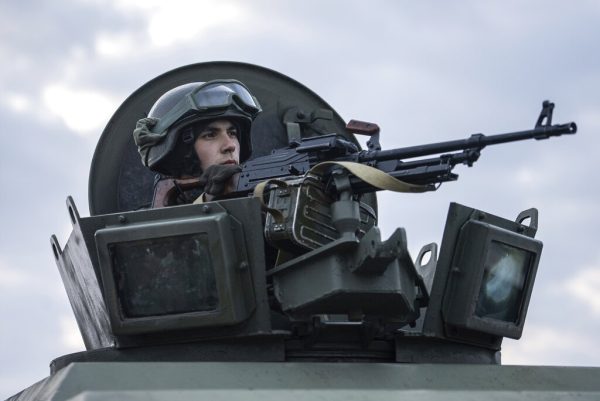 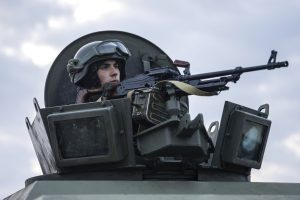 A Ukrainian National guard soldier guards a mobile checkpoint together with the Ukrainian Security Service agents and police officers during a joint operation, in Kharkiv, Ukraine, Thursday, Feb. 17, 2022.

On February 21, 1972, U.S. President Richard Nixon set off on his secret visit to Beijing, ending Washington’s 25 years of no open communication with China. Next week marks the 50th anniversary of the trip, and reflections on the event’s importance are ever more prescient today. According to some, the lesson from 1972 is that grand geopolitical battles are difficult to fight across two fronts (a superpower “truel,” if you like).

By making friends with China, not only did Washington remove Beijing as a rival, but it also widened the divisions between the Chinese and the Soviets, the so-called “Sino-Soviet split.” Washington wanted to engineer a Sino-Soviet split so as to better extricate itself from the Vietnam War, and from other conflicts in Southeast Asia, such as the Cambodian civil war. Where would the United States intervene after 1972? The Middle East, the Caribbean and, in the late 1990s, the Balkans. Not, indeed, in Asia. One might argue that it was a mistake for the U.S. to “leave” Southeast Asia in the 1970s, a period thereafter marked by “benign neglect,” and that President Barack Obama’s “pivot” back to Asia in the early 2010s was a correction to that mistake.

Last month, the head of Germany’s navy, Kay-Achim Schönbach, resigned after he was recorded making some rather sonorous comments about Vladimir Putin. “Having this big country, even if it is not a democracy, as a bilateral partner… probably keeps Russia away from China,” he was recorded saying. The “reverse Nixon,” as it could be called, the idea that the West should make friends with Russia so as to weaken Russia-China ties, isn’t an unpopular theory amongst strategic thinkers, and it was a policy that Obama dabbled with during his presidency, and Donald Trump ham-fisted during his. Even amid the possibility of a Russian invasion of Ukraine, it hasn’t lost its appeal.

For some Indo-Pacific specialists (“Indo-Pac’ers,” if you will) any U.S. retreat from other parts of the world should be supported if it’s followed by further pivoting to Asia. There are many examples of this argument, but let’s take Elbridge Colby and Oriana Skylar Mastro’s piece in the Wall Street Journal this week, titled “Ukraine Is a Distraction From Taiwan.” They argue that the U.S. “can no longer afford to spread its military across the world. The reason is simple: an increasingly aggressive China.” The 6,000 extra U.S. troops sent to Eastern Europe this month, they say, “are precisely the kinds of forces needed to defend Taiwan.” And they conclude, “The U.S. has no hope of competing with China and ensuring Taiwan’s defense if it is distracted elsewhere. It is a delusion that the U.S. can, as Pentagon press secretary John Kirby said recently, ‘walk and chew gum at the same time’ with respect to Russia and China.”

Of course, as Colby and Mastro argue, in an ideal world Europeans should be able to defend their continent by themselves against a Russian invasion. But they cannot, clearly. The Indo-Pac’ers argue that America today needs to retreat from Europe and the Middle East (a process already begun in the latter) and focus entirely on the Indo-Pacific, and holding one’s nose and making peace with Vladimir Putin is a means of achieving this. Colby and Mastro sum up the opinions of many when they write, “Denying China the ability to dominate Asia is more important than anything that happens in Europe. To be blunt: Taiwan is more important than Ukraine.”

To offer the obvious response, Western interests would hardly be served if Vladimir Putin simply marched his troops into Ukraine without any American pushback. What message would that have sent to Xi Jinping? A less obvious retort is that much of this debate comes down to how one imagines a Chinese attack on Taiwan will manifest. If it’s a direct assault by Beijing with Chinese troops and naval vessels, maybe Colby and Mastro have a point. The United States will need all of its resources focused on that event. Then again, even if the U.S. only focused on the Taiwan issue and ignored all other geopolitical problems, it still might not have the military capabilities to prevent a full Chinese invasion. One should also consider the improbability that the U.S. would fight against China unless an American soldier was first injured by Chinese forces. It’s uncertain whether the U.S. public would support a military defense of Taiwan if there wasn’t first direct Chinese aggression toward the U.S., which Xi, we have to assume, understands.

However, a direct assault by China against Taiwan is uncertain. It strikes me as more probable that Beijing would attempt some sort of naval blockade of Taiwan coupled with a complex cyberattack on Taiwan and the West’s institutions, possibly a cyber strike on the U.S. financial system. If one grants that this is a possibility, it is by no means clear why it would make sense for Washington to decouple its military from Europe, Latin America, and the Middle East to focus entirely on the Indo-Pacific. If Beijing attempts a blockade of Taiwan, what good would come from all U.S. naval vessels being stationed near the island? If the tens of thousands of U.S. troops now stationed in Europe were relocated to bases in Asia, what good could they do against coordinated cyberattacks?

Nixon’s visit to Beijing 50 years ago was yet another example of history’s law of unintended consequences. Arguably, China was the greatest beneficiary of the liberal international order that it was welcomed into after 1972. Today, it stands as the greatest threat to that order. The Indo-Pac’ers may want to remember this law of history. What happens if they get their way and America retreats from other parts of the world and focuses on the Indo-Pacific? Other threats, like Putin’s Russia, would be further emboldened. Iran could gain preponderance in the Middle East. Africa could be left beholden to the world’s despots. Europe, in the words of Larry Summers, will remain as “a museum,” and Japan “a nursing home.” What good is served if the rest of the world burns while the United States sits distracted by the possibility of a Chinese attack on Taiwan that may never happen?