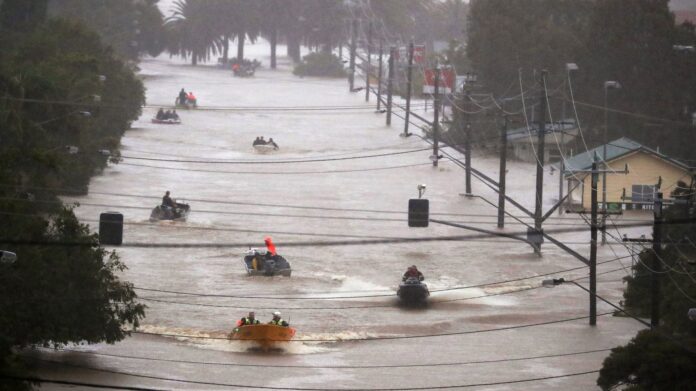 SYDNEY, Australia ― At least eight people have died after flash floods swept through parts of Australia’s east coast over the weekend and on Monday.

Torrential rain lashed the state of Queensland last week and over the weekend, leaving its southeastern regions and parts of the capital city, Brisbane, underwater. Images and videos revealed main roads and homes swallowed by floodwaters, large boats and jetties floating unmoored along the swollen Brisbane River and severe damage to property and vehicles.

One video recorded Sunday showed a houseboat colliding with a ferry terminal, then sinking. Onlookers pulled a 70-year-old man who was aboard the houseboat from the water. Although he was uninjured, the boat was destroyed.

The state’s premier, Annastacia Palaszczuk, said Monday that up to 18,000 homes had been flooded across the region. Over 1,500 people were in evacuation centers and more than 1,000 schools were closed.

Many Brisbane residents also lost power, with energy providers warning it may be days before it was safe to restore it.

On Sunday, Palaszczuk called the weather event a “rain bomb,” and described unrelenting “waves of water just coming down.”

The disaster is the worst of its kind in a decade for Queensland, which faced destructive flooding in 2011 that left 35 people dead and billions in damage and economic losses.

On Monday, the northern New South Wales city of Lismore saw its worst flooding in history, leaving people stranded on their rooftops and prompting close to 1,000 rescue calls when fast-rising floodwaters engulfed homes.

“This is a natural disaster of unprecedented proportions,” Stephanie Cooke, the state’s minister for emergency services, said.

Australia has been hit with a series of extreme climate events over the past few years, including the 2019-2020 wildfires, drought and now historic floods.

The country’s conservative government has been resistant to strong action against climate change and refuses to commit to phasing out coal power.