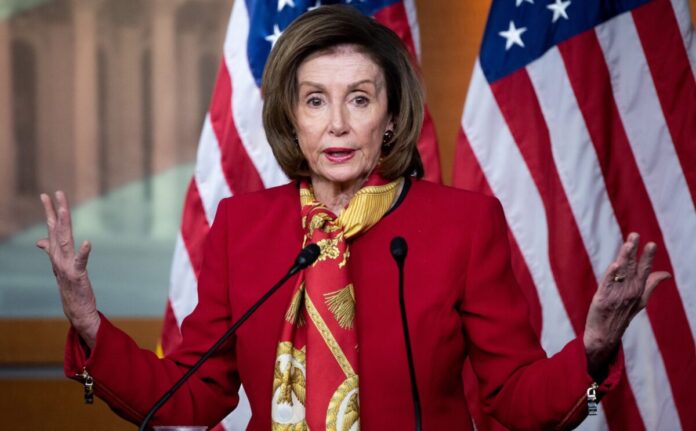 During a weekly press conference on Thursday, Speaker of the House Nancy Pelosi (D-Calif.) said that Russia’s invasion of Ukraine is to blame for increasing gas prices. Pelosi indicated also that she would support a measure by Sen. Joe Manchin (D-W. Va.) to ban imports of Russian oil, but said she is opposed to increasing domestic oil production.

In a question to Pelosi, a reporter noted that in Pelosi’s home district, the San Francisco Bay Area, gas prices have exceeded $5 per gallon for the first time in history.

“I’m not for drilling on public lands,” Pelosi said curtly.

Most notably, Biden ended construction on the Keystone XL pipeline—which has been staunchly opposed by environmental alarmists since President Barack Obama’s time in office—and placed a moratorium on the leasing of federal lands to oil and natural gas producers.

Democrats, who share Biden’s attitude toward climate policy, have applauded the move for its potential effect on reducing U.S. emissions.

However, the American people still rely on oil-based fuels for almost all of their travel. Thus, as the domestically-produced supply of oil has fallen, the United States has become dependent on the Organization of Petroleum Exporting Countries (OPEC) and Russia. In turn, the price of energy—particularly gasoline—has risen dramatically, far outstripping the rate of overall inflation.

According to the most recent Consumer Price Index data released by the U.S. Department of Labor, prices have increased by 7.5 percent on average over the past 12 months. The price of gasoline, by contrast, has increased by 40 percent.

“How high do gas prices need to get before you would support something like opening up federal lands to drilling?” the reporter asked Pelosi.

Pelosi did not answer the question right away but argued that increasing prices are a result of the Russian invasion of Ukraine.

“Well let me just say that the issue of the price of gas and the price of oil is directly related to what is happening in the Ukraine,” Pelosi claimed, despite the fact that oil and gas prices had been rising since well before the start of the Ukrainian conflict.

Pelosi chided Americans for being more concerned about the price of gasoline than they are about the Eastern European conflict.

“I heard a parliamentarian from Ukraine today saying, ‘Our people are being killed, our country is being overrun, and people are complaining about paying a little more for the price of gas,’” Pelosi said.

One suggestion that she noted to lower the price of gas is a holiday from the federal gas tax, which has been proposed by several members of Congress. However, she argued that this course is more difficult than it seems.

Pelosi said that Congress could not guarantee that oil companies will “pass that reduction on to the consumer.”

“It’s very hard to write a bill that requires them to pass it on to the consumer,” Pelosi continued. “If we can have a holiday that guarantees the consumer benefits rather than more profits for the oil companies, that would be a path that we can take.”

Pelosi indicated that another option would be for Biden to release more oil from the Strategic Petroleum Reserve (SPR), which he did once near the end of 2021.

The move was criticized by President Donald Trump and Sen. Lindsey Graham (R-S.C.), as well as by other prominent GOP figures.

Sen. Joe Manchin (D-W. Va.) did not consider the SPR to be a long-term solution either. Rather, he called the withdrawal of oil from the SPR “an important policy Band-Aid for rising gas prices,” but warned that Biden’s “short-sighted energy policy” was not sustainable.

Manchin at the time called for Biden to recommence construction on the Keystone pipeline.

On Tuesday, Manchin re-upped that demand, calling Biden’s energy policy “hypocritical” for cutting domestic production while relying on Russian oil despite the U.S. condemnation of Russia’s invasion of Ukraine. On Thursday afternoon, Manchin and other lawmakers will introduce legislation to ban Russian oil imports.

It is not yet clear if Manchin’s bill will provide for increased domestic production of oil through a reversal of Biden’s energy policies.

If the United States does ban Russian imports without increasing its domestic production of oil—a move that would drastically limit the supply of available oil in the United States—consumers could see prices rise even further in the coming weeks and months.

Joseph Lord is a Congressional reporter for The Epoch Times who focuses on the Democrats. He got his Bachelor of Arts in Philosophy from Clemson University and was a scholar in the Lyceum Program.