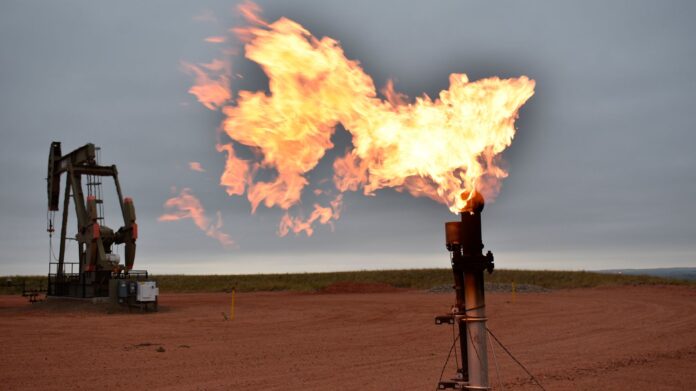 Republicans, including some of the biggest recipients of fossil fuel campaign donations, are blaming Russia’s invasion of Ukraine on President Joe Biden’s energy policies, citing the crisis to justify more oil and gas drilling at home.

“Vladimir Putin said, ‘Joe Biden is weak. I am going to move forward,’” said Blackburn, who has received more than $800,000 in oil and gas industry donations over her career.

Putting aside that the senator’s comments sound like someone with a direct line to the war-hungry Russian president, there is nothing to indicate that Biden’s energy agenda — specifically, revoking a key permit for the Keystone XL pipeline or pausing new oil and gas leasing on federal lands and waters — motivated Putin to attack Ukraine.

Beyond that, any claim that Biden has “ended” federal fossil fuel drilling in the U.S. is simply false. The administration recently paused new federal leasing and permitting in response to a Trump-appointed judge’s ruling that blocked the administration from using a higher calculation for the damages associated with planet-warming greenhouse gas emissions.

Republicans have embraced the talking points as part of a broader partisan effort to place the responsibility for Russia’s attack at Biden’s feet. That effort has primarily consisted of vague attacks painting Biden as “weak” and ignored actions the administration has taken to try to ease soaring energy costs, including appealing to both U.S. drillers and other oil-rich nations to increase production. He’s also signaled that he’s considering releasing more oil from the U.S. strategic petroleum reserve and temporarily suspending the federal gas tax.

Biden “shuts down American energy production” — he hasn’t done that — “and greenlights Russian energy production,” Sen. Josh Hawley (R-Mo.) said during a speech Thursday at the Conservative Political Action Conference, or CPAC, in Orlando, Florida. “Is it any wonder that Vladamir Putin feels emboldened to do whatever the heck it is he wants to do?”

Rep. Cathy McMorris Rodgers (R-Wash.), the ranking minority member of the House Energy and Commerce Committee, told The Hill that for America to maintain its status as a diplomatic and military power, it has to be a fossil-fuel-producing economic power.

“It’s all connected,” she said, “and President Joe Biden is undermining it all with his radical agenda to shut down American energy and embolden our enemies like Russia.”

In a series of Tweets, Sen. Steve Daines (R-Mont.) argued that Putin was “empowered and emboldened by Biden’s disastrous withdrawal from Afghanistan and his approval of Russia’s Nord Stream 2 pipeline while killing America’s Keystone XL pipeline.”

The White House maintains that Biden has always opposed Nord Stream 2, an $11 billion pipeline that runs between Russia and Germany but is not yet operational. But last year he waived sanctions against the company behind the project, citing a desire not to negatively impact ally Germany. The administration reversed course earlier this week in response to Russia’s aggression in Ukraine, sanctioning both the company, named Nord Stream 2 AG, and its corporate executives.

Hawley, McMorris Rodgers and Daines have received $289,000, $767,000 and $1.2 million, respectively, from the oil and gas industry over their careers, according to the Center for Responsive Politics data.

South Dakota Gov. Kristi Noem (R) offered the most conspiratorial interpretation of the ongoing conflict, suggesting that Biden sparked the war intentionally via his energy and climate policies.

“It feels planned to me,” she told Fox News’ Sean Hannity.

On one hand, Biden blocked the crucial Keystone XL Pipeline, signaling to the world that American energy independence is no longer a priority.

On the other hand, he green-lit the Nord Stream 2 pipeline, strengthening Russia’s energy hold on Europe. pic.twitter.com/mhkBwBas8g

The same Republicans are using the crisis to push for more domestic oil and gas production, though that would do little, if anything, to deter Russia’s attack on Ukraine or provide immediate relief at the pump.

In a video posted to Twitter, Rep. Lauren Boebert (R-Colo.) called on the White House and Congress to “immediately unleash our full energy production capabilities” and increase exports of liquified natural gas. The fossil fuel industry is a top-five contributor of Boebert’s, and oil and gas company Terra Energy pays Boebert’s husband nearly half a million dollars per year.

The list mirrors one that the American Petroleum Institute, the industry’s largest trade association, posted to its Twitter profile Wednesday.

White House press secretary Jen Psaki was asked during a press conference Thursday whether Biden would consider lifting restrictions on domestic energy production or review his decision on Keystone XL in light of the Ukraine crisis.

“First of all, the Keystone Pipeline is not flowing, so I’m not sure how that would solve anything,” Psaki said. “There’s also plenty of oil leases that are not being tapped into by oil companies, so you should talk to them about that and why.”

Biden has acknowledged that the Russian invasion of Ukraine could impact the U.S. economy and stressed that U.S. fossil fuel producers “should not ― should not ― exploit this moment to heighten their prices to raise profits.”

“I know this is hard and that Americans are already hurting,” Biden said during a Thursday press conference. “I will do everything in my power to limit the pain the American people are feeling at the gas pump.”