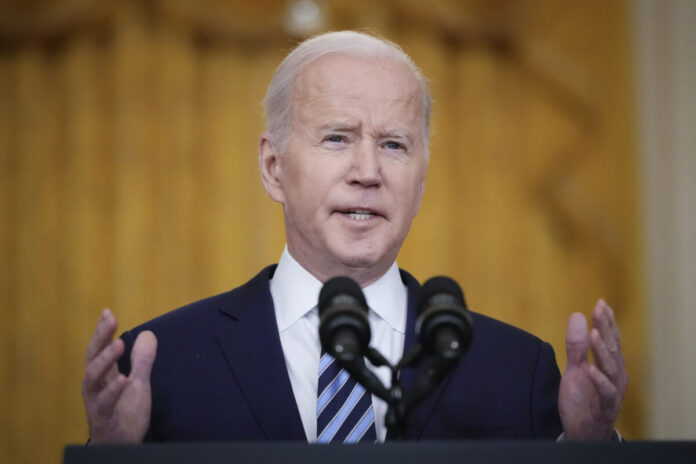 “American oil and gas companies should not—should not—exploit this moment to hike their prices to raise profits,” U.S. President Joe Biden said in a televised speech announcing the sanctions. “In our sanctions package, we specifically designed [it] to allow energy payments to continue. We are closely monitoring energy supplies for any disruption. We’ve been coordinating with major oil-producing and [oil] consuming countries toward our common interest to secure global energy supplies.”

Biden noted that the United States was prepared to release more oil from its strategic petroleum reserves “as conditions warrant.”

The U.S. measures, detailed in a White House statement, target various Russian financial institutions. They also encompass financial restrictions on “Russian elites and their family members,” along with limits on debt and equity for Russian energy firms, including the state-controlled firm Gazprom and its subsidiary, Gazprom Neft, as well as the pipeline firm Transneft.

In his speech, Biden said his administration is using “every tool at our disposal” to limit the effect on gas prices, but noted that gasoline prices for Americans are likely to be affected by the sanctions.

In addition, those sanctions limit EU financing to Russia.

“The Council decided to introduce a sectoral prohibition to finance the Russian Federation, its government, and Central Bank,” the EU said in a statement. “By restraining the ability of the Russian state and government to access the EU’s capital, and financial markets and services, the EU aims to limit the financing of escalatory and aggressive policies.”

The Epoch Times has reached out to the EU regarding its sanctions and their intended effect on the Russian energy industry.

Ukrainian officials have been advocating for tough sanctions on Russia.

“Right now, Putin is plunging Europe into its darkest time since 1939. Any government hoping to sit this out is naive. Don’t repeat mistakes of the past. Hit Russia with severe sanctions now. Help Ukraine with military and financial support. Together we can #StopRussianAggression,” Ukrainian Minister of Foreign Affairs Dmytro Kuleba, wrote on Twitter on Feb. 24.

Ukrainian President Volodymyr Zelensky wrote on Twitter on Feb. 24 that “a package of additional tough sanctions against Russia from the EU is approaching. Discussed all the details with [French President Emmanuel Macron]. We demand the disconnection of Russia from SWIFT, the introduction of a no-fly zone over Ukraine, and other effective steps to stop the aggressor.”

The EU relies on Russia for up to 40 percent of its gas.

“Biden’s actions on no Russian export limits keeps Russian barrels in the market, and a lid on prices by not cutting 9 million barrels out of the stack,” Paul Copello, president of IIR Energy, said in an email to The Epoch Times. “That decreases the probability of a supply disruption from the West banning purchases of oil and natural gas into Europe or elsewhere, and is the main reason that oil sold off from its highs today.”