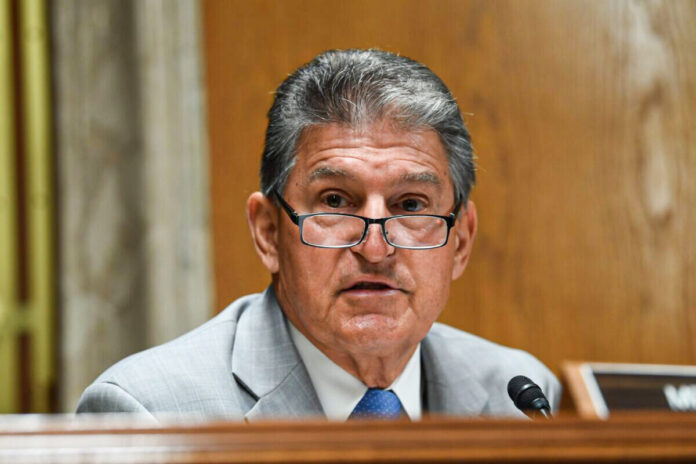 Manchin first called for an end to imports of Russian oil on March 1.

Despite the U.S. condemnation of the Russian invasion of Ukraine, Manchin noted that the United States still imports roughly 500,000 barrels of Russian oil per day. Manchin called that policy “hypocritical,” and demanded that President Joe Biden move to increase U.S. oil production and to ban Russian oil imports.

Upon taking office, Biden, citing an alleged “climate crisis,” overturned several Trump-era policies that had boosted the United States to energy independence for the first time in decades.

Most notably, Biden ended construction on the Keystone XL pipeline—which has been staunchly opposed by environmental groups since the administration of President Barack Obama—and placed a moratorium on the leasing of federal lands to oil and natural gas producers.

As early as November 2021, Manchin, who has long been skeptical of his party’s environmental alarmists, called on Biden to restart construction on the Keystone pipeline.

On March 3, Manchin, flanked by members from both chambers of Congress and both parties, renewed calls to increase U.S. oil production and to decrease its dependence on Russian oil. These two policies, he said, would help the United States to support its allies and further cripple the Russian economy.

“The United States has the ability to backfill and help all of our allies around the world as [Russia] uses energy as a weapon,” Manchin said.

“We [produce energy] cleaner than anybody else; we do it in a better fashion than anyone else.

“We have the ability with [U.S. oil] reserves to do much more during this crisis.”

Sen. Lisa Murkowski, a GOP swing-voter who has long worked with Manchin on various issues, said the bill is one that “can make a difference, can get Putin’s attention.”

Since the invasion of Ukraine, President Vladimir Putin and Russia have been the target of debilitating sanctions from most of the Western world, which include barring many major Russian banks from using the SWIFT payment system. These penalties have cut the value of the ruble almost in half.

The proposal, House co-sponsor Gottheimer noted, “would cut Putin off from his largest revenue source,” further isolating the Russian economy from the world.

On March 1, House Speaker Nancy Pelosi (D-Calif.) tentatively gave her support to the bill. However, she said she opposes efforts to increase U.S. oil production, which Manchin has said is a critical aspect of keeping U.S. gasoline prices down.

As the domestically produced supply of oil has fallen, the United States has become more dependent on the Organization of Petroleum Exporting Countries (OPEC) and Russia. In turn, the price of energy—particularly gasoline—has risen dramatically, far outstripping the rate of overall inflation.

According to the most recent Consumer Price Index data released by the U.S. Department of Labor, prices have increased by 7.5 percent on average over the past 12 months. The price of gasoline, by contrast, has increased by 40 percent.

If the United States banned Russian oil without an increase in domestic production, further limiting the supply of oil, consumers could see prices rise even further. Still, many Democrats—particularly left-wing progressives—remain staunchly opposed to increasing the U.S. extraction of fossil fuels, and would likely fight efforts to reverse the Biden administration’s energy policies.

Canada, which is the world’s fifth-largest oil producer, has already banned the importation of Russian oil.

Joseph Lord is a Congressional reporter for The Epoch Times who focuses on the Democrats. He got his Bachelor of Arts in Philosophy from Clemson University and was a scholar in the Lyceum Program.