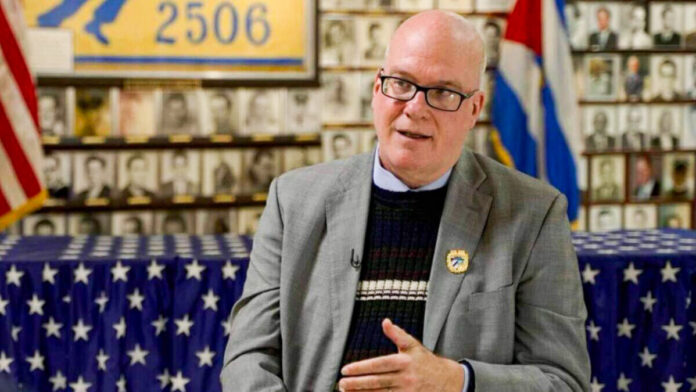 Cuba is a major hub for a worldwide totalitarian movement and its intelligence network has spread its influence throughout the Western Hemisphere, said Orlando Gutierrez-Boronat, coordinator of the Assembly of the Cuban Resistance.

The communist Cubans have provided the intelligence structure and the organizational structure for the Chinese regime to expand their power in the Western Hemisphere, Gutierrez-Boronat told EpochTV’s “Crossroads” program.

Cuba, with its key strategic location, has been an ideal platform for influencing the United States and Latin America, the activist said.

“They’re [a] very considerable foe for the United States and the Western Hemisphere.”

The Cuban Communist Party is very confident that it’s gaining ground in Latin America and the United States, the activist said. Communists believe that “although [the American] nation is stronger, culturally, it’s weaker.”

“So they have a very long term view of how to corrode our institutions, how to penetrate them from below in order to weaken the resolve to resist tyranny.”

The Cuban communists perceive the internal polarization and division in the United States as the right moment for a class struggle, which it disguises as a racial struggle, Gutierrez-Boronat said.

“All these weaknesses make it easier for totalitarian ideology to prosper. And for many young people, it makes their resolve to resist this totalitarian tyranny far weaker.”

Although Cuba is a small country, it’s very influential in the United States because of its history and culture, Gutierrez-Boronat said.

Cuban communists developed a long-term presence of Cuban communist intelligence throughout the hemisphere during 63 years of their rule, the activist said. They identified, recruited, and placed in pivotal positions key assets of communism, and this is what they contribute to their relations with the Chinese Communist Party (CCP).

The Cuban communist regime has influenced Venezuela, Gutierrez-Boronat said, adding that Venezuelan leader Nicolás Maduro was recruited by Cuban communists, trained in Cuba, supported and aided in achieving power by the Cuban regime, and now is indebted to the regime.

The regime has also influenced Nicaragua, had a very active role in subverting Colombia and bringing down its economy, and has a very close alliance with the government of Mexico and the president of Honduras, Gutierrez-Boronat said.

“The government of Argentina is also a sympathizer with that regime.”

In December 2021, Nicaragua seized Taiwan’s former embassy to give it to Beijing, after the Central American state unilaterally terminated diplomatic relations with the self-governed island in favor of China and declared Taiwan as part of the Chinese territory.

New Honduran President Xiomara Castro floated the idea of dropping diplomatic ties with Taiwan in favor of the Chinese regime during her election campaign. However, after Taiwanese Vice President William Lai attended Castro’s inauguration at the end of January, the newly elected president decided to maintain diplomatic relations with Taipei.

It’s believed the People’s Armed Police had been sent by Beijing to suppress protestors of the Hong Kong pro-democracy movement in 2019.

“I believe these totalitarian states—Iran, Russia, China, Cuba, Venezuela—have a joint command where they analyze, study, and implement policies to put down popular uprisings. There’s a similar pattern which they repeated in every country from what they learned of how to crush a people’s uprising. Before the early 1990s, communists couldn’t stop popular uprisings; now they’ve learned how to do it,” Gutierrez-Boronat said.

Activists called this “the new generation of communism.” To deal with this new phase of communism, the same kind of strategy is needed that was used to defeat the Soviet Union, he said.

“Unless we get on the same level with a coherent strategy, we will be defeated in the long term.”

“The Soviet Union fell as a result of a combination of forces that were coalesced and were channeled in a very effective manner by a proactive strategy implemented by the United States. And this brought together both political defiance, grassroots organization, as it happened in Poland, but also military means. The U.S. did not shirk away from arming and protecting itself. And also, the pressure put on post-Soviet regimes in Afghanistan, in Nicaragua, in Angola was essential for bringing down communism.”

The West, however, often offers the communist regime of Cuba financial support.

Although the sanctions against the Cuban regime implemented by then-President Donald Trump and maintained by President Joe Biden have depleted the money base of the Cuban military, some Western countries such as France, Italy, and Spain entered into cooperation agreements with Cuba, Gutierrez-Boronat said. These agreements poured money into the Cuban armed forces because those forces control the Cuban economy, he added.

The Paris Club, an informal group of international creditors, “extended a lifeline to the regime in Cuba” in the months after July 11, 2021, protest against the communist regime broke out in the country, Gutierrez-Boronat said.

In October 2021, the Paris Club, whose role is to assist debtor countries unable to repay their debts, agreed to postpone an annual debt payment of the Cuban debt due in November 2021 until 2022, according to Reuters.

In 2015, the Paris Club forgave the Cuban regime $8.5 billion of $11.1 billion in sovereign debt Cuba defaulted on in 1986. Cuba agreed to repay the remainder in annual installments through 2033, but only partially met its obligations in 2019 and defaulted the year after, Reuters reported.

“The elites in the free world have lost [their] backbone … to resist authoritarianism,” Gutierrez-Boronat said.

Cuba’s centrally planned economy is tightly controlled by the communist regime. Most of the Cuban enterprises are owned by the state. The state controls “wholesale trade, credit, foreign trade, and foreign investment,” according to a report by Coface for Trade, a credit insurance company.

“Cuba’s income per capita back in the 1950s was one of the highest in the Western Hemisphere. Today it has one of the lowest,” Jorge Salazar-Carrillo, a professor of economics at the Florida International University, wrote for The Conversation.

“In large part, that is the result of decades of failed policies and promised reforms that never materialized.”

Cuba was ruled for more than six decades by brothers Fidel and Raúl Castro, who led a 1959 revolution in the Caribbean island nation of 11 million, installing a communist-run country on the doorstep of the United States.

In 2021, Raúl Castro, as party chief, was succeeded by Miguel Díaz-Canel as a communist party chief, the country’s de facto leader, thus ending the Castro era, although he said he would continue to consult his predecessors on strategic decisions.

Frank Fang, Rita Li, and Reuters contributed to this report.

Ella Kietlinska is a reporter for The Epoch Times focusing on U.S. and world politics.

Joshua Philipp is an award-winning investigative reporter with The Epoch Times and host of EpochTV’s “Crossroads” program. He is a recognized expert on unrestricted warfare, asymmetrical hybrid warfare, subversion, and historical perspectives on today’s issues. His 10-plus years of research and investigations on the Chinese Communist Party, subversion, and related topics give him unique insight into the global threat and political landscape.