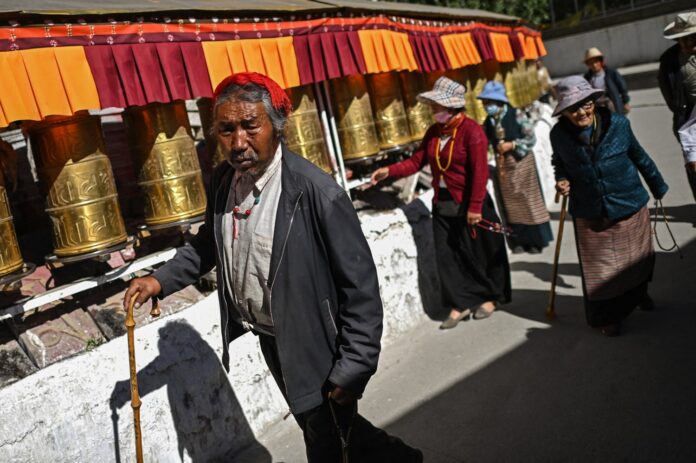 Chinese authorities have banned major religious activities in monasteries in and near Tibet’s regional capital Lhasa during the Lunar New Year, citing COVID-19 concerns. But critics call the move a further encroachment by China on Tibetan religion and national culture.

The ban announced in a Feb. 22 notice by Lhasa’s Ethnic and Religious Affairs Bureau comes ahead of a period of politically sensitive Tibetan anniversaries falling in March, when Chinese authorities regularly tighten security in Lhasa and other Tibetan areas of China, fearing protests against Beijing’s rule.

The order, a copy of which was seen by RFA, affects the Drepung, Sera, Ratreng, Sharbumpa, Sengling, Dakpo and the Tsuglakhang monasteries, sources in Tibet and in exile say. It also orders Tibetans to remain in their homes and avoid travel and gatherings during the Lunar New Year, called Losar, which began this year on March 3.

“The notice bars Tibetans from performing all the major religious activities that are usually observed ahead of and during the New Year,” said Ngawang Woebar, a former political prisoner now living in Dharamsala, India, the home of Tibet’s exile government the Central Tibetan Administration.

“The Chinese government used the need to control the spread of COVID-19 as an excuse during Losar last year, too,” Woebar said. “But in reality they are just making these moves as a precaution during the run-up to the March 10 anniversary” of a national uprising against Chinese rule, he added.

Speaking to RFA on Feb. 27, a Tibetan living in Lhasa said that Chinese security forces had already been deployed around the city.

“The Chinese government has sent large numbers of police to watch the movements of Tibetans in and around Lhasa city, and no one is allowed to visit the Dalai Lama’s Potala Palace or the Tsuglakhang for religious activities,” RFA’s source said, speaking on condition of anonymity for security reasons.

A month of anniversaries

On March 10, 1959, Tibetans in Lhasa rose up in protest of Beijing’s tightening political and military control of the formerly independent Tibet, sparking a rebellion in which thousands were killed and Tibet’s spiritual leader the Dalai Lama fled into exile in India.

And on March 14, 2008, a riot in Lhasa followed the suppression by Chinese police of four days of peaceful Tibetan protests and led to the destruction of Han Chinese shops in the city and deadly attacks on Han Chinese residents.

The riot sparked a wave of Tibetan demonstrations against Chinese rule that spread into Tibetan-populated regions of western Chinese provinces, and hundreds of Tibetans were detained, beaten or shot as Chinese security forces quelled the protests.

China maintains tight control over Tibet, and Tibetans living in Tibet frequently complain of discrimination and human rights abuses by Chinese authorities and policies they say are aimed at eradicating their national and cultural identity.