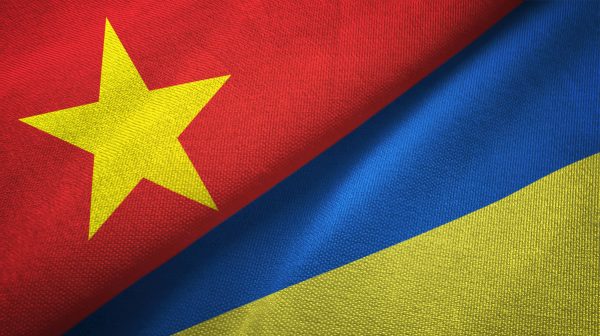 Last week, Russia launched a devastating attack on Ukraine, with tanks rolling across borders in Ukraine’s north, west, and south. Obviously, according to the United Nations Charter, there is no other word for this than an invasion. While the United States, European Union states, and many other countries around the world, including Japan and Australia, have strongly condemned Russia, the reaction from Southeast Asia, with the exception of Singapore and Indonesia, has been much more muted.

As Sebastian Strangio of The Diplomat observed, “this silence is an outgrowth of the region’s reflexive diplomatic caution and its honed preference for process over outcome. Some Southeast Asian nations may simply view the Ukraine crisis as remote and not directly relevant to their interests.” Strangio’s explanation is somehow understandable, but Vietnam differs in a number of senses from the rest of the Association of Southeast Asian Nations (ASEAN).

Vietnam is particularly torn in this instance given that it enjoys a good relationship with both Russia and Ukraine. Vietnam can’t afford to stay totally silent on the war, but the question is how it would articulate its position. The special strategic relationship between Vietnam and Russia is widely acknowledged, but few have much knowledge of the Vietnam-Ukraine comprehensive partnership.

In August 1991, Ukraine became an independent country amidst the collapse of the Soviet Union. Four months later, Vietnam recognized Ukraine as a state and formally established diplomatic ties on January, 23 1992. The development of diplomatic ties has been seen by both sides as a continuation of their “traditional relations” from the Soviet era.  Indeed, during the Soviet era and the Second Indochina War (1955-1975), Ukraine as part of the Soviet Union provided assistance to Vietnam and trained thousands of Vietnamese students, many of whom upon their return to Vietnam became high-ranking government officials. Since the establishment of the diplomatic ties in 1992, Vietnam-Ukraine cooperation has expanded and become one of the most dynamic and comprehensive relationships that Vietnam enjoys with the nations of the former Soviet bloc, with the exception of Russia.

In 1994, during then Vietnamese Prime Minister Vo Van Kiet’s visit to Ukraine, the two nations founded an Inter-Governmental Committee for Economic, Trade, Science, and Technology Cooperation. Since then, the Committee has held 14 sessions. In addition, the two sides have also established other cooperation mechanisms, including an Inter-agency Sub-Committee for Science-Technology Cooperation and an Inter-Governmental Committee for Military-Technical Cooperation. In 2011, Vietnam and Ukraine raised their relationship to the level of a “comprehensive partnership”  and pledged to advance it further. The two countries have also held political consultations at the vice foreign ministerial level.

As of January of this year, Vietnam was one of Ukraine’s five largest Asian trading partners, while there were 10,000 Vietnamese nationals living in and approximately 1,400 Vietnamese students studying in Ukraine. On January 23, Vietnamese leaders sent congratulatory messages to Ukrainian counterparts to mark the 30th anniversary of the diplomatic ties between the two nations. In 1995, the Vietnam-Ukraine Friendship Association was established on the prime minister’s initiative in an attempt to consolidate and enhance effective cooperation and mutual understanding as well as the traditional friendship and solidarity between the people of Vietnam and Ukraine. Members of the association are those who once studied and lived in Ukraine. Notably, Vietnam has similar friendship associations with Russia and other former Soviet republics.

Since the escalation of tensions between Russia and Ukraine, the spokesperson of the Vietnamese Ministry of Foreign Affairs has twice articulated Hanoi’s position regarding the situation. On February 23, a day before Russia launched its full invasion, the spokesperson said that Vietnam “was monitoring with interest recent tensions relating to the Ukraine situation and called on parties to exercise restraint, enhance efforts to hold dialogues and promote diplomatic measures to address peacefully disagreements on the basis of respecting the United Nations Charter and fundamental principles of the international law, making a contribution to ensuring peace, security, and stability in the region and across the world.”

On February 25, the day after Russian troops and tanks rolled into Ukraine, the spokesperson said that Vietnam was “deeply concerned” about the conflict and “called on involved parties to exercise restraint, adhere to the United Nations Charter and fundamental principles of the international law, take no use of force, protect civilians and continue to hold dialogues to seek a peaceful resolution, making a contribution to ensuring peace, security, stability, and cooperation in the region and across the world.”

Prima facie, these statements reveal that Vietnam faces a dilemma in how to respond to the war in Ukraine. Reading between the lines, however, Vietnam is sending different messages not only on Russia and Ukraine but also with regard to other potential future conflicts.

By referring to and calling involved parties to respect and adhere to the U.N. Charter and international law, Vietnam was implicitly condemning Russia for invading Ukraine. Apparently, according to Article 2(4) of the U.N. Charter, Russia sending forces into Ukraine, a sovereign state, constitutes an act of aggression. As Strangio observed, the Russian invasion of Ukraine consolidates the illegal use of force by a powerful state against a smaller state. Furthermore, by invoking historical issues and using the pretext of protecting Russian-speaking populations in the two separatist regions Donetsk and Luhansk of Ukraine, Russia is advancing a dangerous precedent for the waging of a war of aggression. Given that China invaded Vietnam in 1979 in part on the pretext of protecting the country’s ethnic Chinese population, and is currently laying claim to most of the South China Sea on the basis of groundless “historical” claims, Vietnam is certainly not supportive of Russia on this point.

Last December, Vietnam and Russia issued a joint statement outlining plans to further deepen their comprehensive strategic partnership in scope between now and 2030, emphasizing the special strategic relationship established in the Soviet era. But with Ukraine, Vietnam also bears a debt of gratitude for the former’s assistance during its wars against the French and Americans and currently has a comprehensive partnership. Vietnamese “bamboo diplomacy” indeed faces a difficult dilemma, needing to avoid taking a side but nonetheless needing to signal its opposition to Russia’s aggressive actions.

Perhaps nothing better reflected this dilemma than the gap between the carefully nuanced critical speech given by the Vietnamese representative at the recent emergency session of the U.N. General Assembly and Vietnam’s abstention on the March 2 resolution deploring Russia’s invasion of Ukraine.