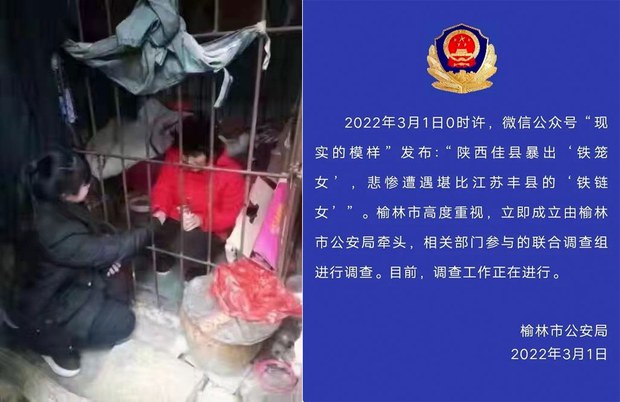 Police in the northern Chinese province of Shaanxi are investigating the case of a woman locked in an iron cage in Jia county, amid ongoing public anger over the trafficking of women and girls in the wake of the chaining of a woman in Jiangsu.

A man surnamed Li has been detained after footage of the woman in the cage was livestreamed by Li to social media.

In the video, Li names his “wife” as Xiaoyu, and says he locks her up in the cage when he goes out, to prevent her from running away.

According to Li, he “picked up” Xiaoyu, whom he describes as being “of unknown origin,” and brought her to live with him in 2009, since when Xiaoyu has tried to escape “many times,” according to the Jimu News website.

“The investigation is currently under way.”

Police have since detained a man surnamed Li, according to media reports.

Last month, an official investigation into a the situation of a woman found chained up in the eastern province of Jiangsu prompted online calls for a wider inquiry into rampant human trafficking and official collusion with criminal gangs who buy and sell women for “marriage.”

Comments on the Shaanxi story on Weibo appeared equally unimpressed.

“The logic of this vicious circle is patriarchal preference [for sons] leads to fewer women in this area, which means low-status men can’t find spouses, which means people are bought and sold, which leads to entrenched preferences for sons over daughters,” @M_Emilia commented on Thursday.

@Miss_Ding_Jia_Er_babyyang said there are already doubts around whether the ID offered to the authorities was fake or now.

“We don’t know if this [marriage] was entered into voluntarily,” the user wrote. “We need to find out the facts.”

@little turtle wrote: “The biggest problem is that buyers [of women] are punished too lightly,” while @Ni_Lianquan called for the death penalty for trafficking in women and children.

“So horrible, hateful,” @Quanzhou_little_speaker wrote of Li. “[Should be] severely punished,” while @If_one_day_999 wanted to know “How come so many old men are able to ‘pick up’ women?”

Tip of the iceberg

Shaanxi-based current affairs commentator Huang Ping said the caged woman’s case had shown that the Feng county chained woman’s case was just the tip of the iceberg, and involved the collusion of local officials.

“It couldn’t happen without them,” Huang told RFA. “Ordinary people are aware of a lot of issues, and fewer and fewer of them trust the government.”

“But most daren’t speak out due to fear,” he said. “They also daren’t tell the truth.”

China’s ministry of public security announced a “strike-hard” anti-trafficking campaign for the rest of this year following a teleconference on the issue on March 2.

“The only thing they pay attention to and really care about is any person or thing that could threaten the regime,” he said. “[The rest] is just a bid to appease public grievances.”

“If they had really wanted to do something about this, they would have done it a long time ago, not waited for it to be livestreamed on the internet,” Huang said.