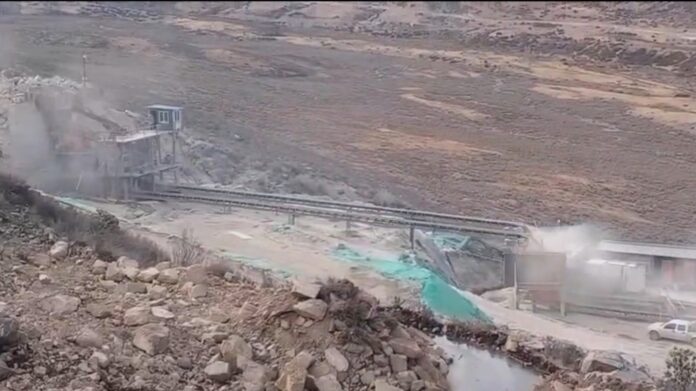 Chinese crews working on a government-ordered railway line are tunneling through a mountain sacred to Tibetan residents of Sichuan, using artillery fire to weaken the rock face and speed their work, Tibetan sources say.

The destruction of Asal Dzari mountain, located in the Toe township of Nyakchu county in the Kardze (in Chinese, Ganzi) Tibetan Autonomous Prefecture, has now been under way for several months, according to sources in Tibet and in exile.

Tunnels being built through the mountain will help extend new rail lines connecting Nyakchu with the Tibetan regional capital Lhasa, a Tibetan living in the region told RFA, speaking on condition of anonymity for security reasons.

“The Chinese government has said that Asal Dzari mountain stands in the way of these two regions where they are building the railroads. Therefore, there are many tunneling projects being carried out around the mountain at the moment,” he said.

At the same time, the government is extracting valuable minerals from the mountain and harming the region’s fragile ecology, RFA’s source said. “However, it is unclear which minerals are being taken out, and local Tibetans are not allowed to go near the work sites,” he added.

Tibet has become an important source of minerals needed for China’s economic growth, and Chinese mining and infrastructure operations in Tibetan areas have led to widespread environmental damage, including the pollution of water sources for livestock and humans and the destruction of sacred sites, experts say.

Asal Dzari mountain is sacred to local Tibetans and contains many valuable mineral deposits, a Tibetan living in exile confirmed, citing sources in the area and speaking on condition of anonymity to protect his contacts.

“And the Chinese are now using artillery against the mountain to help extract its minerals, leaving local residents in immense difficulties and causing the death of some of their livestock,” he said.

Another railway now being built between Sichuan and central Tibet’s Nyingtri prefecture will boost tourism and trade along a previously unconnected southern route, but will also strengthen Beijing’s control over a disputed region bordering India, state media and other sources say.

The project is the second major railway to be built by China in Tibet after a northern line connecting Golmud in northwest China’s Qinghai province with Lhasa was completed in 2006. The line is the highest railway in the world.

Regional experts say that the Chinese rail lines, when completed, will tighten Beijing’s grip on Tibet, a formerly independent Himalayan country invade by China more than 70 years ago and governed by China’s ruling Communist Party ever since.