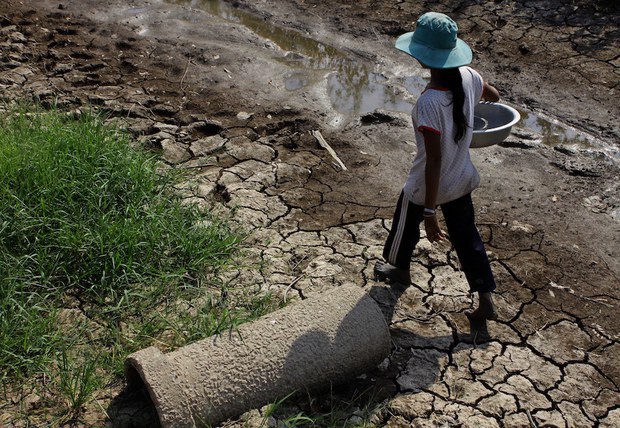 The Mekong River Delta along Vietnam’s southern coast will show increased levels of salinity this March due to upstream dams on the river and high seas during the dry season, the Vietnamese government said of a recurring problem that has worsened in recent years.

The intrusion of salty seawater into the freshwater Mekong Delta, a 65,000 sq km (25,100 sq mile) region that is home to more than 20 percent of Vietnam’s 98 million people, threatens the survival of crops, marine life and farmed seafood.

The General Directorate of Water Resources (GDWR), under the Ministry of Agriculture and Rural Development, told local media Monday that high sea levels in March will cause increased salinization of four grams per liter as far as 35 to 50 kilometers (20-30 miles) inland along the delta’s estuaries, possibly reaching as far as the Vam Co River, or about 55 to 65 km (35-40 miles) inland.

Upstream water flow at an area near the town of Kratie in eastern Cambodia, as well as at Tan Chau and Chau Doc in Vietnam’s southwestern An Giang province, decreased this month, the DDWR said.

Also on Monday, Vietnam’s National Center for Hydro-Meteorological Forecasting said that water levels of the Mekong River’s main water flows have been changing slowly and are about 0.1-1.0 meters (4 inches to 4 feet) lower than the avarage levels over the past few years.

On Feb. 7, Vietnam’s Southern Institute of Water Resources Research (SIWRR) said that the Mekong Delta had been suffering from early salinity instrusion since the begining of the dry season as China had been limiting water discharge from its upstream hydropower plants.

According to SIWRR, China’s decision to cut water discharge from its storage reservoirs to generate electricity has been one of the key causes of the salinity levels.

The institute also said water flows would quickly decrease soon as water discharge from storage resevoirs in the basin continued to be limited.

Water flow during the current dry season, between November 2021 and April 2022, depends heavily on the operation of upstream hydropower plants, the institute said.

He also said that if China could not be forced to discharge water, Vietnam should use its own fresh water resources to reduce the risks of salinization.

The MRC therefore called on China to share all its data on water flows.

China is reported to have built 11 major hydro-power dams along the Mekong River. According to environmental experts, the dams not only affect the river’s flows but also reduce the flows of fertile silt and fish downstream as well as overall biodiversity.

Translated by Anna Vu. Written in English by Eugene Whong.