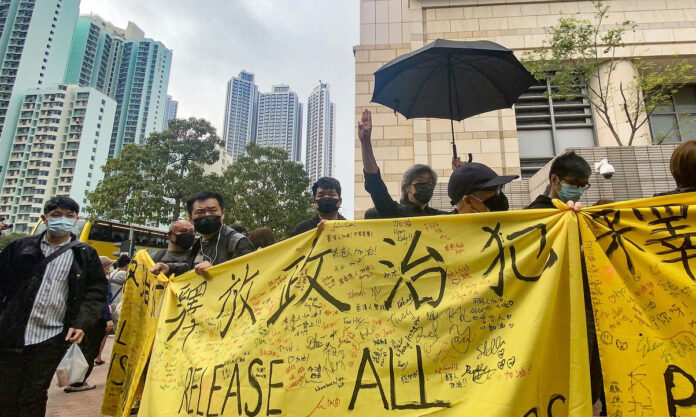 One year after dozens of opposition politicians and pro-democracy activists were put behind bars for “subversion” after taking part in a democratic primary in the summer of 2020, Hongkongers in exile say the mass arrests, which were widely condemned by the international community, struck a “devastating blow” to the city.

The Jan. 6 raid by police enforcing a national security law banning public criticism or organized action against the government targeted 55 people, with 47 placed on notice to report to their local police station on Feb. 28, 2021.

Thirty-three arrestees said goodbye to their loved ones, sent messages of defiance or encouragement to the people of Hong Kong, and have remained behind bars awaiting trial ever since.

“I felt the most for those who were fathers with very young children,” former opposition lawmaker Ted Hui told RFA. “I never thought that [one day] children would suddenly not be able to see their fathers for a long time, overnight.”

“As a dad myself, those feelings ran very deep.”

“Naturally, Joshua is the one I miss the most, but also the rest of the team, including Lester Shum and Gwyneth Ho,” Law said. “We all shared a very deep, revolutionary friendship, and we have all supported each other for a long time on the road to democracy.”

“If I were to see him again, I think I would probably burst into tears and be unable to speak,” Lee said. “What the primary election did for Hongkongers was to make us realize the true nature of the … CCP regime.”

U.S.-based activist Sunny Cheung was part of a campaign getting people to turn out and vote in the primary, titled “Conquer fear through action.”

“Everyone found the courage to overcome the fear ushered in by the national security law,” he said. “That’s how I felt during the primary, that it wasn’t easy for the people of Hong Kong.”

“Looking back now, it’s very moving to me, that so many people were willing to come out.”

Some 610,000 people turned out to vote in the primary, selecting 30 candidates out of a slate of 52 to fight seats for pro-democracy camp in a general election that was postponed by the government, which then rewrote the rules to ensure only supporters of the CCP could run.

“In hindsight, that was the last democratic election in which citizens could participate directly,” Hui, now in exile in the U.K., said. “It’s sad.”

There were comments at the time from pro-China pundits that the primary could be in breach of the law. But nothing happened for several months.

Then, just when everyone thought the matter closed, 1,000 national security police were deployed to make a series of arrests of 55 activists on suspicion of “subversion,” for taking part in the primary.

Of those arrested on Jan. 6, 2021, 47 have been on remand for up to a year, awaiting trial for “subversion” under Beijing’s draconian law.

Hui said he had barely left Hong Kong when the arrests started happening.

“I had barely been gone a month from Hong Kong, and all of my fellow party members and comrades-in-arms had been arrested,” Hui said. “My mood suddenly plummeted.”

“Don’t forget that some of the people who took part in the primary were very moderate in outlook, people who had never really taken on the government,” he said. “So it’s unimaginable what could happen next in Hong Kong, if even they are suffering.”

Those who took part in the democratic primary spanned the political spectrum from radical protesters to the most moderate pro-democracy figures, and included disabled and other grassroots activists.

Cheung said there is now a dearth of information coming from the opposition camp on his social media feed.

“Hong Kong is in a state of information vacuum,” Cheung said. “Now that all of the politicians have been arrested, you log onto Facebook, and the feed has gone very quiet.”

“All of those politicians would make statements in real time to let the public know if something was happening, or to let them make up their own minds,” he said. “It was an unprecedented crackdown, in which everyone was arrested, even the most moderate.”

“It was a devastating blow.”

Cheung said he remembers watching dozens of former fellow activists and well-known opposition figures report to dozens of police stations across Hong Kong on Feb. 28, 2021, knowing they were very likely going to be locked up that day.

“I was constantly watching differing livestreams, watching the last moments before these people went into the police stations, their words, their facial expressions, their body language,” he said. “The messages they wanted to send to the people of Hong Kong.”

‘I miss them so much’

Many remember the footage of newly married democracy activist Lester Shum and his wife saying goodbye outside the police station, before he was jailed on remand, or former district councilor and former journalist Gwyneth Ho leaning her head of the shoulder of grassroots activist Eddie Chu and smiling into the camera.

Forty-seven of those who went into police stations that day were formally charged with “conspiracy to subvert state power,” and brought to court for a string of marathon bail hearings lasting several days, from which the media were excluded.

Thirty-three were jailed on remand, while the 14 who were granted bail have been silent ever since.

Cheung said the loss to Hong Kong was immediate and irreparable.

“The crucial thing was that they added to public discussion, gave a point of view, and did political analysis,” he said. “Without them, there won’t be the same insight when it comes to monitoring what the government is doing.”

“I miss them so much,” Cheung said. “I think of them every day … I would love to tell them that they are not alone.”