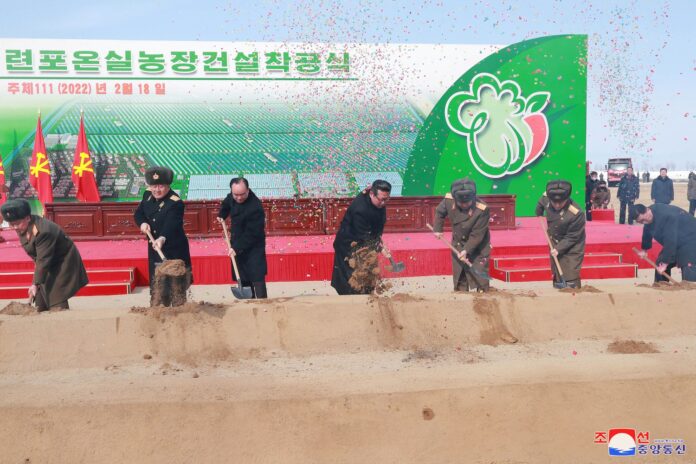 A North Korean greenhouse project promised to provide citizens of a rural province with more vegetables than they could ever eat. But two years later, the food is bypassing their mouths and being shipped to the capital Pyongyang to be served to the country’s elites, sources told RFA.

Authorities started the greenhouse farm project, the first of its kind in North Korea, in Jungphyong village, which is part of Kyongsong county in the northeastern province of North Hamgyong. The farm sits on 490 acres of land and includes about 300 greenhouses.

“The authorities loudly propagated that the residents of North Hamgyong and Kyongsong county would greatly benefit from the greenhouse construction project, but the vegetables ended up not being for people like us,” a resident of the county told RFA’s Korean Service.

The newspaper report said that the vegetables were delivered to the people of the province last year, according to the source, who requested anonymity for security reasons.

“But in actuality, ordinary residents of Kyongsong county have never been given a single vegetable grown from those greenhouses,” he said.

The dismay is all the greater because authorities relied on residents of the county to build the project.

“They worked for over a year. Not many people complained because they had the hope that they would be able to eat their fill of vegetables in the very near future,” the source said.

“None of the vegetables went to the province. I heard from a friend who works at the greenhouse farm that most of the vegetables were selected as a No. 9 product and loaded onto the train to Pyongyang,” he said, using the government designation for items intended for use by the Kim family.

The Jungphyong Vegetable Greenhouse Farm was a pilot program. Now that it has been consistently producing, the government has plans to expand the program.

Another greenhouse farm is already under construction in nearby South Hamgyong province’s Hamju county, another Kyongsong resident told RFA.

“The residents of Hamju county have been mobilized for the construction work. Even when they complete their new greenhouse farm, they will never have a chance to eat any of the veggies,” said the second source, who requested anonymity to speak freely.

“When they were building the greenhouse farm up here in Jungphyong, the local housewives supported the construction effort, even sending in homemade soil for use in the farms. Despite their personal sacrifices, the housewives never received any vegetables,” she said.

High-ranking officials who live nearby instead call up the farm and take the vegetables as they please, the second source said.

“They never lifted a shovel, but they are taking full advantage of the farms. Even in the middle of winter, a car will come to their house every few days loaded with fresh cucumbers, crown daisy and lettuce from the greenhouses,” she said.

“Occasionally, if you pass in front of a greenhouse farm, you will see vehicles with license plates from powerful organizations. … As with everything in North Korea, the greenhouse farm wasn’t really for the local people as they said. It is only for the privileged and the elite,” the second source said.

The authorities have plans to expand greenhouse farms to other provinces.

“Following North and South Hamgyong, they are talking up how they will have these greenhouse farms in every province in the near future. No matter how many they build, what will change? For ordinary folks like us, vegetables are still a pie in the sky dream,” she said.

Translated by Claire Lee and Leejin Jun. Written in English by Eugene Whong.