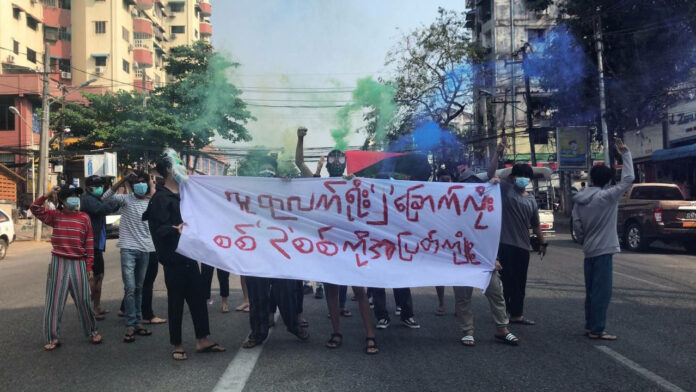 Sources in the city told RFA that security forces detained at least 85 youths in February using tactics that included posing as fellow activists on social media to find information on their locations. They said the arrests marked a new high for the number of Yangon protesters detained in a single month, adding that while a few have been released, most remain detained at various police stations, and some have been taken to military interrogation camps.

Many of those arrested were taken into custody for taking part in the so-called “Six Twos Revolution” strike in a show of resistance to the junta, despite its brutal crackdown on critics. During the strike, civilians joined monks in the streets displaying banners with the numbers to signify the continuation of mass strikes and demonstrations a year after a protest on Feb. 22, 2021, in which millions of people participated, three weeks after the military overthrew the country’s elected government.

Speaking to RFA on Wednesday, a young man from Yangon’s Shwepyithar township said that the military was increasingly “using traps” to arrest young people.

“They have been arresting people continuously since the protests. Once a person is arrested, they obtain information from his or her cellphone and make more arrests,” he said, speaking on condition of anonymity for fear of reprisal.

“Suppose a person is caught, they could get info about people linked to him through his phone. His contacts will get arrested like that.”

Some youths said arrests were also made after security forces checked Facebook profiles or other social media posts that show whether someone espouses anti-military views or if they contacted people to donate money to the resistance. Others were arrested when they communicated with friends who were released but remained closely watched by the junta.

As many as 17 youths were arrested during a three-day period beginning on Feb. 17 in Shwepyithar township, they said.

Increasingly at risk of arrest

A woman who took part in a Yangon city protest told RFA that she has become more cautious after learning that junta forces had used phones confiscated from people they had detained to make additional arrests.

“After arresting a protester, they often would use his phone and pretend he had been released and set a trap to catch his contacts,” said the woman, who also declined to be named.

“Of course, many methods are being used. And so, we are now more cautious when we are asked to reconnect with each other on the assumption that they had been captured but released. We are trying our best not to get anyone arrested.”

Sources told RFA that in Yangon’s Mayangon township, a group of anti-junta youths dispersed after a protest only to be followed home by junta operatives. An eyewitness said that at least one youth was killed, and six others arrested when the military raided a house in Mayangon’s Ward No. 3 on Feb. 25. RFA was unable to confirm the name of the man who was killed. On the same day, sources said, authorities also arrested five women in the township.

Nan Lin, a spokesman for the Yangon University Old Students Association and a protest leader, told RFA that the youths arrested in Mayangon “are some of the staunchest comrades of the movement.”

“As our protest groups in Yangon plan out various forms of protests to create a strong powerful movement, the other side is also trying to find new ways to suppress these situations,” he said.

“So, we can see that some of our comrades have been hit hard amid this power struggle.”

Protesters in Yangon said the military and police have become even more vigilant using patrol cars and CCTV cameras.

Junta Deputy Information Minister Zaw Min Tun told RFA the arrests were part of a bid to “stabilize the situation” in Yangon.

“What we are doing is giving priority to restoring stability throughout the country,” he said. “Most of the arrests were made in connection with terrorism-related activities. Many arrests of terrorists and bombers have been made according to information gathered from those associated with them.”

But a female member of the Pazundaung and Botataung Township Youth Strike Committee said that the young protesters had risked their lives in opposing the junta, knowing they could be subject to a harsh military crackdown.

“Once you step on the [protest] ground, your life is in a state of uncertainty,” she said. “I realize I may never be able to return home. It could be a lifelong journey. Or I might get arrested. The reason we are risking ourselves to continue these protests is to nurture a constant awareness of the revolutionary spirit among the people.”

RFA was able to confirm the arrests last month of 85 youths from the Yangon townships of Shwepyithar, Mingalar Taungnyunt, Thaketa, Hlaing, South Dagon, North Dagon, Thingangyun, Kamaryut, Mayangon and Yankin. However, sources said that the number of arrests is likely be much larger.